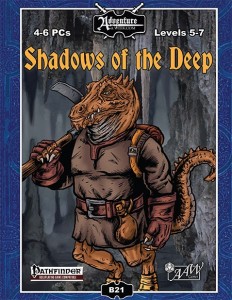 Still here? All right! The town of Pindleton, a farming community that houses no legendary heroes, but which drips in local color, has been suffering -the picturesque area has been hounded by inexplicable raids, to the point where the desperate villagers had to even enforce a curfew. The town with its families and the level of detail that is provided, including a budding sorceror just asking for the cohort-spot and copious red herrings, is surprisingly detailed, but not mapped – still, I have to congratulate the author for managing to evoke a sense of idyllic tranquility disturbed that is hard to conjure forth.

Depending on the steps and investigations taken, one or more of 3 sample raids may kick the module into high gear – the pretty easy tracking pointing the PCs towards the obvious dungeon awaiting them -a cramped warren that seriously will impede the progress and capacity of the adventurers, rendering the dread shadow scale tribe of kobolds a powerful force indeed – the copious traps and environmental restrictions alongside the numerous secret doors will make for a supreme challenge – remember the by now cult example of how kobolds can take down high-level adversaries with smarts? Well, in the hands of a capable DM, this module is just that. From dire weasels to numerous named kobolds with class levels to a shadow dragon hatchling, the shadow scales are deadly adversaries and once the exploration of their warren is done, PCs WILL have newfound respect and/or hatred for the kobolds. Worse, they may realize that these exceedingly-well-organized kobolds only have been an expedition force, with the true power of the shadow scales still remaining at large…somewhere.

Editing and formatting are very good – while I noticed some minor punctuation glitches et., I encountered no game-breaker level glitches. Layout adheres to AAW Games’ beautiful 2-column full-color standard and the pdf comes fully bookmarked for your convenience and hyperlinked. The pdf’s neat cartography of the warrens comes with a player-friendly version that thankfully presents the secret doors as regular walls, so if you cut it out, you will have no issues.

Daniel Marshall’s talent creating believable, cohesive social structures can be seen in full force in the sample town and indeed, extends itself to the adversaries encountered herein. While the builds are not exceedingly complex or mind-shattering, this is still a neat example of a conservative module with copious read-aloud texts, one that takes the “Small, but fierce” slogan of kobolds popularized by Kobold Press and provides the module to drive exactly that truism home – a challenging dungeon crawl with smart adversaries, this is well worth a final verdict of 4.5 stars, rounded down to 4 for the purpose of this platform.

You can get this module here on OBS!
Endzeitgeist out.