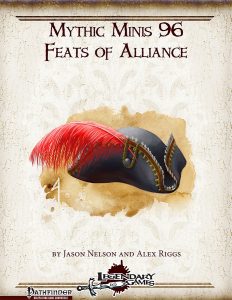 -Betrayal Sense: Nets you a passive chance to notice disguises and creatures intending to attack you by surprise. If you and foes act in a surprise round, you may expend mythic power to keep foes from acting…which is pretty OP, considering that they get no save and how powerful hitting first is in a mythic context. At least foes with a higher tier than you are immune, which is what keeps this from going totally off the rails.

-Improved Bravery: Bonus applies to Will-saves and is doubled vs. fear. Additionally, you are no longer affected by partial effects from non-mythic fear-based effects on a successful save. Nice.

-Legendary Influence: Gain mythic version of the feat gained as well for 1 influence gained. While séance-ing, you may expend mythic power to reassign feats to spirits, multiple ones at higher tiers. Very cool!

-Inspiring Bravery: Increase the radius affected, with Improved and Social Bravery synergy; via mythci power, the effect may be temporarily maintained even if you’re affected by negative conditions that would end it.

-Quick Favor: Use mythic power to hasten information gathering and 1/day shift a creature’s attitude and make a request in only 5 rounds. Neat!

-Timely Coordination: Add 1/2 tier to bonuses granted; they apply to atk and skill checks, but only when you and an ally’s readied action are triggered. Nice, though it feels like it could have used an additional benefit.

-Unimpeachable Honor: Automatically succeed opposed Cha-checks to resist commands that violate your beliefs/code. All damage you deal to allies while compelled to do so is automatically nonlethal. Finally, when violating your code, you may expend 3 uses of mythic power to cast atonement on yourself; you still need to atone. I love this one. Two thumbs up.

-Willing Accomplice: Use Bluff to aid an ally’s social and thieving skills and allies may substitute your Bluff for their own check. Not a fan of this one, since it marginalizes the skills you helped for; basically, it makes your one Bluff skill substitute 5 skills of an ally. That’s not fun.

Jason Nelson and Alex Riggs deliver an interesting collection of mythic feats here, some of which employ truly interesting and smart mechanics. While not all of them are winners, the gems do mitigate the in my opinion slightly problematic ones. Hence, this ends up as pretty much a mixed bag for me, slightly on the positive side, which is why my final verdict will clock in at 3.5 stars, rounded up.