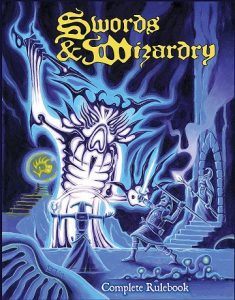 Ähem. I feel old. 😉 This is my birthday-review, my present from myself to myself, so please bear with me regarding the obvious deviation from my usual standard regarding reviewing. Kidding aside regarding age and the like…when I started playing, believe it or not, you young ‘uns, the game didn’t have that much to do with math. Sure, we needed it. But in contrast to taking hours upon hours to properly calculate the statblock of high-level foe xyz, those were simpler times. Heck, for the first 6+ years of my playing career, I didn’t use any kind of battlemap…go wrap your head around this!

Why am I telling you this? Well, because this book basically represents the game I grew into gaming with; this is the old-school simple and distilled version of gaming. No looking up feats, no looking up complex interactions, no optimization. Different level-up caps for different classes. Fixed saving throws determined by level…next to no means to power-game and a lot of house-rules that continuously grew.

Okay, so what does this provide? Well, we already have the 6 classic attributes. Strength determines chances to kick open doors and modify carrying capacity, with melee to hit and damage modifiers ranging from -2 to +2 and -1 to +3, respectively. Fighters can use Strength for ranged weapons…if you follow the original rules. Constitution determines your chance to survive being raised from the dead…and nets you anything from -1 to +1 hit points per HD. High Charisma and Wisdom net you bonus XP (wrap your head around that!) and Dex, obviously, is important for all the thief tricks. Thief? Yup, once upon a time, it was thief, not rogue, ladies and gentlemen.

The classes provided herein cover the assassin, cleric, druid, fighter, magic-user, monk, paladin, ranger and thief…and yes, astute reader: Some of these are simply better than others. Why? Because back in the day, you needed damn good stats to qualify for some of them – which is still represented in optional rules. (Yep, that’s where the “paladins are rare and all good-looking”-trope came from; Cha 17+ minimum. 18, btw., is the maximum you’ll get with your 3d6…

Similarly, dual-classing and multiclassing are two different experiences, with dual-class characters requiring much more XP…but I digress. Non-human races often have an advancement cap for classes, but once again, alternate rules for this less beloved feature are presented. Oh, know what’s also tricky: All classes cap HP at one point; depending on your class, you’ll thereafter only get a single hit point per level.

While this may *sound* annoying, it’s not – it keep the dreaded high-number mathematical breakdown all contemporary systems suffer from at bay. Oh, and alignment? Law, Neutrality, Chaos. That’s it.

Okay, so item-purchases and equipment work pretty much as expected…but what about AC? There are two ways and two camps on how to handle the concept: Ascending and Descending AC. When you use descending armor as a rule, each character gets an unarmed AC of 9, with the lower results being better – a plate would net you -6 AC, for example. Ascending is pretty much the opposite and works like just about all contemporary systems in the d20-arena: 10 + value. Such stats are provided in brackets. So, whether you prefer one of the other, this book has you covered. Movement rate is similarly simple on ground and overland movement.

Swords and Wizardry, however, is NOT a simple reproduction – it streamlines and takes away some of the needlessly clunky components: Saves and XP, for example, both of which, frankly, have been sources of endless consternations among my players. (“Why is that a save versus spells and not deathrays?”) So no, this is not simply an exercise in nostalgia. The round and its breakdown, swift and quick, is also presented in a concise manner – with multiple alternatives for specific tables. That being said, I really think a flat Attack-bonus would have been the simpler choice regarding attack rolls. Why? Because you have to consult massive tables dependant on the class to determine whether you hit or not. Sure, it’s not rocket science…but it’s a component I do not use in my OSR-games…boo and hiss, I use an atk-bonus. 😉

Still, do not take this is criticism on a formal level – it is just me stating a preference. Before I go on a further tangent or you stop reading – when using ascending AC, an imho easier to grasp table and one that does work well, and does the job admirably. Similarly, my games do have neutral clerics – an eventuality btw. also covered in alternate rules/referee-suggestions. Sample stronholds and information on hirelings complement this section…and then, there are SPELLS. A metric ton of SPELLS. They have a name. A range. A level. A duration. That’s it. Simple and to the point.

This is where the referee section begins and it is this section alone that may be worth the download. Why? Because, beyond general and sound advice for GMs, the section actually sports multiple, nice dungeon-maps as well as tables upon tables you can use to generate creatures. Similarly, wilderness encounters and movement rates are covered…oh. And yes. Mass combat and siege combat. And unlike pathfinder’s impotent, sucky siege engines (I house-ruled those so that PCs actually fear them), they friggin’ kill you. Trebuchet hits you? You’re DEAD. No, seriously. Game over, man. Game over. Call me a bastard GM…but I like that. Even Aerial Combat gets its section and is handled simply via maximum course alterations and minimum space between alterations – that’s it. And while this may sound simple, it actually is a pretty ingenious system to make compelling dogfights.

And yes, before you ask, naval combat is here as well. These are the complete rules, so this book also sports an array of monster stats and advice on creating them – and if there is one thing that is a weakness of this book…well, alas, it’s this section. You see, sans the massive math-laden statblocks, old-school games did tend to prosper in the fluff departments; where monsters had ecologies, societies, tactics etc. all spelled out in lavish detail, often inspiring the referee. You won’t find that here. You only get the hard, cold and brief statblocks. That’s it. The magic item-section on handing out treasure and the appropriate tables (yes, including cursed items) follow a similarly minimalistic approach – one suitable for the core book, yes…but also perhaps the one aspect where the book does not excel as much as in the previous sections.

The pdf, obviously, does feature a char-sheet, btw….and an impressive, very detailed index that makes using this book very easy.

Editing and formatting are top-notch, I noticed no significant glitches. Layout adheres to Frog God Games’ two-column b/w-standard with a ton of new b/w-artworks that breathe the tradition of the classic – including ample wizards in pointy hats. The pdf comes fully bookmarked for your convenience and yes, ladies and gentlemen…the Erol Otus cover alone may be worth downloading this. Unfortunately, I don’t have the print version of this book…but I *do* own a ton of Frog God Games-material and they *ALWAYS* are great books.

Dennis Sustare, Marv Breig, Jason Cone, Allan T. Grohe Jr., Jerry Mapes, Bill Webb and Matthew Finch have created perhaps the best OSR-version for classic, fantasy roleplaying…and beyond simply being a highly customizable, easy to learn system, it affords for a great change of pace when you find yourself tired out by too many statblocks to crunch. This very much is not only a blast from the past, it is a great system to teach roleplaying…because it’s simple. It’s simple and elegant in its design without being restrictive. The “referee has the last call” rule trumps all and there frankly isn’t much wiggle-room to power-game. This is delightfully easy to grasp and master and in presentation and quality a superb offering.

Oh, and it’s FREE. As in: Doesn’t cost a single damn dime. As in FREE. It takes the disparate classic rules and streamlines them without eliminating their wealth of options. Swords & Wizardry is, for traditional fantasy, my go-to OSR-rules-system and I wholeheartedly encourage you to check this out…who knows, perhaps you’ll have an eureka effect as well; either because you haven’t played a system this rules-light…or perhaps because you forgot how much FUN it actually can be. It’s a different type of fun, when compared to the new systems, sure. But it is one I never want to miss, a type of game I’ll always gladly return to. Get this. My final verdict will clock in at 5 stars + seal of approval.

You can get this great, massive book here on OBS and here on tabletoplibrary for FREE!