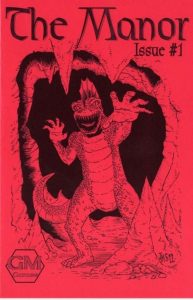 The first of the OSR-zines of the Manor-series clocks in at 24 pages, 1 page front cover, 1 page editorial/ToC, 1 page advertisement, leaving us with 19 pages of content, laid out for digest size (6’# by 9’’/A5), meaning that you can fit up to 4 of these pages on a sheet of paper when printing them out.

The material herein assumes a silver standard and assumes a generic OSR-system, claiming no explicit compatibility with one of them. Presentation-wise, we get ascending AC, no differentiation between melee damage-types. Slightly odd: While certain terrain features note the type of save required to resist a given effect, creature statblocks don’t note this. That being said, it is quite obvious what kind of save to apply, making this aspect of the booklet a mostly cosmetic complaint. HP and HD are both mentioned.

As for the supplemental material, there is a brief poetry slam-style poem about umberhulks (fans of Beat-literature will get a chuckle out of it!) accompanied by a nice b/w-artwork in a comic-like style. Jason Sholtis, as a guest-author, provides a d12 table of things that may be found in a troglodyte’s dung heap. The table contains classics with nice flourishes – like “A ring of protection. Finger included.” This is also a nice way to note the formatting peculiarity here, namely that magic items are not italicized. The one character herein that does have a spell-book is designated as a magic-user, in proper old-school manner, but does not get a premade spell-list.

Now, as you can probably glean from the cover-image, this is a little e-zine very much in the tradition of the classic old-school DIY-zines and it embraces this aesthetic in both presentation and design. We get a surprisingly nice side-view map for the short micro-adventure here, and while I would have loved to see a key-less version, for the low price-point, I was pleasantly surprised. That being said, the map has no scale noted – we assume mind’s eye theatre here.

The manor is intended for mature audiences, but apart from a slightly raunchy pun, there is nothing I’d consider to be problematic for kids in this magazine. Presentation of locales and encounters first depicts what is readily apparent, then elaborates/notes the truth behind a scene in shaded text. Minimalist and elegant.

All right, so, the lion’s share of the content herein is devoted to material for GMs; to be more precise, we get a brief sidetrek-adventure, a creepy locale/adventure-setup and a particular vendor. Since this review will proceed to discuss these, I hereby urge players to jump ahead to the conclusion of my review. From here on out, the SPOILERS reign.

All right, so let’s start with the micro-adventure: We don’t get read-aloud text for it, and the premise is simple: Paco and his family are working a salt pit; relatively unbothered by the authorities, with the exception of the due taxes. Now, Paco has an issue: Something has taken up residence in the mine, and, bingo, he’d like the PCs to clear out the threat. While he can warn the PCs of e.g. the long ladder being pretty rickety, he doesn’t know what’s down there. Indeed, the exploration of the salt pit, in spite of a lack of constant threats, or perhaps because of it, is a rather compelling affair: The little complex is pretty vertical, sports nice little dressings and details (horseshoes above a salt-rich tunnel, for example), and the use of terrain also deserves being mentioned: The threat slowly builds up to the inevitable confrontation with the troglodyte, made challenging and potentially deadly by the environment. Surprisingly well-made mini-adventure.

The adventure-sketch I mentioned has higher stakes and is grounded in a bit of real-world myth-weaving, but can easily be adjusted to instead pertain to a fantasy world: The ghoul house in rural Pennsylvania, where a nasty man named Mandris Hollen used his black arts to ascend to lichdom: He planted trees to channel ley lines, used them for his good…and the transients that came through, courtesy of the great depression, dug, unwittingly, not only holes for the trees, but also their own graves, awaiting his awakening as an army of ghouls beneath the surface. Really cool set-up, made creepier by b/w-photography of the creepy place and its surroundings. Reminded me in a good way of how the German CoC-supplements generate atmosphere.

The third major section of the book provides a total of 20 encounters while traveling. It is here, that the old-school Greyhawk-ish feeling suffuses the pdf the most: We can find greedy tax collectors traveling under the guise of a false identity; “Blacken[sic!] carcasses of large spiders”, ruined huts, an axebeak (the header for this encounter is the one slightly raunchy pun – “One Big Pecker”), a Halfling transformed into an orc (henchman material!), a sentient door in the middle of nowhere that can lead to some other place (a concept I myself am using – in my game, there is the Desolation of Doors, a pocket-plane-hub, where dreams are the currency to unlock new doors, but that as an aside…), gold diggers in a creek bed, a half-buried chest smeared with mandragora seeds and green sap…and there would be a lady who offers to cook for the PCs on a PWYW-basis. Oh, here’s the thing: She’s actually NOT a witch. Or hag. Or polymorphed monster. Just a friendly lady who loves cooking. I enjoyed these roadside encounters. They feel classic and provide a nice blend of combat and roleplaying, of the mundane and weird, of the threatening and benign.

Finally, we take a look at a Street Vendor, represented by a b/w-artwork, namely one Oren. Oren is a cobbler haunted by a dark past: At one point, he killed a woman in a fit of rage and was sentenced. While he managed to break out of prison, the life of an outlaw seemed to be his fate, until he met Laura, who not only became his wife, she also mellowed out Oren. His fits of anxiety and paranoia only rarely resurface, and he knows his trade. His business associate, Gerald the hunter, is also rather capable and loyal. 3 cool adventure hooks center around this constellation: One that sees the PCs hunting bugbears for Oren; one that has the (justifiably?) paranoid Oren caught by the PCs as he’s trying to hide a knocked out (or killed) watchman and one that centers on Gerald, who ostensibly slew a rare albino deer of the local lord – which brings legit bounty hunters right to Oren’s doorstep…

Editing and formatting are pretty good, if not perfect. I noticed a few glitches, but nothing glaring. Layout adheres to a printer-friendly one-column b/w-standard. The artworks and photographs in the pdf are really nice, particularly for the price-point, and sport the classic look the zine is going for. The electronic version does not sport any bookmarks, which represents and unnecessary comfort-detriment.

The first issue of Manor by Tim Shorts (shout out to Tenkar; found out about this e-zine there!) is something I frankly enjoyed more than I thought I would. It’s pretty difficult to get the classic, non-weird old-school vibe done right; there is a very thin line between being classic and being just redundant and boring. The mini-adventure’s racking up the tension, the diverse encounter and nice NPC-centric hook-set-ups all manage to evoke this sense of care, of passion, of the right aesthetics. The small details, the small hooks, are ultimately what makes this e-zine work. Now, I would have loved to see a player-friendly version of the sketch-like map, preferably with scale. Similarly, editing could be a bit tighter…but for the low and fair asking price, this humble installment most certainly delivered more than I expected. This is very much worth getting if you like old-school design-aesthetics. Fans of the weird will probably be less satisfied, but there are some nice angles here as well. Ultimately, my final verdict will hence clock in at 4 stars.

You can get this nice, inexpensive e-zine here on OBS!