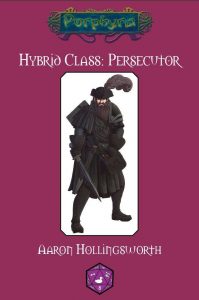 This hybrid class clocks in at 14 pages, 1 page front cover, 1 page editorial, 2 pages fo SRD, leaving us with 10 pages of content, so let’s take a look!

The persecutor is a hybrid of alchemist and ranger and gets d8 HD, 6 + Int skills per level, ¾ BAB-progression, good Fort- and Ref-saves, proficiency with simple and martial weapons, light and medium armor, as well as shields, excluding tower shields. The persecutor gains basically the alchemist’s alchemy ability, gaining access to extracts of up to 6th level, which is governed by Intelligence.

A persecutor begins play with darkvision 60 ft. (or +30 ft., if he already has darkvision), and adds his Intelligence bonus as an insight bonus to Will-saves versus spells and SPs from the illusion school. A persecutor also gains mutagen, and may select Extra Discovery as though he had the discovery class feature, but only for the purpose of selecting discoveries that augment mutagen or extracts. The persecutor also begins play with Track, gaining +1/2 class level to Survival checks made to follow tracks.

Instead of bombs, the persecutor gains the supernatural Signs ability. Making a sign requires one free hand and does not provoke AoOs. A persecutor may use signs class level + Intelligence modifier times per day. A sign generates a 15 ft.-cone that inflicts 1d4 fire damage “per 2 persecutor levels” – which isn’t per se correct. The wording here is slightly wonky, for signs inflict damage at 1st level and increase this at 3rd level by +1d4, plus another 1d4 at 5th level and every odd level thereafter. Alternatively, the persecutor may shape the sign as a 20 ft.-line “as a non-action” – that isn’t really how this is phrased in PFRPG, but it conveys the meaning, at least. The Reflex save to halve sign damage is 10 +1/2 class level + Int-mod.

Starting at 2nd level, the persecutor treats his class level as his BAB for the purpose of qualifying for feats. Additionally, the class gets a so-called discipline at this level, with another one gained at every even level thereafter. These disciplines basically cover what you’d expect from discovery-bomb modification: Acid, bludgeoning, piercing, slashing or cold damage, bane (sporting an (i)-relic in a botched italicization), changing damage at 10th level optionally to sonic or force…It’s a bit weird that force is considered to be as potent as sonic here, but that is really design-aesthetics. Combat feats gained by mutagens, poison use and resistance, quarry at 12th level and quicker weapons witching can be found.

Ranger combat style feats may also be gained this way, and no, you can’t select more and you can’t cheese the level-prerequisites. The explosive bolt discipline, unlocked at 4th level for the taking, is potentially brutal: You can add a sign to a bullet/bolt/arrow – if you hit the target, the sign triggers, sans save. There are a couple of issues here. 1) Do you have control of the direction of the sign effect? 2) When the missile misses, the sign does not trigger, so can the infused ammo be collected again? 3) On a miss, does that expend a sign use? 4) Does the infusion of a sign have a duration? I *assume* no, but RAW, you could infuse a ton of arrows and stockpile them. There is another issue: The firing of the infused bullet does include loading e.g. a firearm, which can be a bit messy. Favored terrain is also a discipline… There is also one discipline that nets you a pool of free action healing while under the effects of a mutagen. You may have noticed that, but the internal balance of these is not necessarily perfect – there are some significantly more potent options.

3rd level nets Endurance and swift alchemy. At 4th level, the persecutor gains a special medallion, which nets constant detect magic as well as +3 to initiative, which increases by a further +1 at 8th, 12th and 18th level. This medallion occupies the neck slot. 7th level nets woodland stride, 8th level swift tracker and 9th level evasion. 12th level lets the persecutor apply his Intelligence modifier to Will-saves versus all spells and SPs…which generates a bit of a weird situation: At 1st level, it’s the *BONUS* that applies to saves versus illusions; here, it’s the *MODIFIER* – there is an important difference here: A modifier may be negative. 15th level nets persistent mutagen, 16th level improved evasion and 20th level provides constant arcane sight and echolocation plus 2 disciplines.

There are 3 feats included: +1 discipline, +2 signs uses and 1/day tongues as an SP, +1/day per 2 class levels. We get a MASSIVE favored class option-list for several of the Porphyran races and while there is some overlap between them, as a whole, they are decent.

The pdf comes with a cool bonus-pdf that contains a new monster penned by Mark Gedak and Perry Fehr, the CR 4 emissary of the starfallen, a distorted, Large replica of a wasp, suffused with electricity. The critter is really cool!

Conclusion:
Editing and formatting are okay: There are a couple of obvious formatting glitches that imho should have been caught. On a rules-language level, we have a couple of issues, though, for the most part, no game-breakers. Internal balancing could be a bit tighter. Layout adheres to Purple Duck Games’ 1-column standard with purple highlights. The artworks on the covers of the regular and bonus pdf both are nice. The pdf comes fully bookmarked for your convenience.

So, in case alchemy and signs weren’t an indication, let me spell it out for you: This fellow basically is a The Witcher-class sans bombs; Aaron Hollingsworth’s persecutor thus takes one of my favorite concepts, bar none, and makes it a class…that unfortunately falls short of what it could have easily been. Instead of making the signs an interesting, additional tool in the character’s arsenal, it just is a tweak of bombs; the balance of sign and ranger-based options is a bit strange, the distinct options fall short of generating truly distinct playing experience.

And, you know, this could have been so much cooler: Picture this: Bombs added, distinct signs added and a talent-based, unique self-buffing engine; now, make all these resources tied to toxicity, analogue to the witcher games: You could generate a truly unique and captivating engine that plays radically different than the parent classes. As written, the persecutor doesn’t really manage to really differentiate itself sufficiently from its parents. The class, while flawed, remains functional, though; the bonus critter is nice and if you have less demanding standards than I do for classes, then this guy may provide some fun for you. Hence, my final verdict will clock in at 3 stars.