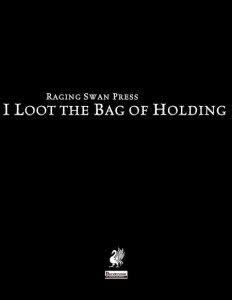 We begin this pdf with a massive table of no less than 100 pieces of adventuring gear – and, in case you’re wondering, they very much may be system-neutral and less crunchy that you could expect – but they *are* cool and diverse: A folding ladder, sticks that obscure the immediate area in purple smoke, camouflage nets for other biomes, differently colored sticks of chalk, dented breastplates – from the curious to the mundane, the table sports a solid diversity.

The second table herein sports 5o entries for artworks found in the bags of holding – and here, one can see the creativity of Mike Welham fully at work: A rendition of a treasure hoard that spits out one coin per day is, for example, just glorious: Think about it for a second – how does that influence local economy? Where do the coins come from, if they’re not generated from scratch? Are they permanent or a type of fool’s gold? A lot of potential here! What about bronze fish statuettes that swim in the water? Replica windmills that can be used to crush walnuts? This table is glorious.

The 3rd table herein, once again 50 entries long, features some rather unique books – whether it’s “On the Safe Rearing of Basilisks”, “Brain Surgery for Dragons” or “Planets in Alignment”, a book pertaining to constellations that are soon about to come to pass, the pdf’s books can be considered to be intriguing, fun and, more importantly, either elicit grins, provide hints or even adventure hooks.

Among the 50 esoteric objects in this pdf, one can find badger skeletons (including a scroll to reanimate the skeleton!), a ballista on wheels labeled “Cats only!”, crystal ewers that can only be filled with rain water, doll heads missing eyes – this table similarly provides some evocative and foreboding visuals to enhance atmosphere in various ways.

Editing and formatting are top-notch, I noticed no glitches. Layout adheres to Raging Swan Press’ elegant two-column b/w-standard and the pdf comes fully bookmarked for your convenience. The pdf also comes in two versions, one optimized for the printer and one for screen-use. Nice!

Mike Welham has taken a rather hard task here – unlike as usual, there is precious few common ground to tread regarding the contents of bags of holding; there is no thematic red line to trod upon and thus, on a downside, the tables do feel a bit all over the place. That’s also a strength of this pdf, though: With no significant restrictions imposed on creativity by themes, there are some truly delightfully creative hooks disguised as simple table entries here, with quite a few of them being simply inspiring.

As a whole, I felt that this was an inspired read, yes; but some of the items found herein do seem to me like they could have used some prices or at least minor magical rules/functions – at least for the PFRPG-version, which is btw. pretty identical to the system-neutral version. Granted, that’s a staple for the series, but especially when considering items found in an iconic magic item, a bit of magic, a bit of treasure aspect, wouldn’t have hurt this. Now, please bear in mind that I’m complaining at a VERY high level here – this is still an excellent buy and a great addition to the series. But from items found in a bag of holding, I would have expected a bit more meat. That whip fashioned from a squid’s tentacle? Why not at least make it masterwork? Oh well, this still is, as mentioned, a great book, though one I prefer to see as a system-neutral book. As for my final verdict – the system-neutral version gets the full 5 stars + seal of approval. The PFRPG-version loses the seal due to the aforementioned complaints. In both iterations, this is a neat addition to the series, though.

You can get this cool dressing-file here on OBS!

Prefer the yellow, system-neutral trade-dress? That one can be found here!

You can support Raging Swan Press directly and get a subscription here on patreon!