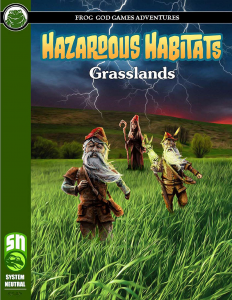 The second installment of the Hazardous Habitats-series clocks in at 47 pages, 1 page front cover, 1 page editorial, 1 page ToC,1 page advertisement, leaving us with 43 pages of content, so let’s take a look!

So, why did I denote this as system agnostic, rather than system neutral? While the vast majority of content herein can be applied and used in pretty much any roleplaying game system, there is a baseline of 5e-aesthetics underlying this, with saving throw references e.g. being based on ability scores.

Structurally, this is very much akin to the first Hazardous Habitats installment, only that this time around, we take a look and expand the information that was first presented in the phenomenal Fields of Blood hardcover in the Perilous Vistas series. That book was one of my favorites ever…know why?

How many modules do you know that make good use of plains, of the steppes? Mountains, swamps, deserts, etc.? Sure. But steppes? They are very often overlooked, and this book puts them front and center.

The basic paradigm is the same as before, as is the assumption that gamers are not simply consumers, that we *want* to know about a variety of topics. If there is anything I bemoan about the advent of d20-based systems, it’s that many books started to assume that only combat-relevant material needs to be featured. Compare e.g. 3.X’s Sandstorm book with Wilderness Survival Guide, and you know what I mean.

The book kicks off with a general discussion of grasslands – including the discussion how they come to be, their importance for the advent of civilization/agriculture, and how bodies of water, aquifiers, water holes etc. enter the fray. The tie to the direct application of this information to the realities at the table is maintained here – so no, this is not just dry information.

The book then proceeds to distinguish between types of grassland, starting with tropical grasslands like the savannah, providing information on vegetation by type and season, as well as a d20-table of random events. Demographics effects generators are provided, including their effects on attitudes and the respective effects on the way in which the locals will treat others. Political systems and lifestyles are covered alongside a table of adventure ideas and adventuring sites, allowing you to quickly and painlessly sketch cultures featured in the biome.

This same approach is also extended to temperate grasslands, though these do differentiate between steppes and prairies, with distinct tables for either, extending this differentiation also to the events, demographics, etc. – so yeah, different tables for determining steppe or prairie political systems by demographics, etc. As a general notion, living in the steppe sports a lower chance of e.g. having a sedentary lifestyle. Adventuring ideas and sites are also provided for both types of temperate grasslands.

The travel aspect is particularly interesting, at least to me, this time around: Trail blazing and travel on untrodden, virgin land is covered, making the whole section exude a palpable sense of pioneer spirit. Horses and more exotic mounts, as well as travel by water, are covered here as well.

As in the first book, we also receive a pretty extensive array of hazards codified in a mostly system agnostic manner, with notes on identification, avoidance, danger level, means of escaping, dimensions, and the like codified. These also note suggested damage types and conditions, and come with potential complications and means to remedy them. No concrete DCs are provided due to the system agnostic nature of the book, which is a minor downside. I’d have loved to see properly-codified rules for a variety of systems, but that may just be me. Diversity-wise, the hazards range from grassland fires to black blizzards; dust pneumonia is noted, and so are sinkholes.

Plants as poisons are particularly interesting here: With Johnson Grass, poison ivy, ragweed and the like offering some neat ones. As a minor nitpick: It’d have been nice to see non-rolling based cures (use plant/treatment xyz) – “Successful Easy Constitution-based saving throw immediately after taking damage” is less interesting in such a context to me than “Armor and heavy clothing mitigate damage.” In short: For a system agnostic book, focusing on ROLEplaying in all of them, not just in a few, would have been the better call. This also extends to insects: generators are provided for ticks and mosquitoes and the respective vermin come with lists of diseases – which is cool. Again, I’d have loved learning about their actual symptoms here, but that may be me. Stampedes and predatory animals are noted alongside various snakes – the snake mini-generator here is once more pretty neat, as is the little variety of different poisons – but here, the limits of the system agnostic approach become very obvious. When the black mamba poison lists:

“Increase Effects to Deadly and the Cure/Remedy to two consecutive Hard Constitution-based saving throws. Add Strength to the Damage Type and suffocation to the Complication listing.“

That may be a valid basic idea, but I’d have loved to hear how it actually FEELS, how the symptoms are, and perhaps a suggestion for some sort of remedy that is not magic-based. The book proceeds to provide a full list of neat random encounter ideas, and then proceeds to the weather section.

Here, we have tornados, microbursts and being struck by lightning, before we get the massive daily weather generators that let you determine daily low and high temperatures, chances of precipitation, wind speed (in miles per hour – oddly, the tables list “Wind Speed1” in the header– probably a glitch). As before, if you’re not a person born into imperial measurements, these tables with require some work. While all the years of roleplaying ensured that I have an easy time picturing feet, I have a hard time grasping miles, let alone miles per hour; and degrees Fahrenheit make absolutely zero sense to me. Getting kmh and degree Celsius values would have been really nice for the international (or scientifically-minded) audience. Just saying.

Editing and formatting on a formal level are good – there are a few cosmetic glitches, but nothing serious. On a rules-language level, the book handles its system agnostic approach in a solid manner, even though the lack of a system does mean that components of this book require more work to get the most out of, than if it had chosen to adhere to a system. Moreover, the important aspect of traveling speeds in particular, which are pretty important for grasslands, are, due to the system agnostic nature, absent, which is a bit of a bummer. Layout adheres to a two-column full-color standard, with solid stock art and public domain photography with filters – at least some artworks look like that to me. The pdf comes with bookmarks for your convenience, making navigation pretty painless.

I adore grasslands as an adventuring locale, and Tom Knauss’ carefully-researched supplement does unlock this cool terrain as a proper adventuring environment, not just as a transitory segment en route to the really dangerous places. In many ways, this is one of my favorites in the series – but perhaps because of this, I also found myself more disappointed by this than by the desert book, and it took me some time to realize why. Grasslands are very dynamic: The vast width of the biome, its openness (familiar to many of my US reader; less so for most Europeans – when I first visited the US, the sheer open horizon really blew my mind…) are an important factor – and so is travel, scale. Trailblazing and the pioneer spirit that so suffuses these plains, the awe of the vastness of the savannah, is more strongly tied to scope and scale than in other biomes; as such, the loss of travel speed tables due to the system agnostic nature of the supplement hurt it more for me as a person than it should have.

In contrast to e.g. deserts or mountains, the insects and plants become more important, and the system agnostic hazard engine works better for weather hazards than for those; the diseases and poisons in particular are aspects that are traditionally provided in stats. In their absence, it would have probably been prudent to provide information than is more ROLEplaying-centric, rather than the system agnostic take. This is particularly evident since a few hazards show glimpses of such approaches, which I’d have loved to see expanded further.

The importance of these in relation to the biomes in general makes this book still an excellent resource for changing your ways of thinking regarding grasslands, but it’s also a book that, for me, never attained the greatness that it so deserves. As such, my final verdict will clock in at 4.5 stars, rounded down.