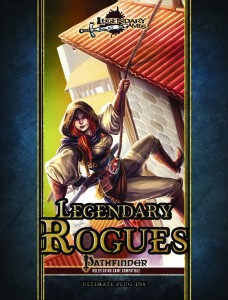 The second of Legendary Games class-centric Ultimate-plug-ins clocks in at 48 pages, 1 page front cover, 1 page inside of front cover, 2 pages of editorial, 1 page ToC, 2 pages of introductions (with a comical CCP-glitch, reading “What you will find in Legendary Paladins…”), 1 page SRD, 4 pages of advertisement, 1 page inside of back cover, 1 page back cover, leaving us with 34 pages of raw content, so let’s take a look, shall we?

So, what is the first thing you think of when the term “rogue” is thrown around regarding the core competences of the class? If you’ve dealt with any amount of optimization, that will probably be “skills.” Let’s face it, as written, the rogue class is pretty much an underpowered mess that has been nerfed down from even its 3.X roots to the point where it almost hurts – me particularly. You know, I *REALLY* like rogues and so do my players…concept-wise, that is. But until the advent of Drop Dead Studios’ Rogue Glory book, nary a player wanted to play the class…because, let’s face it, it’s one of the weakest classes for PFRPG in terms of combat utility. Now our rogues still were awesome characters, but I did feel that they lost their central competence along the way – being the suave agents, the acrobatic masters, the thieves and scoundrels, the brokers. This pdf acknowledges, thankfully, that the rogue chassis and some of its design-assumptions are in dire need of an overhaul to be competitive and allow the player to efficiently play the character they want to play.

The first selection of abilities, then, would be an assortment of skill specialties – basically alternatives to the trapfinding class feature that have comparable usefulness: Beyond a basic skill bonus, these allow e.g. expert acrobats to fall less when failing; Stealth specialists increase miss-chances. Specialization in information brokering can yield knowledge on whether an information is reliable as well as rerolls. Investigation specialists gain Perception and Sense Motive-bonuses and may see past illusions and Escape Artist-specialists may make creatures actually waste their AoOs. I wholeheartedly endorse the array of diverse options featured in this section – the additional benefits are plentiful and intriguing and I can see my characters taking any of them.

But what about the unchained rogue? Well, guess what? The book provides full synergy with the unchained rogue and codifies these skill specialties also according to the framework of said class, even going so far as to provide a skill unlock/signature skill-rework of the rogues in question when used in conjunction with this system. Kudos for going the extra mile!

The next customization option provided herein basically takes trap sense and makes it just as versatile and player-agenda-driven as you’d want it to be: Basically, you can e.g. get better AC when fighting defensively or against ranged attacks: The bonus stacks with itself and allows for a rogue to e.g. specialize in one such avoidance…or get multiple ones at lesser bonuses. Instead of Trap Sense+3, you can e.g. get a +1 bonus to ranged attacks and +2 to saves versus fear and mid-influencing effects. This takes a boring, static ability and makes players choose – which is awesome…and yes, the upgrade regarding danger sense in the Unchained version is covered as well.

The next type of ability codified herein would be instincts – these are the powerful, instinctual evasion effects that render the rogue powerful in a defensive manner. The pdf codifies evasion, uncanny dodge, improved uncanny dodge and 10th level improved evasion as instincts – thus, gaining these is codified as happening at 2nd level, 4th and every 4 levels thereafter – and yes, there are means to use immediate actions for 5-foot steps, proper acting in surprise rounds and multiple initiative-rolls, helping the general power-level of particularly high-level rogues.

Now obviously, rogue talents are an odd bunch: PFRPG began with the general assumption of a talent being equivalent to about 1/2 a feat, an assumption that didn’t even work with all rogue talents back then. With classes like alchemists and ninjas out there, it should come as no surprise that something odd is happening here: Unlike other comparable class features, rogue talents only sport a general 2-step distinction between power-levels. Hence, this pdf provides almost 100 rogue talents, including a significant array of rather well-conceived level-prereqs that allow for a more synergistic scaling. The truly interesting component here, though, pertains the feasibility of quite a few talents: Both regarding rerolls and fast stealth, which pales even before the sucky Skill Focus (Stealth) at 10th level – the authors actually did the math here and recodified former trap options into a more powerful variant. The care that obviously went into these is truly interesting and extends to power-comparisons between e.g. rogue talents and alchemist discoveries, bridging the gap between the two. Obviously, I can’t cover all of the talents…but know this: I consider them basically canon at this point.

There also is a new codification of talents that focus on last second saves for the rogues called desperation talents – from defensive roll to 1/day (+1/day at 15th and 20th level) negating attacks that would bring the rogue below 0 Hp with movement to gaining temporary hit points to avoid dying – and yes, all of these talents now can be found in a nice, big table. Once again, implementation for both core rogues and unchained rogues is covered rather well.

The fixing of the rogue goes even further – with saving throw-fixes (below that of specialists, but better than e.g. wizards) and the pdf also offers an ability to fix the BAB-discrepancy versus e.g. slayer…and also sports an optional alternate rule for attacks versus flanked targets, should you wish for a less distinct solution. Better yet: The damage-consistency and supreme array of sneak immune/negating creatures is also addressed via a plethora of different class features -and yes, this also includes a mechanically feasible take on streamlining the damage-output of APG and PFU’s Powerful and Deadly Sneak – coincidentally a mathematical discrepancy I noted in my own designs…so kudos indeed! The issue of sneak attack and critical damage is also, just fyi, taken care of in a concise and mathematically relevant, yet conservative manner that should not unbalance any game…and yes, nonlethal sneak FINALLY is no longer restricted.

Know how high level rogues in fiction tend to favor singular, deadly attacks and hit and run tactics? Well, the mid-to-high-level attack option of focused sneak attacks actually makes agile movement and skirmishing tactics more relevant for the rogue, allowing the class to contribute without full-attack-blow-trading. What if a rogue can’t sneak? Well, then telling blows, a 3rd level ability might offer what you want: Basically, they are short-range debuff attacks.

If all of that seemed too much for you – fret not: The Legendary Rogue class featured herein is just what you’ve been looking for. Nice to see the concise summary alongside the cherry-pick option…and yes, a significant plethora of short-mechanic centric archetypes that have been rebalanced or retooled are in here as well – from Acrobat to Poisoner to Trapsmith, this book delivers – and the same can be said about the two pages of new feats herein.

Finally, the pdf closes with the 10-level Master Thief PrC – at d8, 8+Int skills, 1/2 Fort-save progression (slightly odd) and 3/4 BAB-progression, we finally have a representation of Thief’s Garrett here – casing a joint, combining steal with trip, fast withdraws, downtime-synergy (and kingdom building…) as well as true avoidance of magic, grapples and the like, this damn cool little PrC absolutely ROCKS – it’s an iconic concept, well-implemented in a concise and feasible manner.

Editing and formatting, for the most part of this pdf, are top-notch, I noticed no rules-relevant glitches. Layout adheres to legendary Games’ two-column full-color standard and the pdf comes fully bookmarked for your convenience. The original artworks provided herein are high-quality and nice.

Matt Goodall and Jason Nelson’s Legendary Rogue, at first glance, looked like it was too good to be true; and since most books like this are just that, I went on to test the living hell out of this book. Okay, let me make this abundantly clear: No matter the power-level of your campaign, no matter how much you may like the Unchained Rogue, the Glory Rogue or the like – YOU NEED THIS. I didn’t realize how much I needed this book until I actually read it. Beyond taking care and fixing several trap options and retaining their feasibility over the levels, beyond a power-upgrade that was sorely required, the legendary rogue as presented herein is still as rogue-y as it can be – and so much more!

The rogue-class’ radical redesign herein puts player-agenda at the very highest priority slot and, at the same time, actually manages to retain a sense of cohesion that still allows for the implementation of other 3pp-material within its framework. Additionally, this book cleans up the design-aesthetic and power-level mess that unfortunately took hold of the rogue class and makes the class competitive without losing its soul.

Let me state this loudly and clearly: The Legendary Rogue is the class the Unchained Rogue should imho have been. It is now my default rogue class, particularly since it cleaned up those annoying trap options, ability discrepancies etc. – this is a labor of love, where, with a fine-toothed comb and deliberate care, mechanics were streamlined to actually play better with PFRPG’s official other classes. Oh, and if you dislike any component of this book, its supreme versatility does allow you to cherry-pick your preferred option to customize the respective tricks. Now, and this is where the book goes the extra, second extra mile, it also does something only very few crunch books do: It explains its design-rationales in easy to grasp ways for the respective GMs and players perusing this book – so if a particular issue addressed is not one for you, you’ll have the pros and cons weighed and listed so you can decide for yourself. Modularity-wise, this is up there with Spheres of Power or the Martial Arts Guidebook in the ways in which its respective options can be used or discarded – and it may even surpass them.

This book, in short, provides the player-driven, versatile rogue I’ve always been wanting since the inception of 3.0, the class I always longed for, but never got. Legendary Rogue is, without any hyperbole, a truly astonishing, downright brilliant piece of work and will be the standard by which I henceforth measure class-fix-style pdfs. It is simply ridiculously good and a shining example of what a crunch can do; it thus receives 5 stars + seal of approval, nomination for my Top Ten of 2015 and the EZG Essential tag – if it also covered trap-rules and a fix for the Stealth-skill, it would completely replace my previously favorite rogue fix, Rogue Glory, completely; as it stands, Legendary Rogues is a true must-own book for anyone who likes playing rogues and felt that the class fell flat of what it should be able to do, for everyone who wants more customization, options, flair – this is for you and worth every cent of its asking price a hundredfold.

You can (and SHOULD) get this absolutely glorious book asap – either here on OBS or here on d20pfsrd.com’s shop!