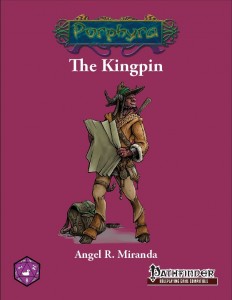 This class-supplement clocks in at 16 pages, 1 page front cover, 1 page editorial, 1 page of SRD, leaving us with 13 pages of content, so let’s take a look!

The kingpin base-class comes with d8, 8+Int skills per level, 3/4 BAB-progression, good Ref- and Will-saves and proficiency with simple and martial weapons as well as light and medium armor and shields, obviously excluding tower shields. 1st level kingpins receive kingpin’s cunning, a pool equal to his Intelligence modifier (minimum 1) and counting as grit/panache for the purpose of feat-prereqs and the like. The interesting and darn cool component here would lie in the regaining of cunning – not dependent on luck, at least exclusively – the kingpin receives two points back whenever he and his party avoid combat situations via smarts – be it via Diplomacy, Stealth or the like. He also receives 1 point back for stunts and good roleplaiyng, emphasizing brains over brawn – which is awesome. On the downside, rolling natural 20s, even on mundane skill-checks, also restores cunning, which begs for abuse and would ensure me going on a 2-paragraph-rant regarding the regaining of cunning thusly, but the pdf is smart enough to mitigate this abuse by including a GM-control-clause. Personally, I’d limit this to potentially lethal situations, but that’s just my playtesting experience – so far, no true complaints.

Where there’s a mechanic like grit or cunning, there obviously is a need to invest such an ability’s points for benefits and thus, it should come as no surprise that the class receives deeds, the most defining of them probably being gang, an extraordinary ability. For as long as the kingpin has at least 1 point of cunning in his pool, all allies within 20 ft. (scaling up to 70 over the 20 levels) receive a scaling morale bonus to skill checks. Allies must be aware of the kingpin, but do not need to see him and all terrain that does not block line of effect, corners and the like, talking etc. all are featured in this ability’s write-up – resulting in an ability that surprisingly, despite its complexity, works. Interesting here: Quite a few of abilities thus passively extend to the gang – basically, we get a bunch of always on buffs that scale, including being able to act in the surprise round, using skills untrained if the kingpin knows them and nasty flanking/teamwork tricks – and yes, collective Stealth and actually useful teamwork-feat dispersal is part of the deal.

Okay, where things become “ALERT LEVEL 11” is with the 7th level deed, coax self – the kingpin can take a standard action as an immediate action…which is pretty damn brutal. While the high minimum level means that dipping access doesn’t work and while the sidebar talks about spellcasting restriction and while the ability’s costs cannot be mitigated by any means – action economy-tricks tend to end up very strong. At 11th level, the kingpin can coax an ally as a standard action for 2 points of cunning, allowing said ally to take a standard action as an immediate action – the swift/immediate duality may prevent in cases like this that the ally can spam quickened spells, but the power of these abilities is still significant and warranted playtesting…more on that later. EDIT: Here either I misread something in my original review or read an old file; not sure. Thankfully, the problem was only a nitpick that did not influence the final verdict. Still, in the spirit of full disclosure of my botches, these lines acknowledging my oversight will remain.

Sharing skills, free charging through occupied squares and a true mastery of skills complete the array of deeds alongside double rolls on skills and the like. 1st, 5th and 13th level provide teamwork feats, 2nd, 9th and 17th bonus feats…and here, I should mention something: The kingpin also gets skill tricks at second level and every 2 levels thereafter, covering a diverse array, usually up to 2 per skill. When the bonus feats are used to take teamwork feats, the kingpin gets a bonus skill trick – nice way to reward the player for playing the character in the intent of its chassis.

The class comes with favored class options of a varied and diverse (and balanced) spectrum for the core races and a significant array of the cool races of Porphyra. The pdf also provides multiple archetypes for the kingpin, the first of which would be the Innovator, the magic item/crafter kingpin – who is, alas, very problematic: The archetype can utilize cunning to prevent the expenditure of charges or one-use-items like scrolls. While the archetype has a caveat for items beyond his power (which require a difficult skill check), the problem is that the easily recharged cunning cna be used to power basically a nigh-infinite source of healing and similar limited items, rendering the ability problematic in the long run regarding WBL-assumptions. Granted, this is not something that will break all campaigns and it can be handled…but it can result in some awkwardness. Other than that, I enjoyed this one.

The second archetype would be the Mascot, who utilizes Charisma for his cunning pool and receives the option to use comedy for distraction, generating a fascination-effect. The mascot also gets better defenses when unencumbered and not wearing armor and may, at higher levels, have allies reroll botched saves – pretty neat! The final archetype would be the Weisenheimer, who can similarly smart-aleck gullible fools with endless discussions of circular logic – though said ability should probably be language-based. At 7th level, these guys can utter dire mutterings that result in targets being “Scared” – which is not a proper condition. Panicked? Cowering? Frightened? What is it? Similarly, the fluff-wise cool rumor of doom, which sabotages efficient work requires a properly codified rules-repercussion to supplement its cool fluff and narrative potential. A cool archetype, but one that work only on a story-basis, which is a pity.

Editing and formatting are very good, both on a formal and a rules-level – though, among the archetypes, there is somewhat of a dip to be noticed from a previously top-notch presentation of the base class. The pdf adheres to Purple Duck Games’ printer-friendly two-column full-color standard and sports unobtrusive hyperlinks and comes fully bookmarked for your convenience.

The Kingpin was an honest surprise for me – I did not expect too much from a pdf from author Angel R. Miranda, never having had to review one before….though developer Carl Cramér certainly has had quite a lot of his works covered. Suffice to say, I am positively surprised – the kingpin can basically be summed up as a class that does exactly what its name implies – coordinate others, being smart. The rewards for cunning and the emphasis on rewarding smart roleplay over direct combat optimization are truly interesting and a design-paradigm I very much enjoy. Furthermore, the ease in which teamwork-feats etc. can be granted to allies and the always on buffs mean that this class works pretty well for new players or those who don’t want to read hundreds of books to make an efficient character. Finally, the significant array of last-second-save abilities for allies and the coaxing of options can make some frightening combos in the hands of smart players.

I said, I’d come back to that. Basically, coaxing actions set off ALL my alarm-bells in overdrive mode; Testing the class, their unmitigated costs (the second coax lack the no-reduction-caveat) actually render the class *drumroll* balanced in just about every context…as long as you bear one crucial thing in mind: Control those cunning points. If you do dish them out for natural 20s on skill-checks in every situation, these ones will be abused to hell; if you heed my advice and only sparingly use them…well, then, let’s make that clear, then the kingpin is pretty much an awesome, rewarding class.

So much so, that, were it not for the hiccups in the archetypes and aforementioned no-restriction-clause missing…I’d quite frankly slap 5 stars + seal of approval on this book, mainly because it captures pretty well the playing experience of a kingpin mastermind and does so with a bit of rules-innovation to boot…sans breaking the balance. In spite of its minor flaws, I will hence settle on a final verdict of 4 stars and a recommendation to check this out at the low asking price – good job, everyone!

You can get this interesting class here on OBS and here on d20pfsrd.com’s shop!