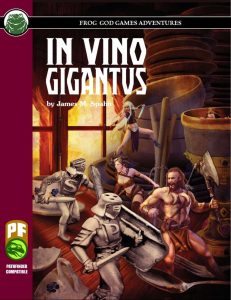 This review was requested as a prioritized review by my supporters. And yes, I know I should first finish the Quests of Doom-series, but I needed a palate cleanser from them, and this is the first Frog God Games-book where Michael “Mars” Russell was taken on board as a conversion expert to PFRPG.

The adventure is a low-level adventure, nominally intended for 4–6 characters of levels 1 – 3, though personally, I think that it works best for levels 1–2; at third level, most halfway decently-optimized PFRPG parties would curbstomp any opposition in this module. The PFRPG version uses NPC Codex material. The module features read-aloud text and does include a random encounter table that either has two entries cut, or the wrong die noted (the table mentions a d10, when it only has 8 entries), but that’s a minor nitpick. Regarding difficulty, the module is not exactly easy, but neither is it as much of a meatgrinder as the tougher Frog God Games modules; this can be bested without character deaths, and a well-composed party shouldn’t have too tough of a time. It’s no cakewalk either, though! The final fight in particular is designed to include the chance to die in a pretty epic way.

Length-wise, we have a pretty compact dungeon that can be run in a single session, two at most, and which would also work in a convention context. The map of the module notes its scale properly, but also represents a potentially weird logic bug I’ll talk about in the spoiler-section below. On the HUGE plus-side, the module actually does have a player-friendly map, and not one of those fake ones, but one that actually properly redacts secret doors! Huge kudos for that.

All right, only GMs around? Great! So, this adventure is very “D&D-y” in the way that it feels like it is steeped, lovingly, in the tropes of both modules and CRPG quests, for the party acts as essentially conscripted exterminators. The “where” is important, though: Summoned (literally) by the foppish storm giant Clovis Tempestas IV. To his Stormridge Sanctum, a fortress in the sky, the party is tasked with cleaning up his wine cellar. The young and rather decadent giant lets his henchmen provide a meal before banning the party to the wine cellar of the rather dilapidated and neglected sky castle in the clouds.

This premise takes the much-maligned “kill rats in cellar” trope, and proceeds to infuse some serious high fantasy into it; while the vermin-angle is well-represented by the random encounters (which focus on giant frogs, leeches, centipedes, etc.), and the dungeon that contains all the action would be the wine cellar. The cellar is partially flooded, adding an interesting terrain angle to the proceedings (difficult terrain on the floor), and there is some solid interactivity going on. While the module features lots of fights, it also has at least some stuff going on beyond that. Personally, I enjoyed that quite a few actions don’t necessarily require DCs, as quite a few adventure authors for PFRPG tend to focus too much on that.

The strange knights with holes on their heads? They’re btw. marble knights and the animated salt and pepper shakers, which I considered to be kind of hilarious. They also are a first boss fight of sorts, with solid defenses and hp, particularly for a level 1 party, but on the other hand, the party only has to contend with them if they do something foolish, namely going for the Sunday’s best.  So yeah, reap what you sow…

In the dungeon, the party can also find another party that the giant forgot about, and whether or not combat ensues is pretty much up to the party. If the players are smart, they take these fellows along, as the finale can become challenging indeed. Anyhow, this is a good place to note that information presentation isn’t always concise, and shows that the 5e-version was probably used as a template for conversion: we have e.g. “Treasure.” in one room, clearly denoting loot, while in another room, no such clear indicator is given. Personally, I’d very much would have been in favor of retaining that for all rooms. Beyond that, the aforementioned salt and pepper shaker knights have their extraordinary ability names both bolded and in italics, when PFRPG usually only bolds them, and the new critter has its ability also formatted thus, followed by a full stop instead of a colon, but that is cosmetic.

Risk and reward are tied together, and careful exploration can deliver some serious loot for a low-level party, and things that should have mechanical consequences do have that; jumping in the ash can might result in becoming briefly sickened, for example. Much to my enjoyment, the module also features the classic “contained mold freezer”, the dry storage uses brown mold, and beyond a wererat and giant spiders, the final encounter is particularly interesting: You see, Donner (Thunder in German, btw.), the thunder terrier (a new critter) and pet of Clovis, is caught by some giant spiders; the massive terrier is not dead or particularly injured, but frightened…and his bark is pretty damn lethal, particularly for a low level party. The build is neat with only a, even though the colors of the artwork and read-aloud text don’t match.

The goal here is to defeat the spiders, preferably without being killed by the lightning-infused bark of Donner; worse, the bark also causes random sections of the floor to fall away, which can send the characters falling to a horrible fate thousands of feet beneath the sky castle. It’s a cool set-up and calming the dog may be key to survival. There is but one issue with this set-up, and it is due to the premise of instability in the room: There is nothing keeping the party from retreating out of the rather cramped room, which is probably one of the smartest things they can do: Large creature (Donner) + 5 Medium spiders mean that most of the 12 squares are occupied by critters already, so pretty claustrophobic, and there’s a good chance to fall very far or be obliterated by the terrier’s bark, so playing smart? That’s a must here! But the claustrophobic nature of this battle does feel weird.

Which brings me to an issue I had with the entire dungeon: The grid is too small: I don’t get the whole “giant’s wine cellar” angle from the scale of the map; RAW, the storm giant can’t even walk into the cellar in his natural form, as the rooms and doors are scaled for Large creatures instead of Huge ones. I think I know how this happened: I assume that the original iteration had a larger grid, probably 10 x 10 ft., but PFRPG requires a 5 x 5 ft. grid to work smoothly, so the grid-reference was shrunk without increasing the number of squares. Where do I get that from? The TEXT still references 10 x 10 ft. grids, in a pretty glaring editing oversight.

Ideally, the number of squares should have probably increased to make the dungeon less claustrophobic. And no, the excuse that “the servants do it” falls apart when one looks at the very claustrophobic final fight. Ideally, I think the bark-collapse would be more interesting if that arena locked down after entering, with the barking being less deadly, but that may be me. (Cool, btw.: the module does take spider webs vs. falling into account.)

Editing is okay on a formal and good on a rules-language level, particularly in the latter discipline, the expertise of Mr. Russell shows; formatting sports a couple of hiccups and inconsistencies, but as a whole, works. Layout adheres to a full-color two-color standard with solid full-color artworks. The maps are full color as well, and as noted, the player-friendly map is a big plus. The pdf comes bookmarked for your convenience. I can’t comment on the merits of the print version, since I do not own it.

James M. Spahn is an adventure-writing veteran, and it shows here: This module takes an old cliché in RPGs and infuses some high-fantasy fun into it; the module is dangerous and interesting, requiring and rewarding player skill over good rolls; Michael “Mars” Russell delivers a significantly better conversion to PFRPG than what we’ve seen in the Quests of Doom-series, so that was neat to see.

The angle and dungeon per se are solid, and the ideas are neat, but ultimately, the scale-issue with the maps/set-up is a pretty significant detriment. I also couldn’t help but feel that the issue of the scale of the map is mirrored in what the dungeon doesn’t do: The whole angle of regular-sized characters in an environment designed for larger creatures could have been used to a much higher degree, and indeed, at least for PFRPG, I do have some recommendations: If you want to further scale the module’s size categories, Microsized Adventures is a perfect toolkit; for a level 3 party, more terrain hazards, such as via Ultimate Strongholds, would be a good call.

In the end, this is a good adventure; it’s not outstanding, but I do consider it to be worthwhile. If the scale aspect doesn’t faze you and you’ll just put a new grid on it anyway, then you should consider this to be a 4-stars module; with the aforementioned issue, though, this is only a 3.5-stars offering, and I have to rate what’s here. Ultimately, I do feel like this is closer to the 3-stars than the 4-stars verdict due to aforementioned gripes, hence I’ll round down.

While my review is based on the PFRPG-version, there are two more iterations:

The D&D 5e-version can be found here.

If you considered this review to be helpful, please consider leaving a direct donation via paypal, or joining my patreon. Thank you.