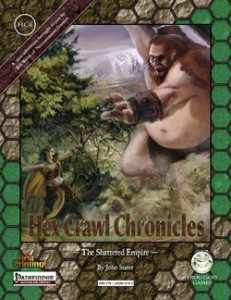 This being an adventure-sandbox, the following contains SPOILERS. Potential players may wish to jump to the conclusion.

When Emperor Brodred passed away, he did suspect that trouble would follow – but not the extent. His daughters, the princesses Petal, Peahen and Pearl started immediately quarreling. And now, the whole empire is falling into all-out anarchy – both lavishly-mapped pages of hex-crawling areas of the empire provided.  Hence, we also start the pdf with an overview of different units of soldiers – after all, three armies are ravaging the remnants of the empire, searching (so far) in vain for the Imperial Regalia hidden by the late emperor – for said items will decide who inherits the throne.

We also get rumors and more complications – for unfortunately for the players, one of the princesses has been more than dabbling in demonology, resulting in more than a few unpleasant interlopers from the lower planes scouring the country-side. Beyond the armies, PCs may also test their mettle against an incarnation of a thunder god for the favor of his nymph-mistress. Or what about awakening some legendary paladins from their slumber? Even beyond the raging war, deserters and chaos consuming these lands, there’s a lot to be done.

Editing and formatting are not up to Frog God Games usually excellent track-record – I noticed ambiguous names, male/female ambiguities and similar typos and more of them than usual for a product of this size. Layout adheres to a printer-friendly b/w-2-column standard and the original pieces of b/w-artworks are gorgeous indeed. The pdf comes fully bookmarked for your convenience.

Hex Crawl Classics, each one of them, essentially deliver enough content to carry potentially a whole campaign – and this one’s no difference. There is a lot of content in here, and while we don’t get full statblocks for every creature/character in here, we still get a lot of content – though apart from some rare cases, the respective NPCs get not an appropriate selection of gear – some of the higher level NPCs have pitifully few items at their disposal. Still, as a drag-and-drop to insert into e.g. a kingmaker campaign or simply as a backdrop, this is a treasure-trove of ideas that slightly suffers from the lack of player-friendly maps and aforementioned gripes. Still, at this length and for such a low price-point, this still is a nice offering and hence my final verdict will clock in at a solid 4 stars.

You can get this module in two versions:

For the Pathfinder-version, it is here on OBS and here on d20pfsrd.com’s shop.

For the old-school Swords & Wizardry version, click here for OBS and here for d20pfsrd.com’s shop.