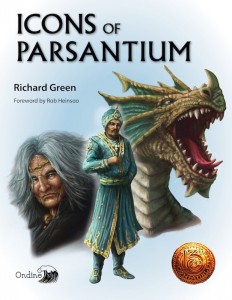 Richard Green’s Byzantine-analogue fantasy city of Parsantium is easily one of the most unique settings I’ve read all year: While mostly setting-agnostic, the city’s unique backdrop and flair rendered Parsantium a wonderful breath of fresh air among all too many redundant concepts. This year, I also saw a broadening of my focus, extending my reviews to covering 13th Age, among other systems, amid my portfolio.

If you’ve read my reviews of 13th Age core supplements, you may have noticed that I love the system and certain components of the Dragon Empire setting – but the icons are not one of the components I like. The default icons pretty much are archetypes in the traditional sense and only in recent supplements and some tidbits, the icons slowly are getting a kind of identity that transcends bland fantasy fare. If you’re planning on using 13th Age properly with a given campaign setting, you’ll need to determine unique icons for the setting – and this supplement does just that.

After a neat b/w-map of the surrounding country as well as foreword by none other than one of 13th Age’s creators, Rob Heinsoo, we immediately introduced to the respective icon-write-ups and their level of detail is significant: The write-ups sport a sample quote, notes on the usual location where the icon can be found, detailed common knowledge as well as advice for handling adventurers and their relationship with the icon. Champions and followers, allies and adversaries, enemies, the icon’s history – all covered…including “The True Danger” – so yes, everything you’d expect is here…and more.

The pdf also covers two racial write-ups for use as PCs: Gnolls and Vanara. Gnolls get +2 Con or Dex and a racial power that makes piling on foes more lethal. Vanara receive +2 Dex or Wis and get a racial power that allows them to disengage 1/battle as a free action – annoyingly called “pop free from an enemy” in the rules-language. *sigh*

Oh well, you’re here for the icons, right? So what are they? Well, first we’d have the Archbishop, His Radiance Arcadius, head of Helion’s church, a devout and pious scion of civilization who is as strong as his faith…rendering him susceptible to some nasty ploys, but also extremely powerful. The Basileus Corandias XVIII the Lionlooded would be the city’s sovereign, the emperor-analogue, if you will. Of course, the underworld has a similar ruler, The Boss of All Bosses, the informal fourth tribune of the city ultimately makes for a compelling character that diverges enough from the Prince of Shadows to be interesting. There also would be the Great Caliph Faisal al-Aqil: Scholar, astronomer and conqueror of Parsantium – which, if you’re not yet familiar with the city, should make one thing clear: The power-dynamics of Parsantium are much more unique, less monolithic and thus more rife for adventure than those of the default icons.

Parsantium, however, is also home to a Dragon, a bronze who, in times of need, has risen to defend the city – but for which ultimate agenda, no one knows as the dragon walks the streets well-disguised, while hunted by the agents of darkness. The Emperor of the Jade Throne further complicates the net of allegiances of the political landscape of the icons here – obviously an Eastern-inspired ruler who has significant interests in the city…and a dire feud versus the Gnoll Khan, for it is the gnolls that stand in for the nomadic, raiding hordes of the Mongols in real world history, being led by the Grand Khan of the Gnolls.

Arcanists obviously also are represented – here, by the Grand Master of the Blue Lotus, who not only is the foremost wizard of his massive esoteric order. In a twist on the classic trope, the vanara is actually a champion of the downtrodden and common people! Haven’t seen that one before – kudos! The Lady of Summer Kingdoms, as alluring as she is dangerous, would be obviously a Fey Queen – and one that may, with her capricious whims, bring e.g. the Archbishop to his kneed. The Maharani, a half-deity, rules over the analogue of India and her massive realms. Similarly, but in a more sinister way, the legendary mummy of Queen Merytnofru is gathering hordes to recreate her massive erstwhile kingdom.

The paladins of the Platinum Knights would be a force for order and civilization from the predations of the green-skins, adding an implicit angle of interesting prejudice to the mix. That’s not all, though: The dread Rajah of Rakshasas is also playing his game in the city and the Water Lords, elected rulers of Loranto, could be considered to be pseudo-Venetian schemers united in the goal of securing maritime supremacy…and then, there is, finally, the legendary witch of Flotsam – a mysterious crone, black market dealer…and apothecary.

Do you notice something? Even in my admittedly brief summaries of these icons, you’ll notice ambiguity: Even the more villainous icons have angels that make them appropriate for heroes…and vice versa. The collection of these icons inspires, provides the potential for not one, but a vast array of potential story-lines…and the book does not end there.

For your convenience, each icon sports positive and negative 5 + 6 entries for the icon’s respective relationship dice – and yes, these entries are intriguing and helpful indeed…and then there would be the handy glossary and the secret information provided, which contains some truly intriguing hooks to develop…and no, I’m not going to spoil them here.

Editing and formatting are top-notch, I noticed no significant glitches. Layout adheres to a printer-friendly 2-column b/w-standard. Interior art is a blending of the color art you see on the cover and b/w-artwork – it does its job, though I wished each icon had its own artwork. The pdf comes fully bookmarked for your convenience.

Richard Green’s Icons of Parsantium are absolutely STUNNING: They walk a tight line and manage to keep the balance…between what? Well, you see, if the icons diverged too much from 13th Age’s core icons, we would have an issue regarding adventure-conversion. If they remained too close to the default icons, they’d be unnecessary. Quite the contrary is the case, but let me elaborate: 13th Age, as presented in the core book-line, is pretty much a system with a certain intended playstyle that extends to the stories told: Full-blown, in your face high fantasy. The thing is, the system would support more playstyles, but the global scale and relatively one-dimensional icons of the base setting do not lend themselves particularly well to shades of gray moralities, politics or less global campaigns…which I always considered a pity.

Enter this book. Sure, you can consider and use the icons herein very much the same way as 13th Age’s default icons – but they have more depth and diversity to them: The icons herein are very much tangible; they are characters with names, histories etc….and yes, they may die and fail and struggle. What we have here are proper characters with ambiguous, versatile uses…that lose none of the icon’s required gravitas. Even if you’re not interested in Parsantium (why?), I pretty much can guarantee that, if you’re even remotely interested in a more down-to-earth or sword and sorcery-esque version of 13th Age, the icons here will provide inspiration galore for your own designs…or make for great scavenging material. I have no significant gripes whatsoever I can field against this great book and indeed, will probably revisit Parsantium with 13th Age-rules, just to sue these icons more. My final verdict will clock in at 5 stars + seal of approval.

You can get this awesome supplement here on OBS!
Endzeitgeist out.