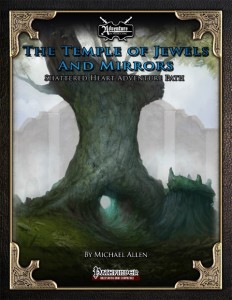 The second installment of Michael Allen’s saga about the fight over the soul of the halfling people of Piccolo clocks in at 48 pages, 1 page front cover, 1 page editorial, 1 page ToC, 2 pages of SRD, 1 page back cover, leaving us with 42 pages of content, so let’s take a look!

This being an adventure-review, the following contains SPOILERS. Potential players of this AP should jump to the conclusion.

All right, still here? After re-consecrating the subaqueous temple of the Goddess and potentially brokering a peace between the folk of Pembroke and the Vikmordere (or killing the intruders), there may be an angle for the repair of the next temple: Agents have reported to Carlyetta of some strange Cyclopean ruins (some of which the PCs may have seen in module #1) that may actually contain a weird type of glyph magic which may strengthen the bond of elemental magics with the Goddess. But in order to further research these runes, Caryetta’s (and the PC’s) next step on the journey is the dwarven enclave of Stoneroot – after all, it was the dwarves that did craft the alchemical mirrors that provided sunlight to the subterranean holy tree that is the goal of this module’s quest -and the PCs will need the information regarding the means by which this restoration can be achieved.

Thus, we begin this module with a social ROLEplaying-heavy sandboxing scenario wherein the PCs walk the streets of Stoneroot, dealing with backdealings, missing people and more – most importantly, though, capable investigation is required to make heads or tails of the different theories concerning the cyclopean ruins…and the decidedly smart manipulations of the PC’s shadowy adversary. Indeed, smart players will be required to notice the subtle clues that slowly accumulate – from enchantments to forged documents, there are some smart moves on behalf of the adversaries here -and for a reason. The runes, while clearly powerful, will prove to be dangerous indeed…but, in tune with the first module, we’re still talking about consequences and choices: Once again, the defining feature of the saga remains the means by which PCs shape the destiny of the very heart and soul of Piccolo’s halflings. Community points are gathered and lost and e.g. the choices on how to deal with disgruntled dwarves and the like remain important – particularly when strife is unleashed and the poor bosun of the Autumn Leaves becomes assimilated by a dread intellect devourer, further shaking Carlyetta and making her susceptible to the notion of requiring power – fast.

On the journey to the temple, with copious supplies and the like, the PCs will encounter truly lavishly-rendered new monsters: The Zagnatti, spawned from the insane mind of a fragmented god can be first encountered – from the empathic-shielding of blood pustules to the powerful queens, these somewhat mantis shrimp-like creatures rank among the most interesting insectoid adversaries I’ve seen in quite a while – oh, and each of their artworks just rocks and drives home their power: Think of Alien meets colorful mantis shrimps. And yes, once again, the PCs can save lives here…and gain even more support. (By the way – each of the respective encounters herein does have its own, neat full-color artwork!)

Now, the eponymous temple of jewels and mirrors is one of the most wondrous dungeons I’ve seen in quite a while – not only does the map of the dungeon look like a tree, it is ultimately a dungeon that is unique in that its rot has driven its guardian insane, while trolls and worse roam its place – the PC’s task, then, is not only to repair the mirrors used to funnel sunlight through the tunnels towards the tree, they also have to contend with the dungeon’s unique inhabitants, traps…and the sacred tree at the temple’s center itself, which lashes out against those foolish enough to step into its presence. The writing and imagery of this dungeon is downright awesome and sports a truly diverse array of challenges – and, once the PCs are victorious, the module is not yet done – the sanctification of the temple, with or without the runes, will be the crucial finale of the module and, once again, the PCs will reap what they have sown regarding trust, kindness and their own investigative prowess.

As with the first module, we get a community point tracker-sheet and player-friendly maps as well.

Editing and formatting are top-notch, I noticed no glitches. Layout adheres to a beautiful two-column full-color standard with copious amounts of gorgeous, original pieces of full-color artwork and AAW Games’ usual, high-quality cartography – and yes, player-friendly versions of all maps are part of the deal. The pdf is fully bookmarked and, like the predecessor module, I urge you to get the premium print version – it’s glorious and the module is well worth it.

Why? Well, Michael Allen delivers a more conservative module in its genre here – but at the same time, he does something right that almost all adventure-series, whether they be APs or adventure arcs, get wrong. What do I mean by this? Well, know how e.g. in the original RotRL, sin-tracking was deemed a thing…only to then not really matter? How some seemingly important consequences are glossed over in later books? This is pretty much the antithesis to this practice: From small side-character’s deaths to PC behavior, literally everything the PCs do, everything that happens, matters in some way – and the decisions and performance in module #1 carries over perfectly to this one, providing an incredibly concise narrative, a feeling of organic growth, also regarding the interactions with the NPCs…and, once again, there are several choices, several outcomes to the conundrums posed. That and the new monsters are awesome.

Shattered Heart #2 actually manages to maintain the incredibly high quality established by its predecessor and continues to captivate and astonish with fantastic vistas, the rewarding of smart player choices and nail-biting action – and, if this series manages to maintain this level of quality, we’ll have a truly astounding experience once it has been concluded. I remain with a final verdict of 5 stars + seal of approval + nomination as a candidate for the Top Ten of 2015 – if Michael Allen continues to deliver this level of quality, we’ll be looking at an author who’ll rank among my all-time favorites alongside illustrious names such as Richard Develyn, Matthew Finch, Bill Webb and similar titans of their craft.

Want to have it for Fantasy Grounds? You can get it here on OBS!

Do you currently prefer D&D 5e? You can get the adventure for 5e here on OBS!
Endzeitgeist out.