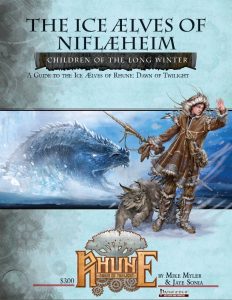 This racial pdf clocks in at 10 pages, 1 page front cover, 1 page preface/editorial, 1 page SRD, leaving us with 7 pages of content, so let’s take a look!

So, what is Niflæheim, the home of the ice ælves that so strongly shapes the whole race? Well, as the preface states, it is somewhere along the lines of Mad Max meeting 30 Days of Night – basically Antarctic survival in a fantastic context. It should come as no surprise then that the history of the ice ælves and their clades is written in blood and tragedy.

It is against said exceedingly harsh environment that these people have carved out their own niche to prosper even, as their shamans gather the power of heimilimarks, seeking to return to the fields of Midgard…but, alas, there is the doomsday, the leitmotif of Rhûne, also attached to the ice ælves, for Níðhöggroth (amazing from a linguistic point of view: Sounds like a more Black Metal version of Níðhöggr!), the wyrm of the long winter, is drawn inexorably towards them…

The prose of the race being outstanding, what about the mechanics? The ice ælves receives +2 Dex and Wis, -2 Cha, are native outsiders with darkvision and gain +2 to Perception, Survival and Stealth, +4 to Acrobatics when moving across slippery surfaces. They have cold resistance 5 and get elven immunities. They establish bounds with their heimilimarks, being immune to aging while within 5 miles of these as well as gaining at-will pass without trace in this area. They get snow stride and may, as a standard action, predict unerringly the weather in a given area for 24 hours. They are vulnerable to fire. The race comes with 3 alternate racial traits: +1 natural armor in exchange for elven immunities, 1/day ice armor and stone shield as SPs at the cost of weather prediction and elven immunities and finally, there are ælves that may subsist on a diet of snow alone, provided they eat 4 times the usual amount, but these also lose the forecast power.

As a whole, the race is pretty powerful, accounting for the increased power-level assumed by Rhûne. That being said, the power of the ice ælves is very much terrain bound: Unless your campaign exclusively happens in northern climes, the race will not prove to be unbalancing to even gritty games. In the frigid cold, though, they are very strong. The pdf provides a selection of favored class options that cover the advanced player’s guide classes as well as the magus – these generally are nice, though e.g. the bolded cleric-line is not red like the others – which would be as good a place as any to note that there are some deviations in formatting from the established racial presentation, including, unfortunately, the absence of an age, height & weight table in this pdf. That being said, these, for the most part, are cosmetic.

The pdf also provides four mundane items – the relatively powerful grafa staff (aka combat shovel) and the fire proofing magical waters of Niflæheim being two: The third would be icicle arrows, the fourth a sheathe that freezes the weapon, making it harder to draw…which sounds odd, but becomes pretty cool (haha) once used in conjunction with one of the new feats: Weaponize Snow lets you make a limited array of fleeting snow weapons that obviously can be kept in shape longer via these sheathes. Those with the Touch of Niflæheim gain 3 + Wis-mod ray of frost per day and may use these to further enhance snow weapons to inflict +1d6 cold damage. Fists like Ice net you stone fist 3+ Wis-mod times per day, while Snow Slinger does the same for magic stone. Sharp Chill adds a scaling enhancement bonus to weaponized snow weapons. Snow Strider works in conjunction with Run and lets you change directions multiple times.

The pdf also contains 5 different magic items: Iceflame Torches produce a heatless flame, powered by the body heat of the wielder (fans of Dark Souls etc. – there is some amazing imagery here: “His flame sputters and soon,. only embers will remain…”), while Herklæði Crystal Gorgets can generate breastplate-equivalents of ice armor – makes sense and is pretty amazing! The 3 last items would be the heimilimarks, which come with lesser and greater versions as well. The lesser version nets you fire resistance and a kind of shields, but also allows you to expend this shield’s absorption capabilities to provide SPs. The lesser iteration nets fire resistance, but provides ice SPs, which felt a bit odd to me, but if in doubt, I tend to assume intention rather than glitch. The regular version provides cold-based tricks. The greater version, obviously, have the most powerful SPs and, when holding it for long enough, you slowly start becoming an ice ælf.

Editing and formatting are the one weak point of this pdf: While significantly better than in the previous racial pdf on the jötunfolk, there are some hiccups that could have been avoided, even though they mainly are aesthetic. Layout is absolutely glorious: 2-column, full-color, gorgeous. The same can be said about the numerous full-color artworks herein: While two look a bit stock-art-y, the rest is on par with the amazing cover. The pdf has no bookmarks, which constitutes a minor comfort detriment.

I absolutely hate terrain races. The one thing I LOATHED about Sandstorm and Frostburn, two of my favorite 3.X books by WotC, was frankly the racial section. Why introduce cool terrain and then make races that ignore the rules, but suck in other contexts? Plus: Just slapping “terrain name” before a race or racial concept does not make for a cool race. The ice ælves of Niflæheim are pretty much anathema to this: Instead of getting an identity-less terrain-race, we are introduced to a harsh people steeped in their own mythology. The tricks of the trade of the race are amazing…and while they *are* a terrain race, I can’t find it in me to hate them. The prose woven by Jaye Sonia and Mike Myler is too captivating for that; The ideas are too cool. (Yeah, I’ll punch myself for that one later…) While the race is strong in the given climate, GMs that do not plan on exclusively playing in the depth of winter should have no issues using the ice ælves as presented here. It is only the minor hiccups like the missing age, height and weight table that truly keep this pdf from the highest accolades. As a whole, this can be considered to be a good book, well worth a final verdict of 4 stars.

You can get these neat ælves here on OBS!