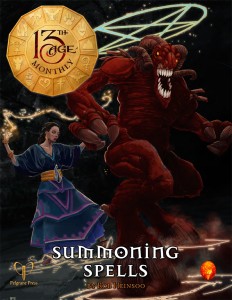 This installment of 13th Age Monthly clocks in at 13 pages, 1 page front cover, 1 page SRD/editorial, leaving us with 11 pages of content, so let’s take a look!

13 True Ways introduced summoning for two new classes – druid and necromancer, and now, we get rules for the core-classes as well – but can they stand up? Do they maintain balance? Let’s take a look! Summoning creatures is a standard action and they take their action immediately after the summoner in the initiative order. Summoned creatures fight until the end of the battle or until reduced to 0 hp – if they are defeated, you take psychic damage equal to the creature’s level. Creatures may be dismissed as a quick action. Unlike druid and summoner, the summoning options presented herein do not limit the character to one in effect at a given time – they do require the actions of the summoner to be fully effective, though. Integration of these rules is made more streamlined by a rather interesting idea: There are three types of summons -ordinary, superior and independent. Druids and necromancers summon superior creatures that have the regular array of actions.

Conversely, clerics and wizards using these rules summon ordinary creatures, unless otherwise noted. Ordinary summoned creatures only take a standard, move and quick action if a summoner used a standard action to control the creature on his/her own turn. If not controlled thus, you roll a d6 to determine the default action the creature takes, varying from creature to creature. Lesser summoned creatures thus can take a full turn when controlled directly – but when more are available, you have to decide which one to control. An exception to this would be the option to summon mook swarms – the whole mob is considered to be one creature for the purpose of being controlled. Summoned creatures also are not quite as real as the…well…real deal. As such, they lack some of the better tricks the “proper” creature could pull off and most commonly is represented by less hit points. Summoned creatures may use the escalation die, but can change its value only during the turn they are summoned – this rule rewards PCs not immediately spamming creature upon creature on the battle field. Summoned creatures also count as allies – which means that they may soak up random recoveries and the like – another reason not to have too many of them around all the time.

Summoned creatures also get no recoveries and heal only your level when subject to a healing spell based on recoveries and no, they do not get nastier specials. Personally, I am not a fan of the sloppy way in which the creatures are codified as spell or creature: Basically, the pdf says that they behave as spells when being cast, thereafter as creatures…unless the GM rules otherwise. More precise guidance would have been called for here.

The pdf begins with lantern archons (level 1, 3, 5, 7, 9 stats provided) and hound archons (lvl 5, 7, 9 stats provided) as summons for the cleric, with both coming with appropriate feats for all tiers – though personally, I don’t think the epic feat for the lantern archon is fitting – on a crit, it becomes a superior creature for the rest of the combat. How? Why? I don’t get the in-game logic behind this. And yes, the feat belittles you for taking it: “Surely there must be something better you can do with

an epic feat? No? Very well then:” – I kid you not, that’s what’s written here. I don’t get why the designers of 13th Age insist on such unprofessional conduct. Not often, but here it is again – it’s probably intended to be funny, but it comes across as arrogant and belittling. Thankfully, the other summons do not feature such a line. On the plus-side, I do like how certain feats reward having certain domains…though the relative scarcity of spells herein means that only some domains are covered.

Okay, as for wizards, there are two types of summoning, with the first being demon summoning? As the pdf aptly observes, the floating pentagram on the cover? That’s the archmage’s innovation and, like an ironic halo, it allows for at least rudimentary control of demons. Alas, it’s not fool-proof – on an attack versus MD that scores a natural 18+, the summoner must save or see the pentagram canceled for 1 round. Thankfully, dismissal/death is covered in detail here. On the downside, the formatting here is a bit cluttered and makes the rules-text continue right below the last statblock of hound-archons. Interesting: There is an eternally laughing type of demon that can be controlled more easily…but still…having an abyssal engine of destruction that continuously laughs can grate on your nerves…especially when you think the joke’s on you… The other and more reliable means of summoning would pertain to earth elementals, which are provided as an example (lvl 1, 3, 5, 7 and 9 covered) – so no, no sample water, air or fire elementals. 🙁

As for demons, we get the imp (lvl 3 and 5), frenzy demon (lvl 5 and 7) and aforementioned laughing demon (lvl 7 and 9) as summoned creatures…and the laughing demon as a non-summoned, standard creature – and their nastier special is joker-gas-level brutal. Psychic damage whenever you save. Including death saves. Yeah. Ouch.

Editing and formatting are very good – however, I do not understand the strange decision to clutter text together to the point, where one statblock and the text of another chapter almost visually blend together – that’s just odd. The pdf comes with nice full-color artworks and layout adheres to 13th Age’s 2-column full-color standard. The pdf has no bookmarks, when it’s one of the longer installments in the series and one more likely to see a lot of use – I don’t get why they’re absent from this installment.

Rob Heinsoo knows his system and it shows – mechanically, there is quite literally nothing to complain about here – the rules provided are concise and playtesting did show them to be pretty balanced – no necro or druid will complain about them stealing their thunder and the unreliable demon summoning in particular can be considered to be pretty awesome. At the same time, this feels like a band-aid pdf…for a bullet wound in the system. Summoning creatures pretty much is a staple of fantastic gaming and this pdf does manage to introduce this component into 13th Age for two classes that ought to have had it in the first place.

If you’re a sorceror, chaos mage or the occultist wishing to dabble into summoning – tough luck, you get nothing; No special rules, no unique tricks – nothing. That’s one gripe I have against this pdf. My second gripe would be that non-combat summoning, utility-summoning, if you will, isn’t covered well here – and the scope even within the classes and in combat, is too limited. Want fire elemental summons? Design them yourself.

Basically, we have the topic for a big book here, condensed down to its very basics. Sure, what’s here is solid – but the sheer amount of what isn’t here feels downright jarring. Relationship-effects on summons? Nope. Not even PCs in league with the Diabolist get some special tricks. Gold Wyrm/Priestess clerics and archons? Nope, no synergy. The domain-component is solid, sure, but the only thing this pdf accomplished in my group was to incite grumbling about the rules not supporting the character-concept my players wanted.

This is not a bad pdf and a capable GM willing to do a lot of work can use it to make A LOT of summoning spells and creatures, sure. But my point remains that this should have been a big, concise book or expansion. With the limited scope it has, we get a solid offering, but one that does not cover the topic at hand in sufficient depth. While personally, I was annoyed by the half-assed and belittling epic tier feat for lantern archons, you may disagree here, hence I will not take this into consideration for my final verdict – just a note: Belittling your audience and players may not be a smart move in the long run. I know that at least one of my players is really pissed and I am inclined to add my name to the list…

What remains, what’s here, is a solid pdf that manages to avoid balance-issues and the spam-syndrome associated with summoning in other systems. But also a pdf that leaves a lot to be desired, a long shot from a comprehensive array of summoning magic in 13th Age. My final verdict will clock in at 2.5 stars, rounded up to 3 for the purpose of this platform.