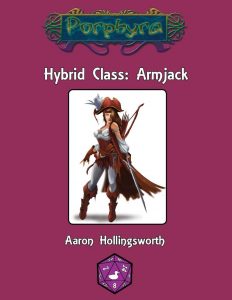 This hybrid class clocks in at 11 pages, 1 page front cover, 1 page editorial, 1 page SRD, leaving us with 8 pages of content, so let’s take a look!

The armjack hybrid class presented here represents a hybrid of bard and fighter that gets a d10 HD, 6 + Int-mod skills per level, proficiency with simple and martial weapons, all armors and shields, including tower shields. The armjack gets a full BAB-progression as well as good Ref- and Will-save progression.

The armjack is a hybrid of bard and fighter and thus begins play with cry to arms, a variant of bardic performance that is started as a standard action and then maintained as a free action, with 7th level and 13th level reducing the activation action to, optionally, a move action or swift action. Nice catch: the original activation action can still be used. 1st level can yield +1 to atk, +1 at 5th level and every 4 levels thereafter. 2nd level nets a bonus to Will-saves as an option (improving at 6th level and every 4 thereafter); 4th level features a 60 ft.-range +2 to damage that increases by +2 at 8th level and every 4 levels thereafter. 6th level can yield temporary hit points, 1 per HD of the affected creature. Nice: Has a cool down. Finally, 10th level allows for the ignoring of 5 DR (including, RAW, DR/epic), which increases to DR 10/-. The ability can be maintained for 3 + Cha-mod rounds, +2 rounds per level.

Additionally, the class begins play with judder strike, which allows for the free action addition of 1 sonic damage, +1 at 5th level and every 5 levels thereafter. 2nd level, alongside every 4 levels thereafter, nets you a combat feat and the armjack may substitute Charisma for Strength for the purpose of combat feat effects. For these feats, the armjack is also treated as a full-progression fighter. At 3rd level and every 4 levels thereafter, the armjack reduces the armor check penalty of armor worn and increases the max Dex-value of them. Unique: The armjack adds an armor’s AC bonus to saves versus language-dependent/sonic effects/deafening/etc. Like that! Starting at 7th level, the armjack may select an advanced armor training instead of the numerical increases the ability provides and the ability counts as armor training for prereq-purposes.

At 4th level, the armjack can Cha-mod rounds long gain a combat feat he meets the prerequisites for, +1 daily use for every 4 levels beyond 4th. At 5th level, the armjack selects a weapon group, gaining +1 to atk and damage with it, with every 4 levels thereafter adding another group and increasing the bonus of a previously gained group. The bonus damage thus gained is once again sonic and the armjack may, at 9th level, be replaced with instead an advanced weapon training option. 6th level provides a minor bonus to Diplomacy and Intimidate and lets the armjack ignore racial prerequisites in feats, courtesy of his outlandish ways, with 10th level providing proficiency with all exotic weapons. 12th level makes the armjack be treated as lawful, even though he isn’t, with DR 5/chaotic and benefits from axiomatic weaponry and spells etc included. Starting at 14th level, the Will-save bonus no longer consumes daily uses of cry to arms and at 16th level nets 1/day heroes’ feast as a SP. At 18th level, he may use cry to arms even when paralyzed, unconscious, etc. and 19th level nets immunity to sonic damage and the deafened condition while wearing armor and shield. As a capstone, he reduces any penalties to atk etc. granted by weapons by Cha-mod and may apply Weapon Focus etc. to all his weapons. Pretty annoying oversight: It is pretty evident that advanced weapons/armor training refer to the class option by the weapon master and the pdf notes “see below” for these, when the respective lists are curiously absent from the pdf, requiring some research, which was no problem for me, but may annoy or confuse less rules-savvy players.

The hybrid class does receive some serious supplemental options, with favored class options for a metric ton of Porphyran races as well as two archetypes included: The first would be the Glory Hound, who receives a variant cry to arms that focuses on keeping allies standing/last stand like visuals. Instead of outlandish ways, he may use Cha-mod instead of Dex to calculate Ref-saves and has an aura that allows for rolling twice when trying to resist fatigue/exhaustion with 16th level netting a 1/day sympathetic vibration. The second archetype included here would be the revolutionary, who replaces judder strike with Gunsmith and is locked into the firearm weapon group, with several unique benefits. Solid.

The pdf also features 12 new feats, though some, like gaining +4 to Bluff to convey a secret message, must be called filler here. The judder strike mechanic of the class can be modified via different feats,, adding for example save-or-be-deafened effects to judder crits, a 15th level quivering palm duplicate…and there are other interesting tricks: Sharing temporarily combat feats via drills, for one. Also nice: Healing while affected by bardic performance…and yes, it cannot be cheesed. The fire-damage-dealing enhancing Flamboyant Style is pretty cool. The pdf concludes with Captain Mynxie Marie, a nice CR 10 sample armjack who even comes with a brief ditty.

Conclusion:
Editing and formatting are very good, I noticed no significant glitches in the rules-language. Layout adheres to Purple Duck Games’ printer-friendly 2-column full-color standard and the pdf comes fully bookmarked for your convenience. The pdf has no art apart from the cover.

Aaron Hollingsworth’s armjack is frankly better than I expected it to be. From the base-classes and the blurb, I expected the class to be an identity-less option, one of these “let’s smash two classes together”-hybrids. The armjack is NOT like that. The class options and playstyle are distinct and set it apart as a class from both of its parents, which is a big, big deal for me. On the downside, when compared to the author’s amazing Luminary (seriously worth getting!), its identity is less pronounced – when you see the class in combat, you won’t necessarily identify it immediately as an armjack.

That being said, I consider it pretty jarring that the advanced training options have not been included, particularly since they would have offered a means of further tweaking the established options in favor of new and unique tricks. That being said, the class even manages to sneak in some mechanic innovation here and there. So, how to rate this? That’s where it becomes a bit difficult for me: The armjack is a viable, well-crafted hybrid class, but one that feels like it does not realize the full extent of its own potential. Hence, my final verdict will clock in at 4 stars – a nice, if not perfect addition to the Porphyran class roster.