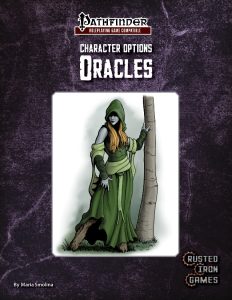 We begin after a brief introductory passage with three oracle mysteries, the first of which would be “Giant World” – the class skills added here would be Intimidate, Perception and Knowledge (nature), with the bonus spells running the gamut from giant forms to enlarge person. The revelations available allow you to increase size (and weight!) of unattended items at touch temporarily, a Brew potion and later, heroes’ feast-duplicating cauldron, making an extradimensional giant’s home that scales in potency, gain greater resilience (Toughness, Great Fortitude, Improved Great Fortitude) and, pretty impressive, an ability that deals with the mess that are oversized weapon-rules in a way that is actually functional by means of two spell-analogues. Energy resistance based on giant blood, a booming voice with associated SPs…the mystery is thematically concise and culminates in increased size as well as attribute bonuses, natural AC and the giant subtype.

The second mystery herein would be the masks mystery, which nets Bluff, Disguise, Intimidate and Perform (acting) and, spell-wise, begins with disguise self and moves up to overwhelming presence. The mystery takes its concept not necessarily as literal and rather as metaphyiscal – so adaptation to below water, elemental spell enhancers and resistance, nondetection that upgrades to mind blank, quick changing of masks…wait, what? Yep, the mystery actually employs a nice focus-mechanic for the abilities, which introduces an interesting RPG-angle to the class option, one that also sports a suggested sample table. The capstone, finally, eliminates that component. And yes, the pdf codifies mask-changes etc.

Thirdly, there would be the mirror-mystery, which nets Knowledge (arcana), Perception and UMD and spell-wise begins with mirror polish and moves up to gate. The revelations include summoning from mirrors, ignoring age penalties, doing the Narcissus-move and fascinate a creature with its image, create mirror images, divine from it, replace Dex for AC and CMD-purposes with Cha or use mirrors to generate cones that suppress a school of magic. A mirror dimension/magnificent mansion and the transferral of wounds to a mirror image further enhance the cool options available here. Cool: As a capstone, you gaina construct duplicate behind the mirror and while you may not enter this reflection, you can transfer willing/helpless creatures and items back and forth. Very cool! By far the best of the three mysteries – oozes flair!

We also cover a total of 6 oracle curses: Claimed oracles can’t aid another, do not count as flanking allies and are exempt from teamwork feats etc., but receive Mobility and a couple of bonus spells. Entranced oracles suffer a penalty to Perception and Sense Motive, but gain immunity to being fascinated and receive a bonus to concentration as well as Iron Will and later, its Improved brethren alongside commune and find the path. Oracles with a halo suffer from faerie fire when casting divine spells, wrecking Stealth, but gain light-themed bonus spells. One-handed oracles have a wrecked off-hand and gain, bingo, hand-themed bonus spells, from humble mage hand to grasping ahnd at 15th level. Stonehearted oracles have taken a cue from fairy tales, having literally a heart of stone, which excludes them from all morale bonuses, but nets them a bonus versus emotion effects and immunity versus heart-targeting effects. 5th level provides emotion- and mind-affecting immunity, which is rankly too much for the level. 10th level nets 25% fortification and 15th level 1/day ignoring of an insta-kill/destruction ability. I’ve seen the idea of the whispering voiceless oracle before, which is exempt from voice-based skills and e.g. the shout spell (not properly italicized here). 3/day Silent Spell sans spell-slot increase and some bonus spells complement this one.

Finally, the pdf offers an oracle archetype, the ironwood oracle. These guys get a modified proficiency-list, draw their spells from the druid list and may choose a revelation that allows for longer, quasi-wild-shape-y shapechanges. Pretty much the definition of bland filler and cookie-cutter.

Editing and formatting are good – I did not notice any glaring mistakes, though a couple of minor hiccups can be found. Layout adheres to Rusted Iron Games’ two-column full-color standard, is relatively printer-friendly and the artworks used are solid stock art. The pdf comes fully bookmarked, in spite of its brevity, which is a definite plus.

This is, unless I am sorely mistaken, the first pdf by Maria Smolina I have reviewed and it is not bad for a freshman offering. Indeed, I am pretty enamored by the mirror mystery and while I wished the mask mystery used the intrigue rules, this pdf’s release preceeded that of Ultimate Intrigue, so it gets a pass there. The mysteries presented here are pretty worthwhile, though I do wish they were a bit moe daring in their designs: Bonus feats and spell-duplicates don’t really excite me all that much. That being said, they are thematically concise and even when they go spell-in-a-can-y, they tend to at least provide an interesting framework. The mask-engine for the corresponding mystery could have carried more than what is allotted to it. The curses left me less impressed for the most part, with the stonehearted curse, while overshooting its target a bit, being my favorite. With a slight nerf/redistribution of abilities, it’ll be one damn cool option. The archetype is by far the weakest part and pretty much constitutes a non-entity compared to the rest of the pdf.

How to rate this, then? Well, this is, as far as I’m concerned, pretty much a mixed bag that shows potential; at the same time, it shows hesitation to dive into the more complex facets of design, a hesitation which, from what I have seen, is not necessarily justified. Next time, dear Maria, in case you’re reading this, dare to go all in! There are some aspects here I did like, which is certainly more than I can say about the installment on witches. Hence, my final verdict will clock in at 3.5 stars, though honestly, I can’t find it in me to round up – while nice stuff is in here, I feel it’s not enough to make this transcend being a mixed bag.