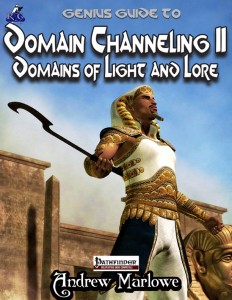 This expansion to RGG’s system of domain channeling clocks in at 18 pages, 1 page front cover, 1 page advertisement, 1 page editorial, 1 page SRD, leaving us with 14 pages of content, so let’s take a look, shall we?

After one page of aptly-written fluff, we are introduced to the matter at hand – or rather, the basic premise of this pdf: Expanding on the rules presented by the Genius Guide to Domain Channeling, which covered the core domains. Since the additional domains released so far would have gone far beyond what one pdf alone could cover – hence, this time around, the pdf also covers the functionality and interaction with subdomains, loosely based on the concepts of light and lore, akin to the exalted domains back in the day.

One short glance at the massive table which spans no less than 2 pages also immediately makes clear that I probably shouldn’t just list the benefits of each domain’s channel effects – at least not if I don’t want to bloat this review. So let’s check out some examples, shall we?

Now the alternate channel effects, the pdf provides a significantly diverse array of options – the effects include the option to expend a use of channel energy to treat an activated item’s CL as the CL of the activator. Characters with access to the attunement can expend any number of channel energy effects to provide significant bonuses to atk/damage for cha-mod rounds. On the nitpicky side, this references a “Willpower save”, which should be just a Will save” – but that’s not a glitch that will influence the verdict. Speaking of typos ” When you channel energy for any single effect you have access to effect” has an ” effect” too much – here, the ccp-glitch makes the ability slightly harder than necessary to understand – but the dazzling light emitted by channel effects is pretty cool.

Channeling a distracting lust-based debuff may be cool, but gaining incorporeal chains that not only allow for a bonus to AC, but also helps grappling incorporeal creatures – and if that seems powerful – well, you become fatigued after using this channeling options. The Defense subdomain nets you SR 11, +2 per channel die for cha-mod rounds. Rerolls for saves against detrimental mental effects accompany the healing powers of the love subdomain, while hijacking constructs (with HD-limit and potentially, Cha-checks to wrestle for control) works pretty well. Using channel energy as counterspelling fuel versus arcane spells.

The ideas generally are pretty awesome, though there is some internal inconsistency to be found here and there – the aforementioned construct control channeling, for example, specifies the DC specifically – which isn’t bad. Other channel effects don’t – which isn’t bad either – after all, channel energy has a default save attached. On a very nitpicky, formal side, though, providing the save once and then not in another instance can cause some minor confusion – once again, not something truly to the detriment of the pdf, but also a minor cosmetic hiccup.

Now what constitutes a more significant issue with the selection of domain channeling tricks herein, can be summed up with two words: Internal consistency. Minor buffs/debuffs on the one hand…SR and even more powerful effects on the other hand. Take the gibberish domain: 1 round per channel die no written or verbal communication, no spellcasting with verbal components. Yes, this is a pretty powerful save-or-suck and it has a 3rd level prereq, but still…not sold in direct comparison. The Resurrection subdomain on the other hand, is a thing of beauty – it nets the channeler the ability to expend two uses to restore life to a fallen comrade, with significant starting hit points…but only for a time. The massive issue with this one, though, would be that the ability specifies it works like raise dead – which means two permanent negative levels that stack with the ones used to bring the creature back for good… and that would be pretty nasty and render the ability nigh useless.

Temporarily ignoring difficult terrain, channeling the spirits of adventurous ancestors, temporarily alleviating the effects of ability damage – -the effects are diverse. Singing damage-causing hymns with songs of agony can even be considered downright awesome, as is the awesome option to significantly upgrade any overland movement travel. Need some iconic imagery? What about dealing damage to weapon, potentially transforming broken weapons into ploughshares or similar tools…yeah, damn cool!

Editing and formatting are good, I noticed no glaring glitches – those that are here, mostly can be chalked up to nitpickery and very minor hiccups. Layout adheres to Rogue Genius Games’ 2-column standard, is printer-friendly and the stock-art is solid. The pdf comes fully bookmarked for your convenience.

Andrew Marlowe’s domain channeling is downright inspired in more than one instance – often, the scaling benefits are elegant and cool, utilizing unconventional mechanics. That being said, the overall power of the options varies by quite a bit, from non-scaling bonuses to scaling ones, the relative strengths of the respective channeling effects does not feel particularly consistent to me and should definitely be inspected by a DM using this pdf – some low-powered campaigns may consider some of these feats to be a bit liberal regarding when they become available. In the end, I will thus settle for a final verdict of 3.5 stars, in spite of the minor issues rounded up due to the presence of a number of truly inspired ideas herein.

You can get this nice expansion to domain channeling here on OBS and here on d20pfsrd.com’s shop!