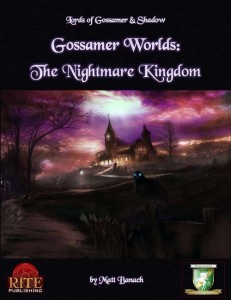 The third in Rite Publishing’s series showcasing the infinite worlds of the Grand Stair, this one clocks in at 11 pages, 1 page front cover, 1 page editorial, leaving 9 pages of content, so let’s take a look!

So what is the Nightmare Kingdom? Well, the nightmare kingdom is, as the in-character narrative postulates…strange. Even for the Grand Stair. There is a theory postulated (which may or may not be true) that the Nightmare Kingdom can actually reach places without using the Grand Stair, drifting through shadows and luring unsuspecting beings in. Touching the infinite worlds via closets and subverting doors, the hellish conglomerate of the fears of a thousand times thousand worlds is a domain, yes, but it is also a curse that may actually claim characters as its master…though the current master/slave of the realm, the entity known as the Ghoul, might not take kindly to such an intrusion. Fears made flesh, the boogeymen, which can include anything from the legendary man with red hands to cthonic horrors, the slender man or just about any other dreadful creature you can concieve, populate this deadly place and hence, 3 different takes on handling horror in LoGaS are provided herein for a given group to use.

And yes, tinseltown Hollywood, a Stephen King-inspired small town in Maine and the dark, dark cousin of NYC are provided as sample places that exist physically in the Nightmare Kingdom. Have I mentioned that in this world, psychic sustenance actually may nourish you, heal wounds and even change reality via the shaping of fears?

Editing and formatting are top-notch, I didn’t notice any glitches. Layout adheres to LoGaS’ 2-column full color standard and the artworks by Trung Ta Ha, Liew, Henry Toogood, Malcolm McClinton and Vince Ptitvine are glorious – I have seen neither before and think at least the cover is original – in any way, they are GLORIOUS and drive home the creepy atmosphere of this world.

Matt Banach’s Nightmare Kingdom, indebted to Ravenloft in concept and flourish, makes for a great, terrible place to introduce to one’s campaign and offers infinite potential for deadly horror of all shapes and forms in your LoGaS-game – combined with the great mechanics and writing, I’ll settle for a final verdict of 5 stars + seal of approval.

You can get this awesome little supplement here on OBS and here on d20pfsrd.com’s shop.