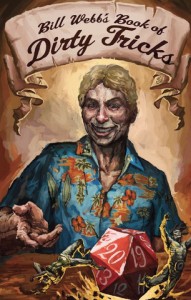 So…Bill Webb has somewhat of a reputation for not only being FGG’s mastermind, but also for being a capable and deadly DM – one I didn’t yet have the honor to play with, but from what I’ve heard – wow. And this book, well, it contains some of his nastiest tricks – which makes for an interesting read, so let’s see if even jaded DMs like your truly can draw some neat tricks out of this one!

The pdf kicks off with an introduction -and something that makes the book rather interesting in sensibility – Bill’s game is a blend of old-school, Sword & Wizardry and 3.X/PFRPG sprinkled in and hence, throughout the book, Skeeter Green has boxes, where he explains changes in terminology in the system, provides spell-conversions into a given system and generally elaborates peculiarities, making this book MUCH more useful than it would be otherwise. All right, got that?

One glorious house-rule herein is rather interesting -XP for GOLD SPENT. No, seriously – think about it: Clerics building temples and sniffing good incense, paladins giving alms, rogues and fighter gambling and whoring -it makes for a great way to handle e.g. XP gained via downtime etc.- even better if you want to have leveling actually take some time and entail some…things that happen. A great roleplaying catalyst! Alternate weapon damage, attributes and bonuses, travel etc. are also provided, though these will probably primarily be a godsend for DMs who want to defuse the rules-heaviness of PFRPG’s crunch, for they represent essentially concise, but still a bit quick and dirty simplifications. Now the “got lost” charts and rolls on the other hand are truly awesome and simple for just about every system they’re used in -especially thanks to proper survival DCs etc. also provided.

Simpler rules for food and drink, foraging etc. are also in here – more interesting and yet another godsend-level table would be the concise 50-entry-three column table to generate unorthodox door opening mechanisms – so simple and yet so flavorful – awesome! This also extends to actual specific trigger-mechanisms for traps.

We all have been there – the moment where players just are incredibly LUCKY. I once had it happen that a PC could ONLY survive by a) winning initiative (enemy rolls 1, he a 20) – he did that. Thereafter, he had to crit the foe and confirm – two twenties required, both rolled. THEN he still had to roll max damage with a d10 and 5d6 AND then, in order to not be destroyed by his godlike adversary, he would have to roll a 10 on a d10 (indicating fatal head wound) and then a natural 100 on a d% in order to manage an instant-beheading according to the crit rules I used back then. Every other outcome would have seen him SLAUGHTERED. Well, do the math – I did not expect this character to survive. He did. Players are lucky…and this one suddenly had the regalia of literally one of the most powerful warrior-lords EVER to walk the lands, plus his fortune as by custom of trial by combat.

Where I’m getting at with this anecdote is – sometimes players are lucky, deservedly so – but the consequences might prove to become issues for the balance of the campaign. Hence, the next chapter is all about handling players with too much treasure via quite an array of options – several of them rather nasty, but concise and best of all: They make sense -both in a historical context of fantasy and in-game – just think about all those times in the stories and comics Conan got a fortune and was subsequently deprived of it (when he didn’t squander it to convert gold to XP, that is!) – yeah, that level of loss. Now here’s a huge issue I have as a reviewer – I *could* go into detail regarding all of the tricks, as I usually do – but that would somehow defeat the purpose of this book.

As soon as the tricks as made obvious, players are more likely to consider them as such and not as just a concise development of the campaign – by exposing them, I’d hurt their effectiveness. So I’ll refrain from that – just one thing: Whether it’s an AP kind of on the wrong side of a despotic city’s law, a certain mythic incursion into an abyssal landscape or a certain kingdom-building experience – there’s a fitting trick for just about every context here.

The next chapter is called “Situational Advantage” – and is glorious – generally, it is a DM’s primer for some cool environmental hazards/modifications/tactics, with neat mechanics to supplement them – and you gotta love the Pepé-Le-Pew giant skunk-entry. Now there are also some other glorious terrain books out there, but this chapter still makes a great supplement for some rather nasty hazards…

Next up would be a chapter that my players would HATE – because I’ve used similar tricks: Magical keys that do nothing, Unobtanium and similar nasty tricks and time wasters are exceedingly efficient at making players not analyze EVERYTHING – but there’s another benefit: A DM can use these tricks as blank spaces to later revisit and improvise contexts that weren’t there before, retroactively fit in storylines and the like – and no, not going into all the details of this chapter. Once again – less effective if players know what they’re up against.

The next two chapters also are smart – Wolves-in-sheep’s clothing and vice versa – with these, you can drive home the fear of the unknown, read advice on unkillable (no, seriously! You CAN’T kill these! Yes. Pointy sticks and arcane fire aren’t always the solution!) monsters or traumatize your players to be afraid of mold. No seriously – my players start gibbering and running whenever something mold-related comes up. Demons? Pfff. Bring out the unmoving fungus! With the tips herein, you can make YOUR players afraid of whatever you like! (And if you require further assistance – drop me a line!)

Now the trick-chapter is also interesting -from stacking certain hazards/obstacles to puzzle-style combat to tesseracts and portals – a lot of goodies here.

Finally, we have a great chapter called “Greed is bad” – from pointing towards the timeless “Don’t drink two potions at once”-table from 1E (seriously – hunt that one down!) to some other…interesting tricks to make players stop succumbing to Karzoug’s favorite sin, this is a fitting conclusion to this nice booklet.

Editing and formatting are top-notch, I didn’t notice any significant glitches. Layout adheres to a one-column b/w-standard reminiscent of small booklets like digests. The print-edition, which is btw. of top-notch quality, does also adhere to this size.The pdf provides ample, cool and iconic old-school b/w-artworks. The pdf also comes fully bookmarked for your convenience.

Wow, this was an uncommon ride for me – mainly because reading this book was somewhat a blast from the past, with many tricks implicit in the old-school of adventure design properly and concisely spelled out. While the house-rules herein may not be to everyone’s liking, DMs and groups looking for simplification got one awesome resource here. Furthermore, some of the tricks are glorious, while others elicited a “D’unh” from me – the latter though, as I realized, mostly due to me coming from kind of (though not wholly – Bill Webb’s old-school credibility vastly outclasses mine!) this school of DMing. I.e. my game is lethal, PCs die and the world is not conveniently CR-stacked for PCs to slaughter. I started thinking, and relatively soon realized that most new-school modules simply don’t use tricks like these – and worse, were limited to the module, whereas most of the tricks herein actually help keeping a campaign going, not a simple module.

And as every DM who ran something that was not a plot-driven AP can attest, it is campaigns, with freedom, strange choices and especially sandboxes that can provide the problems this booklet combats. As such, and due to the ridiculously low price, I can wholeheartedly recommend this useful book – even if you’re a better Dm than me and know every trick in this book already, it still makes for a cool blast-from-the-past-style reading and should inspire some rules-changes/refreshing of the mentality at the heart of FGG’s success. Congrats to Bill Webb and developers Skeeter Green and Matthew J. Finch – well worth 5 stars + seal of approval.

You can get this cool little booklet full of nasty tricks here on d20pfsrd.com’s shop!