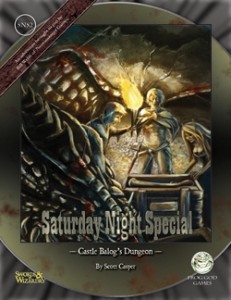 This module is 28 pages long, 1 page front cover, 1 page editorial, 1 page ToC, 2 pages of SRD, 2 pages of advertisement, leaving us with 21 pages of content, so let’s take a look!

This module, as the introduction tells us, is loosely based on Gen Con IX Dungeons by Bob Blake and thus can be considered a blast from the past – story-wise, the PCs are coerced into venturing into the eponymous dungeon by an old grumpy wizard named Framnagle to retrieve a family heirloom staff stolen from him by a former apprentice whom the wizard transformed into a dragon in a night of drunken escapades, only to have the apprentice turn to his arch-nemesis, Grwn Gruenwald.

The first two levels of the dungeon are not detailed in the module and it kicks off in the third and relevant level of the dungeon of Castle Baldemar after a short basic glossary on the town of Corvusrook. The dungeon per se is a relatively straight-forward dungeon-crawl, opening with minotaurs and going on to feature multiple undead, an enslaved stone giant, a rakshasa etc. The strength of the dungeon, though, would be its design-philosophy and emphasis on deadly traps which often require more than just a simple roll to get the gist of and which oftentimes feature a way to bypass them altogether.

That being said, e.g. a tiled room would require that the two pages of maps be printed out to the players – problematic since the maps come only with all DM-info included – no player-friendly maps here.

When run for people familiar with the original module, the overall complex will have some nice variation and include, among others, classic tropes like demonic urgings to sacrifice comrades. That being said, the climax versus the final boss, the apprentice turned dragon, allows for smart PCs to bluff the menace, which is a nice touch and an interesting end to a straight-forward crawl.

Editing and formatting are not bad per se, but have some mayor issues – there e.g. is a room that lacks a means of ingress on the map and try as I might with my none too bad command of the English language, I honestly didn’t get, either from map or text, how a particular room’s trap is supposed to work, which I ascribe to simply bad writing – A trap’s description shouldn’t be more obscure than the references in a Joyce-novel. Layout adheres to a printer-friendly two-column standard, the pdf comes fully bookmarked and the b/w-artworks are nice, though nothing to write home about.

Which is exactly what sums up my thoughts about this dungeon. It has nothing truly going for it beyond nostalgia. The rooms are disjointed and make not that much sense in their array. The inhabitants are mostly not that smart and the fact that a CL 20 alarm-style spell makes stealth not an option when dealing with the final adversary feels like an attempt of shoehorning the party into a particular way of dealing with the module’s challenges. The fact that XP are awarded for not exploring rooms can be considered either positive or negative, but personally, I’m not keen on them.  And then there are the issues with the map, the lack of player-friendly maps and one fact:

This module, to me, might be nostalgic. But not only in a good way. Whereas Rappan Athuk, the Hollow Mountain or many other Frog God/Necro-products scratch that old-school itch, this module feels like an uninspired pandering that does not update a classic, but just modifies it without adjusting its content to the increased expectations and providing a face-lift.

In this day and age, where we have modules like Rappan Athuk, it should be clear that atmosphere and tension are not anathema to old-school-style crawls. This dungeon, in contrast, feels woefully sterile, generic and jumbled together – uninspired even, for there was not a single idea in here that I haven’t see done better somewhere else. Unless you specifically want to play this as an homage to its inspiration, I wouldn’t recommend you checking it out and even then, it falls a bit on the short side and could have used at least a slight narrative face-lift and a more unified and concise dungeon. For me, this module represents 5 bucks burnt, spent on a module that panders in an uncomfortable degree to my nostalgia and makes me recall what, pardon my words, sucked in the good ol’ days of modules, hence deconstructing the one component it has going for itself. I can’t for the life of me recommend this and instead urge you to get any other offering by FGG (or 4 Dollar Dungeon) instead.

Failing on a content-level, at least for me, harder than any other module I’ve read in quite a while combined with the map-glitch and writing-issues, I will make a controversial decision here that some of you are bound to not share- in this day and age, even with nostalgia-goggles, this, to me, is a 1.5 star-module, rounded down to 1 for the purpose of this platform.

If my review hasn’t deterred you (or piqued your interest), you can get the Pathfinder-Version here and the Swords and Wizardry-Version here on OBS.