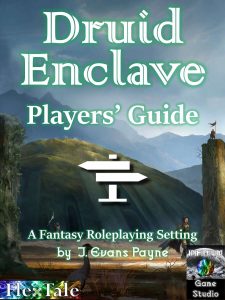 The massive player’s guide for the Druid Enclave supplement clocks in at a ginormous 200 pages; if you take away front/back end matter, you’re left with 193 pages; approximately 10 of these pages are devoted to explaining how to use this book; as Infinium Game Studios has a couple of unique things going on in their supplements, including quadded statblocks, etc., this is appreciated. It should be noted that the introductory section also features a couple of helpful angles: A brief “Game starts in 5 minutes” information briefing (sans SPOILERS) and some general hooks are provided. As brief summary of the setting of Aquilae’s peculiarities is also included here – thankfully, ocne more, this section is properly adjusted to be player-friendly.

This review was moved up in my reviewing queue due to me receiving print copy of the hardcover in exchange for a fair and unbiased review.

The book begins by providing the general information regarding the druid-run eponymous city, including a proper settlement statblock, and some notes on general fines imposed by law enforcement, as well as notes on encountering the watch; the encounter-summary here does reference the page-numbers of the big book. The random guard encounter table thus feels pretty displaced here, but doesn’t per se hurt the book. This out of the way, we are introduced to the council members that run the Druid Enclave, each of whom comes with a nice b/w-artwork, and a summary of races and alignment and classes, but without stating the class levels – a good thing, considering that general class is probably something the PCs can discern, while exact power-levels, well, obviously are not.

The Druid Enclave sports a surprisingly deep level of politics and faction interaction, and as such, the book prints the rules explaining the faction presentation here. Factions are presented with an overview, a brief description, and are classified by type as military, intelligence, trade, etc. Beyond that sigil, alignment, racial restrictions if any, key motivations and day-to-day goals are noted alongside long-term objectives. Notable philosophies, such as phrases or mantras, are provided, and influence levels are classified in 7 steps, ranging from no influence to near total control. Faction reputation is similarly classified in 8 categories, and there are 9 categories to determine how old a faction is. A total of 14 general size categories are provided, running the gamut of regular size categories, but also including Family, Local, etc. 8 stability and resource categories are provided. Common traits, dues and taxes, general demeanor and membership notes are provided as well. The supplement also covers the peculiarities of religious factions, if applicable, noting favored weapons, domains, etc. All those categories come with d%-values, so if you want to randomize faction sizes, powers, etc., this system per se delivers. While I don’t necessarily think that the section needed to be in the player’s guide, it does render reading the faction write-ups simpler. Beyond that, I consider the orientation provided by these components as a valid strategy to think of factions in a structured manner, so yeah, nice.

Speaking of which: We begin with two write-ups of major deities, namely the hardliner Zugul, god of order, and Sheergath, who is probably one of my favorite fantasy deities, concept-wise: The deity is usually depicted somewhat goatlike and is CN – and the portfolio? Resigned fate. The deity teaches acceptance, and is as such popular for the downtrodden and those screwed by life. It is at this point where I should note that names for members depending on their station are included for the factions, which is a nice touch indeed. Beyond tehse religious factions, we have no less than 12 local factions, which include the dwarven miner’s union and administration already noted in Dark Obelisk II: The Mondarian Elective, and beyond that includes e.g. guilds for Pelters, farmers, hunters, etc., all properly noted. In many ways, this prominence of factions/guilds does add something subtle to the overall supplement: It makes it feel more lived-in, realistic. You probably know how important guilds among craftspersons were in the medieval age and beyond, so having something like this? It makes the city feel more plausible. 14 additional factions are provided beyond the local ones, which include the secretive information-gatherers of the Scarlet Path, the Order Mechanique, couriers and more – we essentially get a good overview of the movers and shakers of Aquilae here, and I very much enjoyed reading this sub-chapter.

The next massive chapter is devoted to player-friendly maps – the chapter sports an overview of the enclave’s levels in a sideview-ish organization, and then proceeds to present the metric ton of maps herein; as always for Infinium Game Studios, the player-friendly maps really deserve their name: Trapdoors and secret doors on the GM maps have been properly redacted, going that extra mile that I love seeing. Speaking of which: Like the Mondarian Elective, the quality of the maps is higher than in the first Dark Obelisk. The city may look more ordered than a dungeon, but the amount of detail, from weaponry lying on tables to crates etc., is extraordinary. It’s little touches like e.g. a table that doesn’t have one chair cut-copy pasted, with some of them farther under it than others, that your conscious mind may not immediately pick up, but ultimately, your unconscious does. While a few assets are reused, with a carpet being a good example, the maps nonetheless achieve an attention to detail and general sense of being organic that I’d have considered to be nigh impossible to achieve with a map-tool prior to the release of Dark Obelisk II.

While some maps sport a few more of these touches than others, as a whole, the extensive cartography allows you to genuinely *see* the settlement in all of its details. Infinium Game Studios’ trademark excess regarding details is a rather impressive asset here. Speaking of assets: I am also particularly fond of the fact that there are translucent outlines of buildings depicted over the basement levels. In case you wondered how any GM can keep control over so many maps: Each map has its own letter-code, like DE-GL-EGE, which allows for quick and precise searching and communication between GMs and players. IN case you were wondering: These letters follow their own, simple logic: “DE” stands for “Druid Enclave”; “GL” for “Ground Level”, and “EGE” is the “Entry Gardens East”-map. Simple, easy to grasp, and actually very easy to use at the table. The secret areas of the Druid Enclave do not feature in the player’s guide, thankfully.

The final chapter deals with a ton of NPCs, sporting notes on an overview of the NPC, as well as general appearance and demeanor – these GENERALLY tend to be helpful, as they do not give away crucial details. Generally. When it comes to less savory individuals, things do become problematic. For example when it comes to the Black Market Leader, who has this very profession listed next to his name! Or take the assassin (in profession, not class), who has “(Assassin) in big, fat letters next to her name. That sort of information should be redacted in a player’s guide! Not cool! That’s the one thing that this Player’s Guide really botches, which is particularly weird, considering how the write-ups generally otherwise do a solid job avoiding spoilers. Also weird: Two of the NPCs have stunning full-color artworks; the individuals are obviously sisters, and one sister’s write-up notes that she styles her hair differently from her sister to look distinct from her. This directly contradicts how the two artworks depict them – with the same style of haircut. It’s a small thing in comparison, but it stood out to me.

Editing and formatting are better than one would expect from a one-man enterprise that produces tomes of this size. Layout adheres to Infinium Game Studios’ 2-column full-color standard, and the hardcover sports the handy color bands on the side that let you quickly jump to the correct chapter. Cartography, as noted, is really detailed and goes the extra mile regarding player’s maps. The original pieces of artwork, mostly in b/w, provided for the NPCs is a neat plus, though e.g. seeing a rather evil/grim-looking man described as a happy stoner may at first seem odd. In dubio pro reo, though: I assume that this contrast was chosen intentionally, and it’s the exception, rather than the rule: An artwork of a heavily-tattooed one-eyed dwarven lady, in contrast, really put a smile on my face! The artworks are generally well-chosen. The hardcover sports the name on the spine, as proper.

J. Evans Payne’s player’s guide to the Druid Enclave, while structurally akin to the one presented for Dark Obelisk II, does not run afoul of the same issues: The book, for one, does not spoil mechanics of the supplement. As Druid Enclave is structurally closer to Dark Obelisk I’s Berrincorte-settlement’s depiction, it provides a player-centric overview of the vast settlement and its political structure, and does so well. While the spoiling of secret identities and functions in the NPC-section is a big no-go, it remains the only faux-pas of the supplement, and it’s one that could be explained by making it an “open secret” or by PC-connections. Oh, and then there’s the fact that this is FREE as a pdf, and I’m pretty much certain that $19 for a 200-page hardcover is at-price for printing, making this a super-fair offering. As such, my final verdict will clock in at 4 stars.

You can get this massive player’s guide for its super-fair price here on OBS!