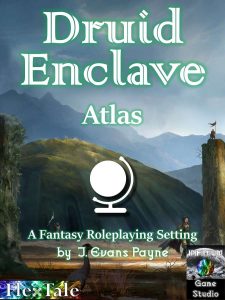 The massive atlas of the Druid Enclave supplement clocks in at 312 pages of maps, already disregarding front/back end matter.

This review was moved up in my reviewing queue due to me receiving a print copy of the hardcover in exchange for a fair and unbiased review. My review is based on this hardcover.

The book sports the handy colored bands on the side, which render navigation simple; as always, the maps have their letter-codes noted, which makes finding them rather simple. This massive atlas first features the GM maps, then the player-friendly maps; the latter have been featured in the player’s guide, while the former are in the proper adventure book.

Which brings me to the central note here: This premium atlas only makes sense getting if you do not plan on getting the main Druid Enclave book. Why? Well, the primary selling proposition of the premium atlas, usually, is the massive amount of player-friendly maps, and in this instance, since the Druid Enclave is essentially a town and not an adventure area, those already are featured in the player’s guide.

The book misses a HUGE chance, in that it does not provide player-friendly versions of the secret areas redacted on the player maps. To elaborate: One thing I love about Infinium Game Studios, is that the company  properly redacts secret door “S”-indicators, trapdoors and the like properly; on the player-friendly maps, none of these are present, walls are thick, etc. The downside of this practice, though, is that there are secret areas hidden beyond those doors – and said areas only exist in the GM-map iterations. It’s one of the things that really irked me about Dark Obelisk II as well: Once the players do unearth a secret area, they suddenly don’t have a player’s map any more, and you have to use the GM-map.

The player’s guide to Dark Obelisk II only sported the maps for the initial settlement, not the mega-dungeon, which rendered the premium atlas a super-handy resource for that book, courtesy of all those player-friendly maps for the mega-dungeon; the same can’t be claimed here. If you have the main book and player’s guide, you have all the maps, and there is relatively little reason to get this, with the main draw here being that the atlas sports zoomed-in versions of some of the overview maps that were not included in the PG.

That out of the way, if you are just looking for a metric ton of full color maps, and don’t want the main meat of the supplement, then this certainly delivers. The maps, while made with a tool, are genuinely better than I’d have deemed possible with the like prior to DO II, full of details and small tidbits that make them stand out. They achieve the task of making you feel like you’re exploring  dynamic, lived-in settlement.

Now, as far as ratings are concerned, it really depends: If you plan on running Druid Enclave, SKIP THIS. You do not need this, and it literally offers only little additional value. For you, this is a 2-star-dud.

If, however, you do not plan on running Druid Enclave, then this is certainly is worth the asking price, and if you want to get an idea of the style of maps, you can download the FREE player’s guide and check those out. If you like what you’re seeing, then getting this will be worth the asking price. For you, this’ll probably be a 4-star supplement. For you, only the absence of player friendly maps for the redacted areas remains as a detriment.

There is no fair reconciling of these points of view; hence, my final verdict will be JUST for people not interested in the Druid Enclave book. For you, this is a massive array of maps for a fair price, and as such, a 4-star book.

You can get this massive atlas here on OBS if you just want the maps!