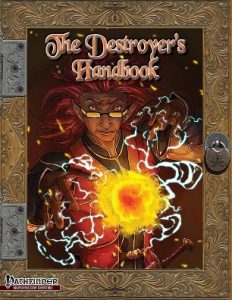 This installment of Drop Dead Studios’ Spheres of Power-expansions clocks in at 40 pages, 1 page front cover, 1 page editorial, 2 pages of SRD, 1 page of back cover, leaving us with 35 pages of content, so let’s take a look!

After the introductory prose, we dive right into the archetype-section of the book, with the first being the Admixture Savant elementalist, who gets a modified skill-list, casts via Int and gains an admixture pool instead of evasion and the dodge bonus at 2nd level. These points may be expended to either remove the increase of casting time of the Admixture talent or reduce the spell point expenditure of metamagic feats by 1 point per admixture point spent. Instead of combat feats, these guys gain metamagic feats and 3rd level allows them to target adversaries with destructive blasts, gaining +1/2 level as a bonus to damage, with 9th and 15th level increasing that further, though at the cost of favored element. 11th level provides a wild card destruction sphere talent and as a capstone, we have a spell point cost reduction for blasts modified with metamagic.

The blaster armorist gets an arm cannon bound weapon, which attacks touch AC and has a base damage of 1d6, +1d6 at 5th level and every 5 levels thereafter, with no range penalties and a maximum range of close, being treated as both a destructive blast AND a ranged weapon. Destruction is granted as a bonus talent (with replacements, should you have it already) and unique arsenal tricks being provided as well: With buckler as a secondary function for the cannon, charging your shots, gaining an intelligent cannon or adding blast shapes to the cannon, the archetype has some seriously cool tricks – and yes, this can be considered to be the megaman-archetype. Kudos!

The doomblade mageknight, can, as a swift action, form his blast into a blade-like shape that lasts for casting ability modifier rounds – cool. And yes, takes blast shape etc. into account. Elemental Scion shifters cast via Cha, get a modified skill list and gain the Alteration sphere as well as Elemental Transformation, but also beast soul as a drawback sans associated granted talent and, should the character already have the like, proper wording for these cases. The class may use a lesser Elemental Transformation sans ability increase, fly speed, earth glide etc. (but also sans spell point cost!) and, at higher levels, reduced costs for elemental transformation when using the talent self-only. When in the shape of a given elemental, the scion increases the potency of associated destructive blasts.

The entropic sage hedgewitch loses traditions and a modified proficiency list as well as the Destruction sphere and Energy Blade talent at 1st level, but also Focused Shape as a drawback, with monk-like AC and CMD bonuses as well as Improved Unarmed Strike at first level; higher levels unlock more monk-style benefits…and, in case you were wondering, the archetype is compatible with PFU’s unchained monk, allowing for the learning of ki powers as well as style feats. Interesting one!

The kinetic scourge mageknight has a modified proficiency list and gains both Destruction sphere and the Energy Tether talent as well as the focused shape drawback, with only move actions required for concentration of these tethers. The archetype focuses of ranged combat maneuvers via Energy Tether and e.g. anchoring flying foes via Tether Adept. The Soulfire Master Thaumaturge suffers no backlash when using forbidden lore, instead taking ability burn – Constitution, to be exact, which is regenerated after 8 hours of resting,but to offset this power-increase, backlash chance is increased to 50%, with 4th level unlocking Soulfire and burning lore sans risk of backlash and higher levels allowing for the passing off of Con-burn via channel punishment.

The wandslinger gunslinger would be, yup, another take on the wand-blasting gunslinger, complete with modified skill list, with the grit-determining attribute being treated as casting ability modifier. Interesting: grit can be used to prevent wand spell point expenditure for destructive lasts and aiming that increases range as well as Dex-mod to damage with destructive blasts from wands and Gather Energy when firing wands. 11th level provides dual-wand activation. Solid.

The second chapter herein covers basic magic, grouping blast type groups as well as providing blast shapes -from chain blasts to energy bombs and auras to using your destructive blasts to propel you forward, to gaining a satellite that you can discharge upon nearby foes as an immediate action to aforementioned energy tethers, the options are neat. Blast type talents are similarly diverse: Want alkali blasts that send foes to the floor? Done. Bull rushing stone hails? Temporary Fort-debuffs? Tripping nonlethal blasts? Temporary hit points for allies, balanced within SoP’s frame? Shrapnel or concentration/mental skill-check hampering blasts? The pdf obliges.

Other talents, including the aforementioned admixture, are provided as well – which deserves special mention, as it takes the discrepancy between blast die-sizes into account, providing concise guidance here. Cascading penalties, immunity to your own blasts…very helpful. Since SoP talents usually lack the descriptor tags (but they’re nice and pretty helpful to have) the pdf provides a short summary here as well – kudos.

Chapter 4 provides a smattering of advanced talents for your perusal, with an upgrade of Crystal Blasts to encase foes in cocoons of crystal. Extreme range energy sniping is cool: 1000 ft. + 100 ft. per CL (OUCH!) range, but it can only target squares or large objects, making it basically SoP-siege blasts. Personally, I’m not a big fan of sacred and profane damage featuring here, but since the primary source of conflict regarding these damage types are spells that are absent in SoP, I can live with them making a return here. Causing radiation sickness via your blasts in 4 radiation severities is similarly covered. Here’s the section, though, that will make this pdf a must-own buy for pretty much every SoP-using group: The chapter covers adaptation of new blasts: Basically, it codifies detrimental effects codified via blasts in an easy to grasp system, allowing you to create your very own custom blasts via an easy to grasp system. Two thumbs up!

The pdf also features two rituals as well 5 fully detailed incantations – that allow you to call forth spheres of annihilation, perform the dance of ruin, call forth omnimental or make willing/helpless targets walking bombs – this section is pure awesome.

The book also sports a wide array of new feats, with Arcing Strike blasts, higher crit-range, blasts that snake onward (combo-potential = awesome) or adding effects to specific types of destructive blasts. combo-sphere talents, feats to increase e.g. Energy Leap or better tethering – basically, the array here allows you to specialize in a wide variety of manners. The pdf also provides the shape focus drawback, 5 traits (with the proper trait-type) as well as tricks for the arsenal and incanter specialization. Fans of DSP’s races will certainly enjoy the alternate racial traits for Forgeborn and Dromites that are featured among those for more common races herein – if you’re like me and gravitate towards combining SoP and Psionics, you’ll certainly enjoy it!

The pdf also features new weapon properties and specific items that can be utilized to add weapon properties to blasts or imbuing weapons with them; massive disintegrating but unstable cannons, bullets of entangling crystal – pretty cool selection here and the cost/strength-ratio of the items generally seems to be neat as well – kudos!

Chapter 7, then, provides the bestiary, which contains the CR 7 crystal golem alongside 6 types of omnimentals (ranging from CR 2 to 12), adapting the classic creature concept well to the SoP-destruction sphere context. The pdf also features several templates, from destructive elementals to walking bombs and creatures attuned to elemental rifts. Finally, the last page provides a couple of tips and tactics for playing destructive blast specialists.

Conclusion:
Editing and formatting are very good on both a formal and a rules-language level. No complaints here. Layout adheres to Drop Dead Studios’ two-column full-color standard for these books, with a mix of stock and original full-color artwork. The pdf comes fully bookmarked for your convenience.

Andrew Stoeckle’s Destroyer’s Handbook had the potential to wreck the whole SoP system. It is my pleasure to tell you that it doesn’t. Instead of going a power-creep route, this focuses on options galore, with evocative concepts, unique tricks and a wide, wide arsenal of cool tricks to employ. But we’ve come to expect the like from these books. Where this one truly captured my heart and what elevates it from very good to excellence, though, at least to me, would be the DIY-build-your-own-blast section. Extremely useful and a perfect representation of the “Say Yes!”-enabling spirit of the Spheres of Power rules. My final verdict will hence clock in at 5 stars + seal of approval.

You can get this cool SoP-expansion here on OBS!

You can support Drop Dead Studios creating more cool SoP-expansions like this here on patreon!