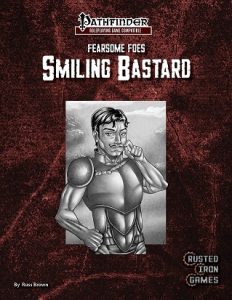 The second installment of the Fearsome Foes-series clocks in at 7 pages, 1 page front cover, ~1/2 a page SRD/editorial, leaving us with 5 1/2 pages of content, so let’s take a look!

After a brief introduction, we learn about the Knights of the Wall, an ~500 members-strong order of knights that is supposed to defend civilization and the colossal wall that guards it. These beings may be members of a new cavalier order, the order of the wall, sworn to protect civilization from the agents of barbarism. Challenge-wise, the cavalier and all allies flanking the target of a challenge gain +1 morale bonus to AC, which increases by +1 for every 4 levels the cavalier possesses. The order adds Knowledge (local) and (history) to his class skills and gains 1/2 class levels to Knowledge (local) checks pertaining laws, customs, etc. At 2nd level, the order grants +1 teamwork feat they can grant to allies with the tactician ability. On a nitpicky side – does this ability work if the cavalier trades in the tactician ability? I assume it does, regarding the wording, but I’m not 100% sure. Starting at 8th level, when an ally within 30 ft. of the banner fails a save, the cavalier may spend an immediate action to allow the ally to reroll. This can be used 1/day, +1/day at 12th level and every 4 levels thereafter. At 15th level, as a move action, the cavalier can wave his banner, allowing all allies that can see the banner to move up to their speed towards the banner and take a standard action. This can be used 1/day, +1/day at 18th level. I assume that this does not change initiative order.

The pdf also covers a sample cavalier 2 and his warhorse…and then, there would be the eponymous Smiling Bastard, Sir Barthold Highchurch – a despicable con-man, who, build-wise, is a daring champion/low templar and clocks in at CR 9 – rather nice, just fyi: The fellow actually has fall-back plans and the means to potentially escape fights that do not turn out as planned and, as a whole, I can see him work as a recurring villain. He does have a right-hand man, Black Winston, a fighter (cad) level 8. His build is more straightforward, but still nice.

The pdf also sports 4 different, solid adventure-hooks that deal with the smiling bastard’s dastardly schemes: Dressing ruffians up as orcs to force the local populace to sell their homes, for example. Yeah, he deservedly got his name. The pdf closes with 5 encounter combos to use the bastard and his fellows – these are just lists of creatures preconfigured for certain CRs.

Editing and formatting are very good, I noticed no significant hiccups that would impede functionality. Layout adheres to Rusted Iron Games’ two-column full-color standard and is relatively printer-friendly. The pdf sports an original artwork for the bastard, which is nice to see for a book this small. The pdf comes with excessive, nested bookmarks for your convenience.

Russ Brown’s Smiling Bastard is a solid character; much like a villainous anti-Jon-Snow, he makes for a solid, fun adversary and his second-in-command/cohort makes for a good additional threat. The builds themselves are neat. All in all, the smiling bastard is a cool NPC for a more than fair price. Hence, my final verdict will clock in at 4 stars.

You can get this inexpensive character here on OBS!