Descent into the Candy Crypts (OSR)

Descent into the Candy Crypts (OSR) 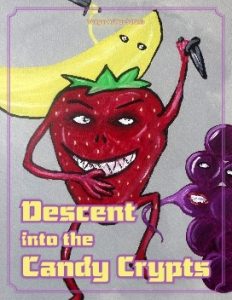 This module for Crimson Dragon Slayer clocks in at 14 pages, 1 page front cover, 1 page inside of front cover, 2 pages of editorial,1 page back cover/Kort’thalis glyph, leaving us with 9 pages of content, so let’s take a look!

The Candy Realms lie west of Valeece and are inhabited by candy people (which are also known as candles). Sounds nice, right? Well, candy people are colossal a-holes. They are totally into slavery, considering themselves to be a delightfully sweet master-race. Fruit people, also known as Fruities, have been enslaved for a while by this vile nation and only recently threw off the yoke of the candy people oppression. Turns out they consider the candy folk to be too sweet…and aren’t really that much better. The big question is why the players of a Crimson Dragon Slayer game should care about that. Well, this question is answered by a d8-table.

This table includes having lost a leg to candy land-mines, having been cheated at cards by Cando Carysian, being the offspring of a dentist…you get the idea. Basically, you hate candy. Oh, and guess what. You can play the long-suppressed fruities!

There would be Strawberry Folk, who get -2 Strength and Willpower and 4 racial hit points, but have a mean streak: When you make a strawberry see red, you’re doomed: 1/day, they may gain advantage on attacks for level rounds. On a 2, they attack the nearest target; on a 1 they hit themselves while thus afflicted. To nitpick: Specifying that this pertains to the attack roll would have been helpful – it’s evident, but first generated some minor confusion.

Banana-men look like bananas with arms and legs and eyes…the eyes of a serial killer. They have no mouths. They get -2 to Dexterity and Charisma and have 6 racial hit points. 1/day, they can start a death stare that forces the GM to select another target when trying to attack them.

Thirdly, grapes. Grapes get -2 Strength and Constitution and 8 racial hit points. They look like anthropomorphized grapes…with a tentacle that they can 1/day you to seduce a target, making it inclined to non-violent conflict resolutions. Yeah…don’t try to picture it. Grapes are purple. Tentacles, purple…leitmotif for Kort’thalis. The rules here could be slightly more precise, but as a whole, you can grasp their intent.

The module comes with conversion notes to other old-school RPGs and has a d12 “Let’s make this interesting”-table for the GM: From granting laser guns to every foe, finding the necromonicon, to boys that can use wishes – basically, this is the big chaos-infusion if, at one point the GM gets bored and things are running too smoothly.

And that is as far as I can go without going into SPOILERS. Potential players should jump to the conclusion.

All right, still around? Well, the module takes place in the Too Sweet Asylum’s ruins – the place seems to have rotted from within, like a bad tooth…and below it lie the eponymous candy crypts. Within the ruins of the asylum, one can encounter ring pop wraiths, a convenient dentist (for those that abuse cotton candy healing) and fruities planning the infiltration of the compound – for below, in the candy crypts, there are fruitie prisoners to be freed. And yes, a kiwi-fruitie speaks with a New Zealand accent. Obviously. Treacherous peaches and a genius-level insane pina-colada marshmallow can also be found among the prisoners and the PCs will stumble over the dread result of candy genetic engineering…and potentially blow up if they fail to stabilize a sabotaged generator about to bust. Guards are btw., obviously, donuts and can jam you into their hole, squeezing hard for serious damage. This sentence sounds somehow so damn wrong…

Anyways, a small chocolate river contains a deadly fudge golem must be passed and there would, obviously, be the evil lolipop king with his butterscotch wizard, who has a CANDYFICATION MACHINE! Beyond this horrible threat, the gumdrop ichor, the dread peanut brittle vampire – there a copious amounts of bonkers foes. And yes, the module for a system that quotes Heavy Metal F.A.K.K. actually quotes South Park’s Cat-Piss-episode quoting Heavy Metal F.A.K.K….which, I’m pretty sure is one step short of generating a referential black hole… Oh, and I should also mention the cherry light district in the crypts. 5 rooms are devoted to…yeah, there’s a sugarplum faerie stripping on a pole. There is a rap battle in process. And a jello massage parlor. I’ll just add my voice to the comment of the module: “You don’t want to know what goes on there.”

The pdf also has 4 magic items – a sword of vengeance, a lightning wand, kryptonite candy…and the amethyst ring of WTF, which ties in with the Purple Islands of Putrescence.

Editing and formatting are very good, I noticed no serious glitches. Layout adheres to a 2-column standard and is pretty elegant. The pdf’s b/w-artwork is nice, original and bonkers. The map of the complex by Glynn Seal is absolutely excellent – no player-friendly, key-less version is included, though. The pdf has no bookmarks, which constitutes a comfort-detriment.

Venger As’Nas Satanis excursion into the candy crypts left me somewhat baffled. In all my years, I have never thought I’d be typing, seriously, a review of a module wherein you play anthropomorphized fruit, duking it out with genocidal candy folk. This feels, very much, like a LSD-hallucination of a module in the sheer outré nature of the proceedings. “What happened at the gaming session today?” “Well, I got stuck in a donut and squeezed to death.”

How do you rate this? Well, it’s pretty much a straight dungeon-crawl regarding its structure. I can also say that this is by far the best module wherein you defeat evil anthropomorphized candy people I have read to this date. This is EXTREMELY WEIRD AND GONZO. And know what? I like it. If you strip away the weird, the module is nothing groundbreaking, but oh boy did I laugh my behind off! The rules-language aspects could be slightly more precise here and there, but that does not change that this module is more entertaining than it has, structure-wise, any right to be. Considering the pretty fair price-point, I feel justified in rating this 4.5 stars. And while I, as a person, had more fun with this than with comparable, brief dungeons and believe that wonky, bat-shit crazy stuff should be supported, the module’s structure etc. is nothing mind-boggling beyond the premise. Hence, the reviewer in me demands that I round down for my official verdict.

Need something mega-gonzo? Look no further.

You can get this inexpensive, gonzo module here on OBS!