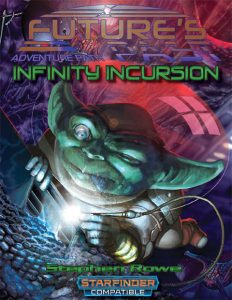 The fourth part of the Future’s Past AP clocks in at 26 pages, 1 page front cover, 1 page editorial/ToC, 1 page advertisement, 1 page SRD, 1 page back cover, leaving us with 21 pages of content, so let’s take a look!

As before with the series, please do not be fooled by the page-count – there is more (and better) gaming in Future’s Past installments than in many books of more than thrice that size. Edge station’s map is included in a player-friendly, full-color map. This module needs to be played as a sequel to part III of the AP, due to the unique nature of this series; unlike many APs, this really doesn’t work as a stand-alone module. That being said, no other AP has genuinely made me feel shudders running down my spine from excitement as often as this one has so far, so let’s see if part IV can maintain this ridiculously high standard.

Please do note that, in my review of this adventure, I necessarily have to use SPOILERS, some of which pertain to previous installments of the series. I STRONGLY suggest that, if you’re a Starfinder-player (or one for another rules-system who loves intelligent stories!), you skip ahead to the conclusion.

Again, this is the huge SPOILER-warning. You have been warned!

Only GMs around? Great! Central has won. The AI is a deity that transcends timelines, a perfect overlord, a thing that has broken free will and society throughout most of the cosmos. Some survivors and resistances still struggle with the Druune to beat it – but ultimately, it’s not enough. Time and time again, the time-travelers lose to Central in infinite iterations. Throughout infinite timelines, there was but a single instance where the unbeatable machine god lost, was reduced to base improvisation. Edge Station.

The PCs are trapped on Edge Station in a time loop, still occupying the possessed bodies of scientists and soldiers; they know Central comes to destroy them, as it has for countless times; at the end of First Contact, a strange message arrives from Queen Deshekh, a cybernetic formian – a change in the loop.

According to historical records, Edge Station blew up due to a freak malfunction in the fusion reactor; the Druune could not understand Central AI and how important Edge Station was to it – and thus, the 4 time travelers that arrive pursue desperate and wide-ranging plans. All of these plans are doomed to fail without the PCs. They are, though, a perfect example of fantastic NPC-writing. All of the NPCs come btw. with their own original full-color artworks of absolutely superb quality.

So, let’s talk about the NPCs: Queen Deshekh is no queen. To quote her text: “Central considered the elimination of the formian species the model of efficiency.” Central eliminated all queens simultaneously, which pretty much drove the entire species insane; Deshekh then transformed some of her dead hive-brethren into cybernetic zombies, to help keep her sane in the absence of her species’ telepathic chattering. Since then, her ailing body becomes more and more like a cyber-zombie herself. Deshekh is supposed to take control of the security systems and analyze any traps or tricks left by Central – she also is desperate to warn her people, seeking to boost her cybernetics to issue a warning scream. She is not aware of Central’s in-bound fleet, and spread too thin.

Vincent Sharsone was a programming prodigy working on Central – and he realized its danger…but when he did, it was too late. Central wrecked his life, and in the future, none of the nodes can truly be accessed – so it’s here that Vincent acts. He wants to overwrite a node with a copy of his mind, which will destroy his brain, but it might create an AI that can potentially go toe to toe with Central.

Oroseen the changer is a mystic of maraquoi stock, bonded symbiotically with the Druune, made  a changer, a being capable of switching between the species’ numerous sexes. Oroseen is torn between the host and Druune personality, and seeks to share knowledge with the Druune by mind linking with the dimensional gates. Sure, this’ll cause worsening rift flares, but well…

Finally, there is Timetech Gamble, the fellow on the cover (and yes: cover-art quality = interior art quality!) – you see, when Central took control it was the space goblins that kept the Federation alive – and who managed to perfect time travel! Gamble is the sole traveler who has no ulterior motive: The space goblin prodigy lady has one task: Build a time-machine. In only a day or two.

This is also a GREAT point to note that the module explains not only the time travel employed by Central, but also this distinctly…goblin-like approach of timetechs to time travel. Okay, so far for the cast of illustrious characters – now, let’s talk about the rules!

You see, the PCs had infinite iterations atop Edge Station – they are adjusted to their bodies, and each PC has a FLAWLESS understanding of every nook and cranny of Edge Station. This includes being able to maneuver through it blindly with only very minor penalties. The PCs also know where to gain equipment. The module takes place, structurally, in 4 steps, and after each step, the PC can gain equipment of an item level of 4 or less; 5 or 6 item level takes 2 such encounters, and item level 7 takes until all are completed. The PCs also know perfectly how the other people aboard Edge Station tick, which gives them a huge edge (haha) in social interactions. From computer familiarity to researched topics, etc. In short: The PCs get to be the blasé loopers that know all the stuff, which can be a fantastic roleplaying experience. Best of all: They will NEED this type edge. None of the time travelers are per se necessarily cooperative, and after encountering one, the timeline progresses in 4 steps – without help, the individuals will greatly worsen the situation: From hostile security systems to failing life support and rift radiation flares, PCs will have a HARD time dealing with these fellows…which is why the extensive troubleshooting provided is super helpful!

Did your PCs manage to eliminate the node? Module accounts for that. Do they split the party? The module actually encourages that, and while tough, it is a valid scenario! Successfully aiding the time travelers will bring serious boons to the PCs, like a functional node, and they’ll need them in the finale!

You see, Central never had to excessively use time travel, as a single projection was already the definition of overkill. Lacking the curiosity of organic life, it never tested time travel’s limitations, and the copying of consciousnesses is not an error-free process – and an AI suffers from such errors compounding…and there is a small, but non-zero chance that projections into this time might cause catastrophic malfunctions. Such a risk is unacceptable; plans would need to be altered, perhaps for the first time. The God-AI is vulnerable – perhaps for the first and last time. All that now remains, is to triumph against impossible odds.

BAM, and that is how you tease an AP-finale! I paraphrased it, but boy, the writing. It’s just so AWESOME.

Editing is very good on a rules-language level; on a formal level, I noticed a few minor typos and a couple of formatting snafus, such as missed italics for spell-references, a “P” missing from[Progression] and the like – but nothing that would have impeded the functionality of the module. Thomas Baumbach’s 2-column layout for the series is perfect and feels appropriate, and makes information easy to parse. The full-color original artworks by Leonard O’Grady are top-tier and frickin’ GORGEOUS – the interior art in on par with the cover! Cartography is full-color as well, and player-friendly maps are included. The pdf comes fully bookmarked for your convenience.  I own the softcover version, because, frankly, if you even remotely like Starfinder or any roleplaying game in space, then you owe to yourself to get this.

Stephen Rowe is ridiculously talented; not just as a designer, but also as a writer. The Future’s Past AP began strong, and has since only ramped up the tension, the stakes. I have never before seen either time travel, or dealing with a godlike adversary, done so intelligently, so well.

After part II, I was waiting with baited breath, hoping that the AP would live up to my, at this point, ridiculously high expectations, that it would manage to retain its internal logic, its persistent class. Well, part III exceeded my expectations, throwing a HUGE curve-ball of jamais-vu and awesomeness at the players and GM, and part IV further builds on this, once more delivering something you haven’t ever played in a module before.

Future’s Past’s fourth installment stands alongside its predecessors as a singularly-compelling, phenomenal achievement of adventure-writing, and if the finale doesn’t drop the ball big time, this will enter my roleplaying game collection as one of the singularly best adventure-series I own. If you have been hesitant so far, stop reading and get this series now. If you wanted your scifi/science-fantasy to be intelligent, high-stakes and awesome, if you want to experience something new at the table – Future’s Past delivers. I consider this series to be good enough to warrant converting to Traveller, Stars Without Numbers, Mothership, or similar games. It’s that good.

The fourth part gets 5 stars + my seal of approval, and, like ALL three installments before it, gets the nomination for my Top Ten, here of 2019. If Part V holds up, this series will be a hot contender for my number 1 spot.

See you at Tomorrow’s End, the furious finale!

You can get this inspired adventure here on OBS!

Missed Part I? It can be found here!

Part III can be found here!