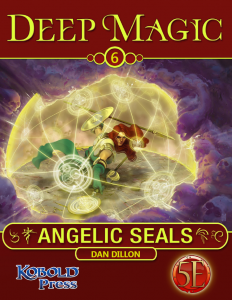 This installment of Kobold Press’ 5e-series of magic traditions clocks in at 11 pages, 1 page front cover, 1 page editorial, 1 page SRD, 1 page back cover, leaving us with 7 pages of content, so let’s take a look!

All right, so, as always, we get feats to interact with the spellcasting tradition – here, the first would be Heavenly Scribe, which nets the Celestial language and an angelic seal of the character’s choice, with Int as governing attribute for the saving throw DC. Heaven’s Chosen, the second feat, nets you a second saving throw when you fail one – this one is rolled with a single d20, regardless of advantage or disadvantage, with the ability recharging upon completing a long rest.

As in previous installments, it is pretty much recommended that characters don’t get universal access to the respective material herein – beyond the feat granting limited dabbling access, we have the Angelic Scribe arcane tradition, which halves time and gold spent on copying these spells in the spellbook and allows for one of the 2 spells to be gained on a level-up to be an angelic spell. 2nd level yields also the Celestial language and the ability to scribe the eponymous angelic seals, which may be scribed on paper, canvas, stone or other tokens that may be carried or displayed -this takes 10 minutes. Alternatively, 8 hours may be spent to create a permanent seal with artisan’s tools on a harder surface. Activation of a seal in an action.

However, before you ask – no, you cannot cheese this. You have a hard cap of a maximum of one seal active at any given time, which increases by +1 active seal at 6th, 10th and 14th level. At these levels, you also gain an additional seal and may replace an old one with a new seal. Deactivating a seal can be done as a bonus action. Broken or defaced seals similarly immediately deactivate. A given creature can only benefit from one seal at any given time and concentration on a spell or similar effect suppresses the seal temporarily, thus preventing stacking. And yep, suppressed seals are still treated as activated, so no cheesing there either.

Starting at 6th level, you gain Warding Seals, which must be attached to the floor or a similarly solid surface – as a touch, you can activate it and generate a spherical barrier that requires concentration to maintain – aberrations, fey, fiends and undead cannot physically cross the threshold, unless they succeed a Charisma save versus your spell save DC, and yes, they may retry, though they get disadvantage when being able to see the seal. Say it all with me: “YOU SHALL NOT PASS!” …sorry. I know. It’s old. Hope that still got a chuckle out of someone out there. Additionally, creatures carrying an angelic seal you can see while maintaining the warding seal can benefit from your powers: You may impose disadvantage as a reaction on an attack against a creature thus protected.

Starting at 10th level, the tradition gains greater seal, which lets you spend an action to activate the greater seal benefit for an angelic seal for 1 minute, replacing the seal’s default benefit. If you instead choose a warding seal, it instead inflicts 6d6 radiant damage to creatures failing the save to breach them for 1 hour. The ability may be used twice, and is recharged upon completing a short or long rest. 14th level yields Angelic Wrath, adding conjure celestial to the spellbook. As a bonus action, usable once per short or long rest interval, you can grant all targets with active angelic seals a bonus of +1d8 radiant damage to their weapon attacks. This should make archers really happy.

Okay, but what do the seals do? Well, first of all, 10 seals are provided, which also sport really nice visual representations of the respective seal – kudos there, it adds a sense of occult legitimacy to the material. This is also underlined by an angel’s name showing up behind the seal – “In the name of Chamule, I invoke judgment!” It’s a small thing, but for me, it adds seriously to the appeal of the pdf. Anyways, we have retries for failed attempts to improve attitudes and the greater use of charming a creature on a failed Wisdom saving throw. Spell save DC is btw. usually the DC employed. Another seal adds 1/2 Intelligence modifier to Wisdom (insight) and Wisdom (Perception), with the greater seal providing blindsight 10 feet.

Using the reaction to boost AC against an attack and gaining resistance to nonmagical physical damage types in the greater seal, the abilities are pretty cool. That being said, e.g. Glory can be kitten’d somewhat – it yields Int-mod temporary hit points upon killing an enemy. Hand me that kitten to slaughter between encounters, please… Yeah, not very angelic or glorious. It can be argued that “enemy” does not include these and it’s not a significant boost, but still. On the plus-side, automatically passing the first death saving throw (requires a rest to recharge) does feel angelic, though. While, as a person, I am not a big fan of any ability that adds more than one attribute modifier to a given roll, 5e is less prone to attribute minmaxing than PFRPG, making that concern mostly aesthetic. As a whole, these should not provide problems for games in which they are used, though.

The pdf also contains 10 new spells, one for each level – from cantrip to 9th level, these would be:

Benediction, which lets a creature you concentrate upon deduct 1d4 from its next damage received. Angelic Guardian, which nets +2 AC and may be ended to roll a failed Dexterity save. Blessed Halo sheds light, nets advantage on Cha checks interacting with good creatures within the light, dispels low level darkness and also provides 10 points of healing, which you may use as an action to heal allies within the range of the light, with higher levels increasing the healing and darkness-dispelling capacities. Blades of Wrath creates a sword of pure white fire that deals 2d8 fire and 2d8 radiant damage, with aberrations, fey, fiends, undead having to succeed a Wisdom save to avoid the frightened condition. Higher levels yield increased damage output, allowing you to choose which energy type you’ll upgrade.

Deva’s Wings grant a flying speed of 60 ft. (hover) – the wings can be used as a melee weapon with 10 ft. reach, potentially knocking targets prone. Blazing Chariot is a classic and star – you conjure a blazing chariot, with magical animals that can fly and you may direct its movement instead of your own and may direct it to Dash, Disengage and Dodge as a bonus action. with actions allowing for overruns – amazing. Heavenly Crown makes you the heavenly commander: As a bonus action, make an ally capable of hearing you use its reaction to make one melee attack and move 1/2 movement rate, or vice versa. Very potent and cool. Seal of Sanctuary is basically a more powerful warding seal with more damage output, 24 hour duration and seriously wicked drawbacks for those capable of crossing into it. At 8th level, Quintessence nets an AC fixed at a minimum of 20 as well as immunity to being frightened and necrotic damage. Worse for hostiles: On a failed save while within 120 ft. of you, they are restrained by fright…though it thankfully may repeat the save and becomes immune upon shaking the effect off. Finally, the Greater Seal of Sanctuary is basically the apex of the warding seal theme – crossing into this will be like stepping into a heavenly blender for most critters.

Editing and formatting are very good, I noticed no significant issue in rules-language or formal criteria. Layout adheres to Kobold Press’ beautiful 2-column full-color standard, with artworks being a mix of awesome new and previously used art. The pdf comes fully bookmarked, in spite of its brevity -kudos!

You see, I really like Dan Dillon’s angelic supplement. The seals feel “lawful”, methodical, like tools of the angels. the touch activation if cool and has been popularized by plentiful forms of media (like Supernatural) and the respective options fit – the potent defensive tricks make pretty clear how the angelic host can withstand the assault of the abyssal hordes. The seals and how they work makes sense to me, in spite of the brevity of their presentation.

Which brings me to my primary and only real gripe with the material herein: Honestly, I wished this had a bit of fluff. Not much, just a paragraph or two for the seals. I know, I know – this is a crunch book, retain wide open nature, etc. – but the seals very much feel like they belong to a flavorful tradition and getting some more knowledge about them and the angels would have been the icing on the cake. Similarly, I would have loved to see special seals requiring certain materials or set-ups…the engine can carry a whole lot more than what it does, but that may very well show up in a sequel. Hopefully. Anyways, this should not dissuade you from checking out this pdf – we have a winner on our hands here, well worth a final verdict of 5 stars, just short of my seal of approval.