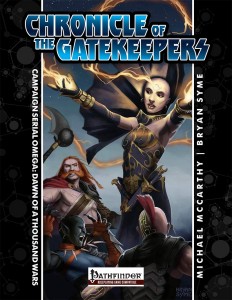 The final adventure in the Chronicle of the Gatekeepers Campaign Serial clocks in at 22 pages, 1 page front cover, 1 page editorial, 1 page SRD, 1 page back cover, leaving us with 18 pages of content, so let’s take a look, shall we?

Now if you want to know what happens if the PCs did not play all the sidetrek and thus have not yet reached the required 4th level of this module…well, the book already hints at what to expect from “Crisis of the World-Eater,” as a handy sidebox provides suggested fluff-only adversaries from diverse worlds to be inserted after the first encounter of the module: Whether drow from AAW Games’ Aventyr, Puppeteer-ridden humanoids from Dreamscarred Press’ Third Dawn, leather-clad ladies from Legendary Games’ Hypercorps 2099, goblin firestarters from Rogue Genius Games’ Veranthea or ghouls from LPJ Design’s Obsidian Apocalypse – there is some serious diversity here regarding the suggested adversaries to bridge the XP-gap.

All right, still here? Great! Atlantis folly and hubris are well-documented in the myths we weave o earth – struck down by a cataclysm of deific proportions, the Atlanteans drew back from the worlds and their nexus gateways – until recently, when the Deltans, former colonists, re-established contact to save their home world from the forces of Entropy. Bringing Atlantean weapons to bear, the inexorable advance was slowed, but not stopped. Where Atlantis fell into fatalism, the vespans didn’t – and thus, Sodan took control of the legendary city and sent forth legions to scour the worlds for something to save Delta. He found what he was looking for on NeoEoxdus, in the guise of the rather unpleasant animancer Pushae, whom the PCs hunted back in module alpha. Thanks to the work done in the previous sidetreks, the PCs and their mentor Large-Biter can finally narrow down the activity of the Vespan’s to one particular gateway – and beyond that lies the answer to their questions – stepping through the portal with the nexus key (or not, if you want to reiterate the cool portal activation in “Speaking the Same Language”, the PCs arrive in the buffer – where a Comozant Wyrd awaits – and after this line of defense, there lies Atlantis.

The beautifully mapped (player-friendly, btw.) city then constitutes the backdrop for the PC’s further investigations – and if visitors from hundreds of worlds were not ample clue, then the Vespan patrols will be: They better be low key. Alas, unfortunately news travels fast, even in Atlantis – hence, the module tracks PC notoriety, with certain special encounters happening upon PCs crossing a certain threshold. It should be noted that multiple skills and degrees of success are featured here for a pretty fine-grained investigation, particularly for a module of this one’s brevity – bravo! Indeed, finding Pushae may go both ways – with either the PCs finding the animancer or him coming after them – still, exploring the wondrous vista while laying low does have its appeal in either way. Sooner or later, the PCs will have to venture forth to Old Atlantis and the soul crucible there. And exploring the place does reveal some terrible truths: Beyond the scrupulous guards and assistants, traps and people stripped of their souls do not bode well as the PCs explore this fully mapped mini-dungeon (including a player-friendly version, just fyi!) – and finally, the PCs will be face to face with Pushae inside his Soul Crucible. Interesting here: Pushae is a powerful foe, but as a researcher convinced of the necessity of his work, he is thankfully underprepared for the PCs.

The module does not end here, though: As Pushae’s own soul is consumed by his crucible, Sodan and his vespans enter the building, telepathically contact the PCs…and make clear that they just literally stuck their faces in the wasp’s nest: From here on out, the PCs will be hard-pressed to run…fast…and hopefully, to the artillery range…to sink Atlantis! As legions of vespans assault the PCs, they’ll have high-powered atlantean siege-weaponry at their disposal to mow down scores of attacking foes while the Obliteration cannon charges – 10 rounds. Believe me when I’m saying that 10 rounds can be a nail-biting experience. It should be noted that this encounter is not run as a siege-weapon combat, but rather as a mini-game – a welcome change of pace in this instance…and yes, notoriety also features in how quick Sodan can muster his troupes…

Soon after Atlantis’ hull is breached, its final defense mechanism kicks in – and the city warps to NeoExodus, stranding on the planet! Let’s hope that the PCs can escape in the chaos…but this is not yet the end of either the story of the pdf: 12 hook allow for further customization and the pdf ends with a brief gazetteer of Atlantis, fully depicted Atlantean siege engines (like miniguns and tesla lances) as well as magic items and stats for the no-longer fully human CR 6 Atlanteans and the powers – which includes a domination aura that does look a bit like Khaynite tricks to me…but we’ll see.

Editing and formatting are very good, I noticed no glaring glitches (apart from one instance mentioning “Hypernet 2099”, which should be “Hypercorps 2099″…); the pdf’s layout adheres to LPJ Design’s beautiful 2-column full-color standard and the pdf’s artworks are pretty gorgeous, as is the cartography. The book comes with a second, more printer-friendly version. The pdf comes fully bookmarked for your convenience.

Michael McCarthy and Louis Porter Jr. had me curious, but ultimately skeptical regarding the end of the “Chronicle of the Gatekeepers”-serial – I wasn’t sure whether the omega-adventure could live up to the hype and anticipation generated by the previous modules, particularly after the more down-to-earth sidetreks. Then I saw the page-count and my heart just dropped. I couldn’t conceive the module living up to its ambitious premise and title in so few pages. Well, I’m glad to report that the omega adventure of “Chronicle of the Gatekeepers” is a fast-paced, exciting action-romp par excellence: Partway infiltration/espionage, partway full-blown action-movie escalation, this trip to the legendary city is not only well-structured, it is downright cinematic and bombastic in its concepts and settings – most AP-ending adventures do not manage to evoke such a palpable sense of high stakes. At the same time, the module does have one “flaw”, if you will: Due to its brevity, the legendary city explored in this book does not get *that much* space to shine, when it, by concept alone, could have carried an epic 100+ page plot of a mega-adventure. Oh well, GMs can add to this unique location, so if you’re like me and excited for this…well, there you go.

The furious finale, with its alteration and reveal of one damn cool addition to NeoExodus’ metaplot made me conclude this module with a palpable sense of gravitas and foreboding, but also with a lot of excitement and anticipation for the world-spanning “Crisis of the World-Eater.” Oh, and the unique finale’s mini-game is, in the hands of a capable GM something players will keep talking about for years to come. Beyond being a very good module, this also constitutes, in my opinion, Michael McCarthy’s best module so far and a worthy conclusion of a series that saw me skeptical and managed to win me over via the diverse, unique challenges offered – in short, a final module for the serial well worth a final verdict of 5 stars + seal of approval.

You can get this awesome finale for the campaign serial here on OBS!