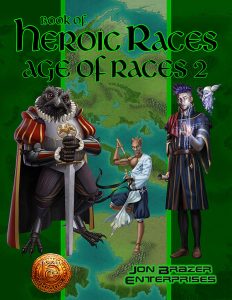 This book of races clocks in at 17 pages, 1 page front cover, 1 page editorial,1  page advertisement,1  page SRD, 1 page back cover, leaving us with 12 pages of content, so let’s take a look!

So, structurally, this book contains 5 new races, with each race receiving between 2 and 3 pages of information, which include physical descriptions, notes on the society of the respective race (including how they handle age and death, love and mating, communities and settlements, languages and nomenclature), and these races also note the interactions with the Icons. Each race gets one stunning artwork, and 1 to 2 additional ones that are slightly more comic-like in style, but also neat.

Two of the new races herein are constructed beings: The first would be the androids: Androids rarely congregate in communities, and, well, being androids, their perspectives on love and magic are interesting. Both Shadow Prince and Archmage are intrigued by them, while the Dwarf King remains conflicted; the Great Druid, no surprise, is not a big fan of the species. Mechanically, they receive their choice of +2 to Dexterity or Intelligence, and the Nanomachines racial power, which can be activated as a move action once per battle. Doing so lets the android roll the next d20 roll twice and take the better result. With a champion feat, the nanomachines are now used as a quick action. Due to the global substitute downward rule of 13th Age, this works.

The second construct race would have a less pronounced science-fantasy angle: The Geppettoans. The race’s name makes it obvious: We have the wooden Pinocchio-style race. Originally created by a fair and kind-hearted man, the design to create these intelligent servitors was quickly abused…until the race broke free. As a result, the Archmage is not a fan of these rebellious constructed beings – a fact that makes hem potential allies to the Lich Queen. The Great Druid isn’t as opposed to the geppettoans as to e.g. Androids, and the Orc Warlord would love to have the secret to create them. Mechanically, geppettoans   get to choose +2 to Dexterity or Intelligence and gain the alchemical resilience racial power: On your first rally per combat, you heal 1.5 times the average amount of your recovery dice rolled, before applying Constitution modifier. A handy example illustrates how to calculate this. With a champion feat, you triple Con modifier when adding it to your recovery hit points attained from the first rally in a combat, which is upgraded to quadrupled at Epic tier.

Both construct race *may*, subject to the GM’s discretion, benefit from alternate rules regarding constructed races: These optional modifications are designed to enhance how different they feel: Constructs under these rules don’t eat, drink, sleep or breathe, but still require rest. They are thus immune to the sleep spell (italics missing; same goes for other spell-references in this section), but e.g. cure wounds and similar cleric spells is halved. Potions can heal constructs to the full extent. Additionally, all constructed races have resistance 12+ to holy, negative and poison damage, but pay for these with a vulnerability. We get suggestions for these: Androids don’t deal well with lightning damage, forgeborn are vulnerable to psychic damage, and geppettoans are, well, flammable and thus vulnerable to fire damage. I enjoy rules like these that serve to further differentiate races in 13th Age, and having this presented as both optional, and with drawbacks for both new features also lets you pick and choose: If you only want the vulnerability angle, you can ditch the ability regarding no eating, drinking, etc. without altering the balance of the package. Nice.

Beyond these constructed races, we have the Gillfolk free of their erstwhile masters (Aboleths are contextualized as Abyssal, fyi), and as such, opposed to Diabolist; the relationships with the other Icons are rather nuanced and interesting here. A warlike people, the Gillfok here reminded me less of the traditional Lovecraftian angle, and more of the subjects of e.g. Aquaman (or Prince Nemo, if you prefer Marvel); they can choose +2 to either Constitution or Charisma, and can fight as well in water as in open air. They can breathe water well, but must fully submerge themselves in salt water every 3 days or die. Their racial power is aberrant resistance, which lets you once per battle roll a save against an ability or spell twice and take the better result. However, the first save against an ability or spell against a monster of the aberration type automatically fails. OUCH! This looks brutal, and it is – but it also is interesting from a narrative perspective and contextualizes the struggle of the race: When you auto-fail against the save-or-perish-level magics of your masters, rising up in revolution has serious stakes. It’s a small thing, but I really like it. The champion feat upgrade alternatively lets you choose to get a +5 bonus, which lets you automatically succeed on Easy saves. Additionally, you no longer autofail the first save as noted above, but instead need to roll twice, taking the worse result.

The moonblooded are essentially a playable lycanthrope race (minus the whole curse angle), though their flavor contextualizes them as subject to demonic possession due to their bestial abilities. Moonblooded gain +2 Wisdom and the change shape racial power, which can be sued as a standard action once per battle. In this form, you increase one of your physical ability scores of your choice by +2, and increase unarmed melee attack damage to that or a two-handed, light, or simple weapon for your class – unless your unarmed damage would be better (such as if you’re a monk), in which case you use that. The champion feat lets you change as a move action and the unared attack benefit from two-weapon fighting. I have a tiny nitpick here: RAW, the moonblooded can’t choose to revert to non-bestial form, which might be intentional, or an oversight, but I can picture some instances where the player might wish to prematurely revert before the combat ends (such as when witnesses/guards/etc. approach…). Then again, this is easy enough to upgrade with a feat.

The final race contained herein would be an old favorite of mine, the tengu, who are most commonly found in service to the Shadow Prince; they a rather detailed look at their culture, which belnds a reputation for being greedy opportunists with a surprising aptitude for arts and crafts…and, obviously, swordsmanship. Tengus get to choose either +2 to Dexterity or Wisdom, and their racial power is opportunist: Once per battle as a free action when a nearby enemy rolls a natural 1—5 on an attack or save, you get either a basic melee attack at half damage, or steal an item they are not holding…but the target ALWAYS knows if you steal this way. I LOVE this ability. It screams cinematic combat to me, as seen in many a comic: You know, the immortal, super-powerful villain pummels his enemies, invulnerable…and then, suddenly, the trickster character pops up, has the item…and the tide of battle turns. This is very much awesome. The champion feat upgrade makes this ability work on enemies’ natural 1s without expending it, and attacks executed as a result with sword-like weapons (yes, that’s defined) deal full damage. If you steal, the target no longer automatically knows it; they now need to make a normal save.

Editing and formatting are very good on a formal and rules-language level; apart from a few cosmetic and minor hiccups, I noticed no issues. Layout adheres to the series’ standard, with green stripes on top and bottom, and the artworks deserve special mention: The prestige artwork that accompanies each race is really nice. The pdf comes fully bookmarked with nested bookmarks for your convenience.

Joel Flank, Dale C. McCoy Jr., Richard Moore, Kevin Morris and David N. Ross deliver a really nice supplement here. In spite of the limited design space afforded by 13th Age’s races, the individual write-ups manage to achieve meaningful differentiation between each of the races. Personally, I was most fond of the rather courageous take on the gillfolk, as well as by the tengus’ very cinematic racial power. When a power could easily act as a catalyst for an epic battle, I’m all for it. When all’s said and done, I consider this to be a worthwhile addition to the arsenal of 13th Age gaming groups. My verdict is 5 stars.

You can get this well-wrought little pdf of exotic races here on OBS!

if you enjoy my reviews, please consider leaving a tip via paypal, or joining my patreon here. Thank you.