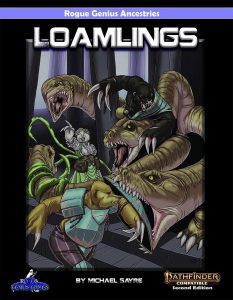 This pdf clocks in at 9 pages, 1 page front cover, 1 page editorial, 1 page SRD, leaving us with 6 pages of content, so let’s take a look!

So, want to play a character who is down to earth, but not a halfling? Someone who is (bad pun incoming), real “salt of the earth”? And you’d like to play something weird, a race you haven’t played in another d20-based game? Well, I’ve got something here for you! Loamlings! Kindly and patient mole people! Wait, that didn’t come out right. I’m not talking about the mole people as per the traditions of superhero comics and weird fiction, but of literal, anthropomorphized moles.

This uncommon ancestry is Small, gets 8 HO, has a speed of 20 ft. (and burrow speed 10 ft.), and the ability boosts go to Constitution and Wisdom, with the third being free; the ability flaw is assigned to Dexterity. Starting languages are Common and Sylvan, and loamling claws grant them an unarmed attack at 1d4 slashing damage, with the agile and finesse traits, which is treated as in the brawling group. The burrow speed applies to sand, soil, snow, etc., and you get to choose whether the tunnel collapses or stays open; if it stays open, Small or smaller creatures and Medium creatures that Squeeze, can Crawl through. Collapsing the tunnel behind you runs potentially the risk of suffocation, and scent-based perception is reduced to 20 ft., but you create enough of a disturbance to still allow others to follow you. Loamlings have a scent-based perception and only see clearly up to 10 ft., with 60 ft. scent as a precise sense – and yes, this does allow for the targeting of spells. However, you are immune to gaze attacks and visual effects unless they originate from within 10 ft. Anything outside that range, and you’re blinded to it.

This is a pretty epic and complex change of pace: On the one hand, we have a rather severe and meaningful incision into how the ancestry places, but one that is counteracted by some seriously powerful benefits that have a ton of narrative potential. Can you see, öhm, I meant “smell” the basilisk shepherds? I sure as heck can!

The pdf provides 4 different heritages: Blufflings get better claws, with 1d6 slashing claws that also have the versatile (piercing) trait; darklings get 90 ft. precise scent (30 ft. while burrowing) and can smell incorporeal creatures. Fieldlings decrease the effects of environmental heat by one step and gain Natural Medicine (I appreciate that, having worked on fields in some summer during my youth…), and finally, rootlings get Combat Climber, and when you succeed on an Athletics check made to Climb, you get a critical success instead. You also need only one piece of fresh fruit to stay hydrated and fed for a week.

The pdf provides 6 ancestry feats for first level characters: Here we have talking to burrowing creatures, a feat for being so cute that you gain Shameless Request (and +1 for Deception-based initiative rolls), one that nets you trained proficiency rank in Nature and Survival, as well as Loamling Lore. Loamling Weapon Familiarity nets training in hatchet, light pick and pick, as well as access to all uncommon gnome weapons, with martial gnome weapons treated as simple, advanced gnome weapons as martial. So yeah, you get hook hammers and my beloved flickmaces. One of the level 5 feats nets the respective critical specialization effect, building on that. At level 13, when you gain expert or greater proficiency in a weapon, you also extend that to the loamling/gnome weapons…but I’m getting ahead of myself.

Another feat upgrades claw damage to 1d6, or if you are a buffling, 1d8 + deadly d8 trait – ouch! You don’t want to mess with those claws. There also is a reaction-based feat, Hit the Dirt!, which can be triggered while touching ground and hit by an attack that deals your level or more damage, whereupon you take the damage and then dig straight down by your burrow speed. This is a very potent tactical trick if executed properly.

5 ancestry feats for level 5 are provided: building on aforementioned claw-improvement feat, we have the option to apply the unarmed attack’s critical specialization; another feat lets you automatically Cover Tracks while burrowing, including full speed while Avoiding Notice etc. while burrowing. I can smell the smuggling plot. Speaking of which: Detect magic as a primal innate spell at will, automatically heightened to a spell level equal to half class level, rounded up. Sounds cool, right? Also comes with +2 circumstance bonus to disbelieve illusions that do not include smell or olfactory stuff.

The 3 level 9 feats include burrow speed upgrade to 20 ft., half your level Hardness during the round you emerge from the earth (Dirt Armor), and the ability to use earth to Raise Shield a one-use Shield Block shield of earth. I really like this one, and wished it had been, in a modified version, available sooner. Really cool!

The remaining 2 (talked about one before) level 13 feats include not having your scent-based sight reduced while burrowing, and another feat enhances both Soil Shield and Dirt Armor. At level 17, we have a 1/day summon elemental heightened to 8th level, earth elemental only. True Scent lets you sniff through illusions, and potentially discern the truth behind polymorph and similar effects. Finally, we have another upgrade for Dirt Armor, which no longer falls apart after 1 round, instead lasting until you lose half HP or are critically hit. While you’re at lower than half maximum HP, the Dirt Armor is less effective.

These rules are all supplemented with proper and rather well-written prose that outlines the ancestry properly.

Editing and formatting are very good on a formal and rules-language level; I encountered no serious hiccups. Layout adheres to a 2-column full-color standard, with quite a few original pieces of Jacob Blackmon’s artworks. The pdf has no bookmarks, but at this length doesn’t exactly require them.

Michael Sayre’s loamlings are an interesting sight (pun intended), in that they offer a variety of different tactical options that are truly novel and unique; powerful, yes, but also limited in an intriguing and rather creative manner that significantly influence how the race plays, for good and ill. This is the type of design-paradigm I enjoy seeing.

That being said, there is one thing that needs to be noted, and that would be that a player-race with such a burrow focus requires a bit more consideration on part of the GM. While dungeons can’t usually be burrowed apart by loamlings, e.g. smuggling, burrowing in cities and similar scenarios might require some consideration. In an ideal world, some guidance for handling warfare with e.g. loamling sappers, buildings made less stable, etc. would have been awesome to see, because that sort of thing is inevitably where my mind goes. Additional magical detection and protection versus burrowing intruders in the form of magic items, rituals or spells would also have been nice to see, but then again, all of that would have significantly increased the page-count of this supplement. Still, as a GM, I think the race would have been easier to implement with a few supplementary pieces of information and (mechanical) guidance. I also think that the influence of e.g. (magical) perfumes or particularly bad smells, scentblocking effects and how the loamlings perceive the world is a treasure trove that can (hopefully) still be explored in an interesting manner in future publications. Within its limited frame, this pdf does its job very well, but left me wanting more.

As such, my final verdict remains at a heartfelt recommendation of 5 stars, just short of my seal of approval.

You can get this cool ancestry here on OBS!

If you consider my reviews to be useful, I’d appreciate a tip via paypal, or joining my patreon. Thank you!