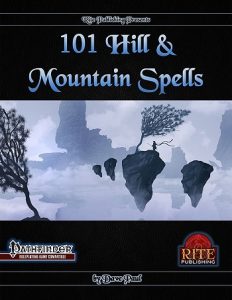 This collection of spells clocks in at a massive 52 pages, 1 page front cover, 1 page editorial, 1 page SRD, 2 pages of advertisement, leaving us with a massive 47 pages of content, so let’s take a look!

Okay, so, as has become the tradition with these books, we begin with a general introduction before we get the spell-lists; as always in Dave Paul’s spell-books, the respective environment has a significant impact on the respective mechanics, potentially changing the effects of the spell in question. In this installment, a leitmotif suffusing the spells would be the hybrid nature of hills, serving as a bridge between the wilderness and the civilized realms; as a whole, this duality and focus on the environment is pronounced.

Spell-list-wise, the classic classes, including the APG classes and magus are covered and bloodrager and shaman receive their own spell-lists as well. At least for now, the pdf does not directly provide support for the occult classes.

Now, let us take a look at the spells, all right? We begin with interesting spells, as they take a mechanically relevant stab at depicting altitude sickness and the means to counter it; beyond their mechanical ramifications, the spells have interesting operations done. The save DC for aforementioned spell is increased if the material component is taken from a sufficiently high mountain…which is simple, elegant and just awesome.

The series has been pushing the boundaries of spellcasting and what you can do with it – and so it should come as no surprise that there are spells in this pdf that are hard to judge in terms of their potency: Amphisbaenic caster, to name one prominent example: As a level 7 spell, it allows you to split into your own self and a shadowy duplicate. Yes, we’ve seen the like before, but bear with me: The duplicate actually has a significant array of options – it’s not just an image, it acts like you do; spells are evenly distributed among the two and while the duplicate’s effects cause less damage than the real caster’s powers, the doubling of actions this entails is impressive and very powerful. It should be noted that the spell features several peculiarities that render it exceptional in the level of precision, but also make it slightly uncommon. The damage-decrease of the duplicate is, for example, an inverse take on usual shadow-themed spells: Where usually, such spells are only 20% real, here, the reduction of damage caused is subject to percentile effects. I am not against such effects, though it is slightly uncommon to employ such mechanics. Beyond that, the spell actually works better for casters with certain patrons or bloodlines, which is something I most definitely appreciate. The dual action mechanic is similarly precisely codified…and still, I’d call OP on this spell, were it not for significant risks involved with perished doubles, making this spell an option casters won’t want to spam all the time. This balancing mechanism makes it actually work out – sure, it’s a spell that requires some preparation by the player, but when employed, it is impressive indeed.

Speaking of balancing – the pdf is interesting in that spells like argentine’s grace are variants of an already existing spell, increased in potency and balanced via unique, potentially story-hook worthy material components…in this spell’s case, just fyi, a silver dragon’s scale…

Of course, such variants tend to end up as the rather rare exception to the rule considering the spells otherwise found herein: Want to make your foes magnets for big boulders/avalanches or just conjure them forth to throw at foes or characters? Possible. (*cough* Giantslayer GMs, get this one */cough*)

These would, however, not even be close to the spells you actually will keep in mind when reading this book. For example, which spellcaster than reaches lofty 9th level with actually resist the temptation of smashing enemies by literally letting a mountain top fall on them? Suddenly, “rocks fall, all die” has taken on a whole new dimension. A similar trope that just about every group will probably encounter at one point or another, the spell catapult ally is simply GLORIOUS. Why? Because it actually manages to codify the complex issues pertaining action economy implied by the action, one that is VERY hard to represent in the turn-based combat system, in a compelling and airtight rules-language. And yes, it takes weight and sizes into account.

If the mechanical aspects or high-level awesomeness are not what you’re looking for, what about a low-level spell that lets you walk on clouds (long overdue!), the option to make cloud bridges or blasting cones of ash? It should be mentioned that the latter can be taken as a nice example for spell balancing and the value of secondary effects when compared to similar magic effects of the same level.

Not all of the spells are 100% perfect, though – if you look for nitpicks, tehre are a precious few to be found herein – a curse that unleashes an inner beast and devolves the target grants you bite and claw attacks – while the variable, size-based damage-values are accounted for, the spell does not specify whether the attacks are treated as primary or secondary natural attacks. Established conventions exist to make this omission a non-issue, sure, but it still would have been nice to see that specifically mentioned. An entrancing dance that compels those that succumb to it to accompany you conjures up images of Hekate-rites or the pied piper and cantrip-based infliction of light sensitivity on the target similarly makes sense.

Those of us who are into philosophy will enjoy a spell where the author’s expertise show through – the illusion deep in the cave, based on the famous allegory of the cave in Plato’s work, is genius – not only are the effects well codified, it actually manages to illustrate a complex concept easily, teaching a slightly simplified experience by the mechanics of the system. I LOVE THIS. Considering the fact that many a spellcaster in fantasy worlds is supposed to be hyper-smart, the absence of spells that illustrate complex and intriguing concepts by means of game-mechanics is something that has always galled me…so kudos…not only for the educational aspect this spell contains. While we’re at it – what about a spell that eliminates your face and renders your whole body a sensory organ…albeit a deeply unsettling one? You’ll get two cookie points from me if you can tell me the theory that one is based on!

If giant form is too generic for your tastes (and/or you need more variety for giant-themed campaigns…), variants for fire/frost giants in this book will have you covered. Transforming into nightgaunts or wyverns may be cool – but not half as cool as making floating hills or mountains. Yes. Floating mountains. Awesome. Using the pun-tastic Grimm Resistance, you can get a powerful buff versus the fey creatures. Generating a magic-powered movement to compel large amounts of people to dig for you may sound specific…but the spell is basically at least one adventure practically spelled out for you.

Tapping into the characteristics of the savage humanoids living in the hills via an array of spells would be another component of the book. Very unique: Phase runner lets you oscillate between the material and ethereal plane, becoming ethereal while moving and substantial while standing still/attacking – this sports a LOT of unique applications for tactics – and, interestingly, the spell takes mounts and vehicles and the like into account. Perhaps, you, as a high-level druid, are just fed up with the encroachment of civilization…if you are, just Raise Mountain Range. 2 square miles per level. The summon spells herein are nothing to sneeze at either – they contain actual simple templates to add at your convenience.

Oh, and to make that reference…since I’m from Germany, I need to mention this, in spite of not being the biggest fan of the whole volkstümliche Musik concept – there is a spell in here called yodel. Yes, you can reskin this one to work via smoke signs. Yes, it is kinda funny, but works. Yes, I will probably use it and require my players to actually yodel when trying to use it. Because that’s how I roll. 😉

Editing and formatting are very good, I noticed no significant glitches. Layout adheres to Rite Publishing’s two column full color standard and features some neat artworks I haven’t seen before. The pdf comes fully bookmarked for your convenience.

Dave Paul’s spells are the most anticipated spell books for Pathfinder for me; let’s not kid anyone. They’re pretty much the only spell books I truly look forward to reviewing right now. I’m mostly burned out on spells and the significant majority of spells either is a variant on something or doesn’t feel magical enough for me. Dave Paul’s spells, on the other hand, either do something mechanically interesting, breathe a sense of the wondrous, stitch shut gaps in what spells let you do, provide unique tactical options…it may sound weird, but I actually prefer his spells and variants of other spells over many an “original” spell. Why? Because even his spell variants stand out with unique rules-operations or concepts that breathe the spirit of the fantastic to an extent unrivalled by just about every comparable book. It is a boon for a lot of authors that he got into the spell-writing gig only relatively recently; otherwise many a book of magic would have received less praises from yours truly. The terrain-based 101-spell-series raises the roof for the whole concept of spells and this is no different. Evocative and unique, this is well worth 5 stars + seal of approval, with an explicit extra recommendation for fans of giants, dwarves and humanoids and classic Against the Giants/Borderlands/Giantslayer-style gameplay.

You can get this great collection of spells here on OBS!