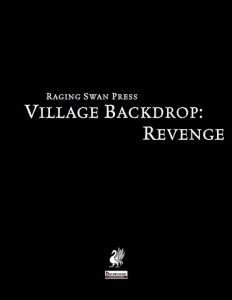 Situated none-too-far away from the pirate town of Deksport, the village of Revenge was founded by the infamous captain Tarvin Brineshadow after he was deposed by his treacherous first mate Jaska Purho – surviving the trip into shark-infested waters, he eventually got the eponymous revenge against the first mate and settled for a quieter life. He may have sunk Jaska’s ship and ended the reaver…but recently, adventurers have plundered it and disturbed the rest of the vile captain. Now, Red Jack is back…and life will become interesting for the aged captain brineshadow.

As always in village backdrops, we are introduced to the village, including statblock information, a surprisingly high danger value (+20 this time around) and some sample notable folk with fluff-centric write-ups. Information on uncommon items available at the market place and 6 whispers and rumors are included. Similarly, canny PCs can unearth lore about the village and information on local nomenclature and appearance are provided for the GM’s convenience.

The beautiful b/w-map depicts revenge as sitting around the buccaneer river, with one small ferry connecting the two halves of the village and palisades defending the halves both in the northern and southern half. In the local trading post, strange cabinets of wonders await. The captain is pretty paranoid, just fy, so talking to him will not be that simple…and he’s paranoid for a reason, for the small town hides a doom from beyond the grave waiting to claim him…a doom that arguably could render the town pretty empty if not confronted by the PCs. The pdf, as always, does feature sample events, 6 to be precise, to kick off the action., in case you’d need the like

Richard Green is a talented author; no question there. The village of Revenge is not a bad place to visit and its craftsmanship is solid. At the same times, it did not do anything for me. Deksport is more detailed, the village of Sea Bitch has a more intriguing angle…and revenge, ultimately, focuses pretty much on as cliché a storyline as you can find in pirate lore. Don’t get me wrong – to an extent, we need such tropes to work…sure. But as a backdrop for it, as far as metaplot implementation is concerned, the very name of the place acts as a spoiler. PCs are bound to ask what’s up with it; they’ll hear the story. They’ll expect what happens next…and when it does, no one will be surprised or particularly excited. Apart from its structure, this place simply doesn’t have much going for it, as loathe as I’m to say it.

The village is pretty much defined by its metaplot and that one is as standard as it gets; Some additional intriguing features and more room for creativity would have been a blessing here. In a series defined mostly by unique and evocative places, revenge’s shortcomings show all the more. Don’t get me wrong – this is not a bad supplement. If you’re adventuring in the Deksport region or just need a generic village with a nice map to introduce, this will do the trick just fine. Just don’t expect to be blown out of the water (haha) by it. My final verdict will clock in at 3 stars.