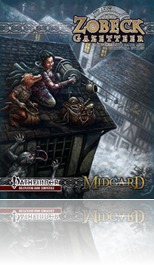 This pdf from Open Design is 117 pages long, 1 page front cover, 2 pages editorial/SRD, 1 page ToC and 1 page back cover, leaving 112 pages of content, so let’s check this out!

This pdf consists of a gazetteer in the truest sense – it starts with an account of the history of Zobeck, the by now famous clockwork city. From a history steeped in mystic lore and the interaction of the infamous Stross-family with the shadowfey to the recent rebellion that made a free city out of Zobeck, saw the advent of gear-forged guards and the freedom of kobold miners, the history-section of the book is written in compelling prose and provides enough fodder for campaigns aplenty alone. Current Zobeck is a vibrant city and thus, we first get an account of the city and its structures as a whole, from government, guards etc. to the unique festivals of the city. Life and culture in the city of clockworks is detailed in excruciating, vibrant detail, bringing to life one of the most iconic cities of Midgard and neighbours like Morgau and Doresh, the near Margreve and the Ironcrag dwarves will ensure that Zobeck never runs out of the need for adventurers.

Perhaps the most iconic district of Zobeck would be the Kobold Ghetto and it is detailed herein in as of yet unseen detail, including a vast variety of (often humorous) traps and hassles for the big folk to encounter. The cartways and different districts of Zobeck are covered in similar, yet not as extensive detail and their locations provide adventure hooks galore for enterprising PCs. If that still does not satisfy your locale-needs (have I mentioned the shadow-fey embassy?), the surrounding area also gets a brief glance. Of course, all these locales have to be inhabited by people and said people tend to organize – from weavers using automatic spiders to gangs, the spy-networks of the mouseking and the spyglass guild, the diabolist cloven nine and several other cabals and guilds, there are plenty potential intrigues waiting for the involvement of your PCs in tha tangled webs that are the city’s politics – and that’s before the gods, cults and religions (fully detailed, btw.) of the city come into play. It is also here, the great crab-divining of the Kariv is detailed alongside patron saints, relics, reliquaries and of course, Rava’s great oracle, which guides and protects the city’s destiny. The “Denizens of Zobeck”-chapter provides us with fully stated characters, including golden-scaled kobold paladins, the infamous mouse-king and other movers and shakers. Since Zobeck features two distinct sub-schools of magic, gear-magic and the star & shadow-school, the magic section of the gazetteer is well-developed and provides additional oomph for casting characters alongside spell-lists for the core and APG-classes, but not for the poor magus.

The pdf finally closes with a selection of magic items for your perusal, many of which deal with the shadier and unique characteristics of Zobeck.

Editing and formatting could have been better – Open Design needs to get more proofers/passes at editing, for the writing is superb, but more than once broken by easily avoidable glitches. Layout adheres to a beautiful 2-column b/w-standard in full color in the pdf. I don’t understand why the print version is b/w, though. The artwork used throughout the book is stellar and should satisfy the most discerning of purchasers and comes with a mix of abstract, grimy and clear, classic pictures, most of which are b/w. The pdf is extensively bookmarked. So this is it – my favourite city in Pathfinder gets its own gazetteer. And it’s a tantalizing read – in the positive and negative sense. On the one hand, the lecture of this book provides you with information and hooks galore. On the other hand, this information refers to a lot of other books, unfortunately including the now no longer available first Open Designs. I can’t tell you how badly I gnashed my teeth each and every time I read “See Steam & Brass” or “See Castle Shadowcrag”, the two I couldn’t as of yet get my hands on. Additionally, I now hope even more so than before for a PFRPG-conversion of “Courts of the Shadow Fey”.

Moreover, the pdf often refers to two as per the writing of this review not yet released books, the Crossroads Player’s Guide and the Midgard Bestiary, leading to further teeth-grinding, but also joyful anticipation. The writing in this book is superb and befitting of the great content Tales of Zobeck, Streets of Zobeck etc. have provided…which brings me to a major bummer, at least for me: While it is nice to have the information compiled, a lot of this book is a rehash of old material – KQ-articles, information from Tales of Zobeck (updated to PFRPG, though) and Streets/Alleys of Zobeck are heavily quoted. Especially the former two have whole slews of characters, including statblocks, just reprinted, artworks reused etc. And I don’t get why. they are written for PFRPG and freely available. Why take so much of the content from these books instead of providing new one?

Don’t get me wrong, I love AoZ/SoZ, but I would have loved to get even more new content or rephrased old one – perhaps a rule for a certain mother of gorgon’s blood-infusions or more unique cultural practices like crab-divining, something along those lines. It is due to this, at least in my opinion, slightly exaggerated recycling, that this book loses another half star. Combined with the avoidable editing glitches, we thus arrive at a final verdict of “only” 4 stars in spite of one of the best writing jobs I’ve encountered in a setting sourcebook and still a definite recommendation.

Zobeck Gazetteer is available from: