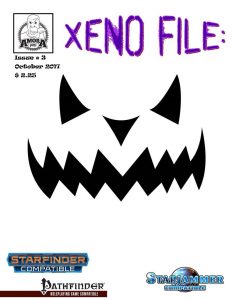 This series was requested to be moved up in my reviewing queue by my patreons.

The first article was penned by Joshua Hennington and depicts the Rendeian race, thralls to the Qlippoth lord Sesser’vatn. Racial stat wise, they get +2 Con and Wis, -2 Dex, 6 HP and are Medium humanoids with the shapechanger subtype, which represents a deviation from the standard Starfinder races. Rendeian subtype would have been standard here, but this aspect is pretty much cosmetic. Rendeians get darkvision 60 ft. and they gain a +2 racial bonus to atk and damage and saves versus non-qlippoths with an evil alignment, making them potentially uneasy allies. They also get +2 to Mysticism to glean information on the Outer Planes. They don’t need necessary ranks in Medicine to install augmentations and if they do, implantation time is halved, but only for implants for themselves, not other creatures. They also have a pretty strong adaptive physiology, which means they can either hand 15 ft. burrow speed, 20 ft. clumsy fly speed or 30 ft. climb or swim speed, which may be modified by taking a 10 minute rest that does not qualify as Stamina regaining. Potent? Yeah, but as engineered thralls, they also take a whopping -4 penalty to saves versus qlippoths. That would be the race in SFRPG.

If you prefer one of the scifi/space opera options for Pathfinder, there’s a conversion here: +2 Con and Wis, darkvision 60 ft. Rendeians are native outsiders with the shapechanger subtype (Minor quibble: line refers to Umvee instead). They get +2 to atk and saves versus non-qlippoth creatures with the evil subtype and always treat Knowledge (planes) as a class skill, gaining a +2 bonus to it. The adaptive movement rates are stronger in PFRPG, allowing the race to switch between movement modes as a full-round action that doesn’t even provoke AoOs. While the flight remains clumsy, the value of flight is higher in PFRPG, as is the value of burrow, which means that this aspect may not be for every campaigns and is something I’d look out for. More elegant would have been to start with gliding wings and upgrade them to flight at higher levels. Anyways, the save-penalty versus qlippoths is retained.

The race gets a supplemental feat, namely Rending Appendages, with benefits for both systems: In PFRPG, the feat nets an additional off-hand, in SFRPG the same applies. Weird in PFRPG: The additional appendage does not “Add addition attacks”, which isn’t how that usually works in PFRPG. That being said, the lack of higher level prerequisites means that I absolutely understand this limitation and consider it pretty much required. The feat may be taken 3 times, for additional arms or prehensile tails. I get what this does, but I’m not 100% happy with the implementation – the tails should offer different benefits than the arms, and perhaps a retooling in line with conventions of their effects would be in order.

Now, on the plus-side, we get a pretty detailed write-up for the race, adhering to SFRPG’s aesthetics: We get notes on playing them, physical descriptions, an age, height and weight table – nice! As engineered slaves, they lead short and volatile lives and, in an interesting twist, are sex-less, reproducing via a form of communal symbiosis of sort. We also learn about Rendei-5, their abyssally-blasted home planet and here, things become interesting: As hinted in the racial write-up, Rendeians are good at hunting down sinners: Well, it turns out that their culture prefers the sacrifice of “ripe” sinners, not the usual goody-two-shoes innocents! This makes them, in spite of their dark origins, a potentially interesting ally or PC-race without compromising their dark background. As servants of qlippoth masters, they seek to actually eradicate sin in the multiverse, which puts them in a hilarious twist on the same trajectory as religious zealots in their end-goals. Notes on nomenclature and adventuring rendeians are provided as well. Notes on language and 3 sample adventure hooks complement the write-up.

As masters of augmentations, rendeians get a total of 5 such augmentations: At level, there is the skinshedding implant, which lets you turn your skin transparent, potentially sickening onlookers (DC governed by Con). Cool: To offset this power, it renders you fatigued for one round afterwards and comes with a cooldown that you can pay off for immediate recharge with Resolve; otherwise, it replenishes with Stamina points. Outsider’s grasp is implanted into the hand, replacing it and clocks in at level 5, granting the hand the respective associated special weapon fusion. Metaplanar anchor is a brain implant at level 9 and lets you never be treated as extraplanar and renders you immune to alignment-based planar traits. At level 15, parasitic twin growth is both an arm and hand implant and nets you a 20% chance of having Will save-based effects instead affect the twin growth, sickening you for 2d3 rounds instead of the usual benefits. Additionally, it can act when you’re unconscious,. Through compulsions, etc. – 1 Resolve Point lets the growth act for 1 minute. Yes, it may even act when you’re dead (sans Resolve expenditure), using your bonuses. It can sustain 10 points of damage, uses your bonuses and AC, etc. Damn cool final “Hail Mary”-type of ability. The race also gets a new piece of level 2 tech, the sinscanner, which makes sense in the context of the race’s peculiarities.

All in all, I really liked the race – the SFRPG version is obviously the better one, with the conversion being slightly less impressive. Apart from the feat, I have no real complaints to field. Big kudos for an interesting, twisted race that makes sense as an evil PC even in a non-evil group!

After this one, we are introduced to the Accelerated Certification for Explorers, also known as ACE, as a cool pilot ace training company/corporation. Nice system neutral article!

The final article of the pdf deals with symbiotes, with the article written as a holo news story, making it a rather nice reading experience. Symbiotes range in size from Small to Tiny. A character can host as many symbiotes as the starting racial HP, which act as symbiote slots of sorts. Some symbiotes take more slots and symbiotes don’t stack with themselves, but benefits to the same statistic from different symbiotes o stack. Symbiotes have hit points, a life span and occupy a system slot as though an augmentation. They also have a bonding time. They also sport levels analogue to other SFRPG-components. The first would be the Adrenal tick: Roll 1d6: On a 6, it pops and dies; on subsequent days, roll a 1d6, with a cumulative -1 penalty, then compare that to a d6 roll: If your second roll exceeds the former value, the tick dies. The tick nets you a +1 morale bonus to saves vs. panicked and frightened conditions. Cearkifs allow for the temporary understanding of all languages, but can die after an hour of inconsistent speech with non-known languages. Gel clams are radioactive and can thus cause radiation poisoning, but can yield low-light vision and infrared and ultraviolet sight. Glitter spores can be massaged to spray glitter and be used as a ranged attack to blind foes nearby, who can mitigate this via a “full round action” – should be full action. I also assume this to target KAC, but clarification would be nice. Neurohedra can act as datajacks. Sum leeches can excrete a paste that nets you +2 to saves versus mind-affecting effects. I assume the massage to be a standard action, analogue to augmentation default, but I’m not sure there. Finally, Thaxion bark is interesting: The first time the host is knocked to 0 HP, it stabilizes automatically, the bark sacrificing itself to stabilize the character. It may be tricked into doing this when knocked unconscious due to nonlethal damage to remain in the fight. Okay, for how long?

Editing on a formal level could be a bit tighter – I noticed a few minor hiccups and /too/to-glitches and the like. On a rules-language level, the pdf is mostly well-crafted, though a few of the cool symbiotes could have been more precise. Layout adheres to the nice 2-column full-color standard of the series and the pdf comes with quite a few nice full-color artworks I haven’t seen before – kudos! The pdf comes fully bookmarked for your convenience.

Joshua Hennington and Greg LaRose deliver a fun, inexpensive supplement here: The race is interesting and potent, but not to the extent where I’d consider it problematic, at least in SFRPG. The PFRPG-conversion is a bit less impressive. The other articles are nice as well: While the symbiotes do suffer from a few minor hiccups in the rules, they work, are interesting, and frankly, I want more. That’s a huge untapped potential here and they, mechanically, integrate pretty easily into SFRPG’s rules. So yeah, all in all, by far the best Xeno Files pdf I have covered so far. Were it not for the hiccups and minor issues, I’d give this 5 stars. Even with them, this is well worth getting for the low and really fair asking price. My final verdict will clock in at 4 stars.

You can check out this inexpensive, neat supplement here on OBS!