Where there’s a Will (PF2) (priority review) 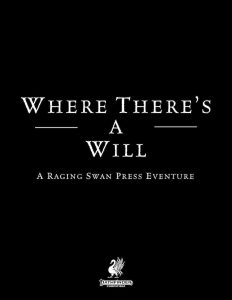 Part 3, then, would essentially be the reading of the Will in a shady pirate’s bar, so whether or not the party actually is there will depend on the morals of your group. The tavern is not mapped, and there is an additional NPC for further complications here. The celebration itself, somewhat to my chagrin, is also bereft of rules – even though knife-throwing, drinking etc. all can easily be gamified without spending a lot of words. PARTICULARLY considering PF2’s elegant engines, this would not have been hard. The “notary” does hand out maps, and then offers a quest of sort – for a legendary artifact, which, yep, does not come with stats. (Though, if you do have the 3.X-book Elder Evils, you’ll have a good idea for an end-game for it…) Much to my chagrin, the important parts, the celebration itself and the reading of the will, are totally glossed over. The latter, very volatile situation, is even relegated to a single paragraph. No, I am not kidding you. No if/then, no details…it was a serious downer for me.

Editing and formatting are very good on a formal and rules-level, the latter being no surprise, since there are next to no rules-relevant components herein. Layout adheres to Raging Swan Press’ two-column b/w-standard, and the pdf offers solid b/w-art, but no cartograph for the environments. For Part II, this is not necessarily an issue, but in Part III, it does hurt the adventure. The pdf comes in two versions, one optimized for the printer and one optimized for screen use, and the pdfs come fully bookmarked.

But the execution? It left me rather disappointed. The eventure spends a lot of time on a plethora of NPCs in Part II, and then misses actually making the capstone of the show, the will itself, interesting. Sure, the web of personalities is neat to see, but combined with the lack of concrete rules, the result  of this eventure is that it feels like a very long and detailed adventure hook, not like a social adventure in and off itself. As for the PF2-version, the same structural gripes as in PF1 apply, though personally, my heart aches whenever I see a module not make use of PF2’s exceedingly elegant and word-count-friendly ways to make adventures shine.

You can directly support Raging Swan press here on patreon.

If you have a copper to spare, I’d appreciate a tip via paypal or joining my patreon.