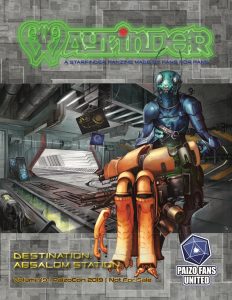 This installment of Wayfinder, the FREE publication published by Paizo Fans United, clocks in at 72 pages, 1 page front cover, 1 page editorial/ToC, 1 page SRD, 2 pages of advertisement, leaving us with 67 pages of content. Unlike previous installments of this magazine, this one focuses on Starfinder.

I usually don’t review Wayfinder, since it a) is FREE and b), as a whole, a no-brainer. If you do not have all Wayfinders, I’d strongly suggest downloading them all NOW. As for this one, I was explicitly asked to review this book, so that’s what I’ll do. Considering the amount of content, I will attempt to be brief.

After a one-page foreword, we begin with something that plenty of GMs can use – an advice guide by Hillary Moon Murphy on how to make starship combat (more) interesting and troubleshoot things that can happen. Interestingly, this does tackle the “I have Nothing to do”-issue of mystics and solarians that are not captains in two ways – one for a quick homebrew workaround, and one that is about making a rewarding ship for e.g. organized play. This section also tackles how to keep things exciting and moving regarding roleplaying. All in all, this is genuinely helpful advice, particularly for newer GMs., and Bret Indrelee also provides some player-facing advice! Cool! Hilary Moon Murphy has btw. also contributed a new bar to be found in the Spike – Ollie’s Option Bar.

K.M.B. Kovalcik provides an expansion for Incident at Absolum Station next – for players preferring more roleplaying, and less skill challenge-type rolling. For this purpose, two new characters are introduced: Aladai Vasser, a lashunta technomancer and potential ally, and Sarai Fresa, a lashunta operative, as a new adversary – both come with their own statblock and full-color artwork! The author btw. also contributed a nice sidetrek seed, one dealing with a skittermander pop quartet’s issues. That is hilarious. Oh, and also: Skittermanders should have been core. Randal Meyer btw. also has such a seed for you, and one that goes the other route, delving deep into noir-aesthetics – nice.

Joshua Hennington dives into the spirituality of space goblins next, with suggested connections and divine blessings provided for each of the 5 deities covered. I liked this one, though the verbiage of the divine blessings cosmetically sometimes diverges slightly from the standard. Fully operational, though!

Jonathan Hendricks is up next, with a new theme for psychic investigators and 3 supplemental magic/hybrid items. The theme is solid, but the items are problematic in several ways: For one, their bonus types are not properly codified; they also are very Pathfinder-1-y in providing significant fixed bonuses. Thirdly, active abilities fail to specify their activation.

Adam Bennett introduces us to a new ship, the Overwatch Wyvern, a tier 4 shuttle with linked plasma cannons on the front, which btw. does use its entire complement of BP – nice, valid build! (And yes, we get artwork; yes, I reverse-engineered that fellow, and unless I bitched somewhere, the ship checks out – well done!) Adam Kessler also has ships for us – a tier 4 fighter, and a tier 10 shuttle, both in service to KF Industries. Favorite part re starships, though? John Laffan’s “Ships of the winter witches”, which includes riles for ice melding systems, ice hangars, etc., as well as no less than 5 sample builds, ranging from tier 1 to 17. Really cool (haha) idea there – and the author actually has yet another article, dealing with a potential ally ship, and one for potential adversaries.

Did you play Final Fantasy 10? Well, courtesy of Jonathan Hendricks, you can now also play Blitzball, ahem, pardon me, I mean “Brutaris” in SFRPG – including adapted weaponized discs for 4 item levels. The concept is really cool here – I just wished we got full-blown rules for the actual sport played. Then again, if you wanted to play the SFRPG-equivalent of Wakka? There you go. Nicholas Wasko’s shuttlepong rules have more meat on their bones and actually allow you to play the game in-game –kudos!

Nicholar Flitter provides two new cortex options for the mechanic:  The A.R.C. Cortex allows you to tap into magical fields, helping you resist magic. The Servo cortex is cool: It lets you go, in a limited manner, “The Surge”, focusing on a type of exocortex with a servo-arm. Jessica “Meloriel” Catalan has two more NPCs for us, expanding on the Vat Gardens – one would be the benevolent Mama Gold, an ysoki mystic, and the second, an adversary, being Eris Half-Heart, a kasatha operative. Emily Parks has a lashunta mechanic and a hesper technomancer for us – and I enjoyed them having their own boons/drawbacks for engaging with.

ALL NPCs herein get artworks, mind you – this also holds true for Jim Long’s borais operative and skittermander soldier. And yes, the artworks thoughout this book are phenomenal. But the 5-armed skittermander soldier Moe-Eye, with his golden fur, arms stretched out? Tanyaporn “Yuikami” Sangsnit has managed what few have accomplished: I looked at the fellow and went all starry-eyed. It’s INCREDIBLY CUTE and awesome. Need to introduce this fellow in my game. Oh, and also: Skittermanders should have been core.

Chris L. Kimball also has a treat for us – literally, as it turns out, as he takes us on a tour through Absalom Station’s culinary ´wonders – now I want some Tazer Juice…If you’re like me and gravitate towards the strange and sometimes disquieting, you might be happy to hear that Jeremy “Belabras” Corff has 4 new symbiends for us – the barbed tentacle, crimson shroud, skinshell and shadowskein caul template grafts. These are interesting, and as a whole, well-executed.

Garrett Guillotte introduces us to new technomancer spell preparation options, and has a great angle: Spells coded in languages with different effects. The Nupper spell-programming language, for example, is based on Infernal, and infects spells, making other spells confronted with Nupper-code less viable vs. Lawful Evil outsiders…but it can also allow you to more easily control those of LE alignment. These spellcoding techniques are pretty potent, but also super interesting. I need to test them more for a final verdict, but theme-wise, they are amazing and a concept that fits SFRPG perfectly.

One thing I like about e.g. Everybody Games’ take on Starfinder, is that it’s NOT dystopian; as such, I also enjoyed reading, was the Planetary Rescue Foundation – a non-profit that seeks to save species and civilizations by putting their planets in stasis to grant everybody more time to figure out a way to avoid the respective cataclysm – and yes, these may be entered. That right there is gold, and I genuinely think that the angle could carry a whole campaign. Alex Riggs also has something that can be narrative gold for us – urban myths of Absalom Station!

The book also contains 6 new themes penned by Jessica Catalan, Adam Mulder and Christopher Wasko, and Bran Hagger has new fluff-centric write-ups for Freemarket Establishments – and if you’re looking for new weaponry, Adam Kessler and Nicholas Hite offer both rules for akatanas and shredder weapons – the latter are essentially knife/dart guns, kinda flechette-y…and are interesting: a glance at the damage output would make them OP for their levels, but being low-velocity, they deal only half damage versus anything in a heavy armor or more – okay, how does this interact with monsters? That needs to be specified, but other than that, I genuinely like this weapon type!

The issue also sports a brief sidetrek adventure penned by Paris Crenshaw for 4-6 4th level characters, and the module not only interesting and imho well-crafted, it also comes with player-friendly maps, which is a big plus for me.

The largest section of the supplement beyond that is devoted to a bestiary, with contributions by Beth and Dave Breitmaier, Charlie Brooks, Mara Lynn Butler, Jaster Catalan, Mischa Catalan, Kim Frandsen, Wojciech “Drejk” Gruchała, Jonathan Hendricks, Nicholas Hite and Stewart Moyer. These range from gelatinous spheres to space bunnies (!!!) to the spirits of malicious hackers becoming cryptogeists. Statted for starship combat, we also get belt giants, ransomware gremlins, inherently mad (and winged!) owlbear 2.0s and beyond. The statblock integrity does vary a bit here, and you can find minor formatting glitches  that sometimes extend to the rules (such as in maneuverability, bonus type missing, etc.), but there are plenty of cool ideas. Rules-wise, the most ambitious and imho deadliest creature is the cryptogeist, so that one’s, unsurprisingly, my favorite.

The magazine closes with poems/songs by Hilalry Moon Murphy and J. Russell Schneider – loved these as a sendoff.

Editing and formatting range from good to very good on a formal level; on a rules-language level, the oscillation is a bit more pronounced, as was to be expected from a book with such a wide variety of contributors. It should be noted that, while fully and lovingly bookmarked, the bookmarks in my version oddly refused to function. Layout adheres to a really neat 2-column full-color standard, and the pdf comes with a  TON of TOP-TIER full-color artwork; only a few pieces in the bestiary section do not reach this level of quality – and there is a TON of art herein. I mean, a TON. A “thank you” to all the artists, namely: Anable Amis, James Anderson, Becky Barned, Catherine Batka, John Bunger, Paul Chapman, Tyler Clark, Snow Conrad, Jeremy Corff, Andrew DeFelice, Catarina Eusébio, Peter Fairfax, Elijah Garrard, Bob Greyvensetin, Chris L. Kimball, Clay Lewis, Dionisis Milonas, Alex Moore, Tim Nightengale, Alberto Ortiz Leon, Mike Lowe, Beatrice Pelagetti, Jessica Redekop, Laura Shaw, Tanyaporn Sangsnit, Todd Westcot.

Labor of love. That is what characterizes Wayfinder perhaps best. This magazine is chock-full with material and ideas, and particularly the adventure, the notion of magic programming languages and the like are pure gold. The sheer amount of ships, monsters and NPCs is also impressive. Heck, I’d consider this worth downloading even if every single piece of crunch would suck – the artworks are that great…and the crunch is actually also better than in quite a few commercially-available books for SFRPG I’ve read. It’s not even, nor perfect – but this is a fantastic offering, considering that it is FREE. As noted before – you should download this, particularly if you feel that Absalom Station needs more color/detail. 5 stars + seal of approval…and I’d like to thank everyone who contributes to Wayfinder: You all rock!

You can get this FREE love-letter to Absalom Station exclusively here on Paizo!