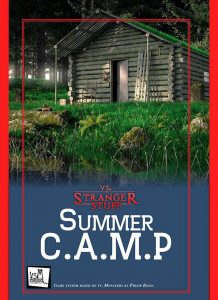 This adventure for vs. Stranger Stuff clocks in at 16 pages, 1 page front cover, 1 page editorial, 1 page SRD, 1 page advertisement, leaving us with 12 pages of content, so let’s take a look!

Now, it should be noted that this module was originally released for season 1 of Vs. Stranger Stuff; I will look at it within the context of season 2’s significantly expanded and refined rules, which means that you should consider this to be retroactively designated as an easy mode adventure. It should be noted that it’s very easy to integrate recurring characters from other Vs. Stranger Stuff modules within this adventure as NPCs – they accompany the PCs at their task and could, depending on how you wish to run this, meet unfortunate fates…or, for a more family-friendly interpretation, just add to the scare factor.

Anyway, this being an adventure-review, the following contains SPOILERS. Potential players should jump to the conclusion.

All right, only GMs around? Great! So, local philanthropist Travis Hart has purchased a picturesque location and the PCs have scored a sweet deal: School’s out and they can earn some serious bucks for fixing up Camp Hope! Yeah, well, sure, that place saw a couple of grisly murders in the 60s, but that’s in the past, right? I mean, what could go wrong?

Well, for one, school bully Chad Helms is also working the site, potentially making the PC’s life miserable. Chad is picking on Jessica, one of the recurring class mate characters, and the PCs may well want to intervene. This would be a good place to note that we get stats for Travis, Chad and Jessica, with Chad getting the pretty potent headlock ability. It should be noted that this Good Gimmick has been SIGNIFICANTLY improved in vs. Stranger Stuff Season 2 as far as rules-language is concerned; I *strongly* suggest using the rules of the new edition. (Something that btw. holds true for, well, pretty much any such rules-component; Season 2 is a vastly superior game.)

Anyways, before the PCs can knock out Chad, they’ll see strange lights in the distance, which the bully will use to skulk away. Now personally, I am not a big fan of this type of railroading; it should be up to the PCs or at least, offer a chance, to let him get a proper comeuppance. But that may be me.

Travis, in a nice play against the conventions, has seen the lights as well and suggests scouring the campgrounds, which is, coincidentally a good way to split the party and make some PCs share the company of Jessica and Chad. Nice: The mini-investigation yields results based on the suite of the card drawn: At the entrance, dime-sized scorch-marks and a destroyed entry gate loom; bright lights and a faint siren make the water treatment plant easy to spot and the bathhouses contain a family of raccoons. If the PCs investigate Chad, they’ll find a stash of nudey mags…which may well change dynamics here.

Smart PCs attempting to sneak around will be found by Travis, unerringly…and some might say, creepily. Over the next couple of days, the weird lights will reappear; electronics are found dismantled and tools go missing; if the players don’t put it all together, an Ace Mental (use Brains in Season 2) challenge can yield the solution, with every day decreasing the required target.

Beyond the obviously hilarious speculation your players may engage in, the module provides a variety of entertaining false leads: Ghosts from previous campers! Devil worshipers! Merpeople in the lake! Chad is a psychopath! Travis is the original serial killer! Te creepy counselor is an undead maniac! Rabid, mutant raccoons run the fields! All of these have in common that they are more detailed in the book…and that they’re wrong.

Ultimately, the PCs will find the truth…a dog-sized spider-shaped robot! Badly damaged, trying to rebuild itself. The thing is, surprisingly, non-hostile and seems to be hiding from another robot, which seeks to destroy it. It can barely communicate with broken voice module and charades, making it an interesting NPC to interact with. And yes, the module mentions the reactions of NPCs to being shown this secret camper. Suffice to say, the PCs will probably want to keep it hidden from Travis and Chad…and after a few days of hijinx (come on, we all have seen enough secret friend movies for inspiration…) of trying to keep the robot hidden, the hunter will appear – basically the evil version of the PC’s new robot friend. While this potent machine can’t kill humans, it can hurt them…and its directive is to destroy the friendly DSR (damaged spider robot) – something the PCs should definitely want to avoid!

If they best the brutal hunter, they may well wave their new DSR-friend good-bye, as it scampers off into the woods just before the inevitable military clean-up crew in hazmat suits arrives to make the debris vanish. The PCs are in no danger, but the presence of these folks is still concerning. In the end, the PCs may have a ton of money from the job…but whether DSR lives or is destroyed ultimately decides whether they’ll leave this module with a new Bad or Good Stuff –seeing your robot friend being killed by a robot can be traumatic, after all. If DSR lives, they’ll have an ally for life, though!

Ben Dowell, with additional content by Lucus Palosaari, delivers in this book – pretty big time, I might add. If you’re like me and always had a fascination with *see SPOILER-section*, if you recall all those classic movies, you’ll smile more often than not while running this. The ally the PCs can gain here is nice and the module is, as a whole, a warm-hearted and nice adventure with a bit of tension, a bit of investigation, detailed false leads…you get the idea While the module could be a bit meatier regarding the false leads and investigation itself, while I would have loved to see a couple of fully fleshed out scenes pertaining the kids trying to cover for the new friend, this most assuredly is a worthwhile offering that can work for both adults and kids equally well. While use with season 2 requires a couple of minor modifications, this remains a very much worthwhile adventure to check out. Considering the low and fair price-point, my final verdict will clock in at 3.5 stars, rounded up for the purpose of this platform.

You can get this nice, inexpensive little module here on OBS!

You can get Vs. Stranger Stuff Season 2 here on OBS!