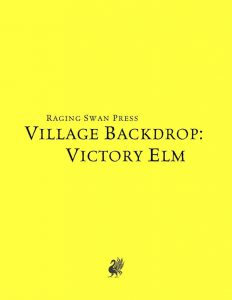 Standing amid gently roiling hills, Victory Elm derives its name from the massive tree that gives the village its name; goats graze on the hills, though the absence of any other tree nearby may seem odd to some. While a few hill giants remain nearby, the village has attempted to entice the creation of additional settlements to make the place less remote, but so far to no avail. The items for sale in the village have btw. been properly adjusted to represent the realities of old-school gaming.

It should also be noted that this village features a museum still holding fabled weaponry from the last altercation against the giants, and we do have a war memorial as well. Nice! The magic weapons that remain here have btw. been properly adjusted to more conservative old-school realities.

As always with the series, we receive full notes on the surrounding locales, have information on local nomenclature and dressing habits, as well as a section of lore and some rumors that can be used to reward PCs for doing their legwork. The 20-entry dressing/event table allows you to jumpstart the adventuring quickly and painlessly as the PCs explore the place, and one of the locales does come with its own additional table of 6 sample events. One of the strengths of the other iterations would be the presence of more rules-relevant aspects in this one; in the system neutral version, these obviously are mostly based on roleplaying, but this does not change the fact that the hooks are more complex than usual.

Mike Welham’s Victory Elm manages to capture a borderlands-vibe very well; the looming threat, the sense of melancholy and an era of peace ending, the threats that are here – this is a fun village that particularly will do its job exceedingly well if you’re planning a vs. giants-type campaign. The supplement does lose a bit of its overall appeal in contrast to the other two versions, courtesy, system-immanently, of it having not as much meat behind its tale, but remains a good offering. My final verdict will round down from my final verdict if 4.5 stars for this iteration – if you play PFRPG or 5e, definitely get those versions, even if you usually prefer the more roleplaying-focused aspects of the system neutral versions.

Please consider leaving a donation or joining my patreon if you consider my services useful.