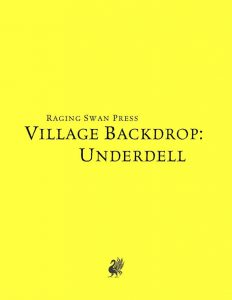 Situated near the Salt Mire, the halfling village of Underdell, has been seriously impacted by the plague that ravaged Ashford (a classic Village Backdrop!); while paranoia ran rampant, an evil halfling bandit named Vihtori has seized both the day and control. Now, fear is the defining characteristic of this place. This village, if you’ve been following Raging Swan Press’ releases, is thus one of the places situated in the Duchy of Ashlar, but can easily be inserted into pretty much any game.

Speaking of events: This pdf goes beyond the usual array: There are 8 keyed locations provided, and all come with their own paragraph of read-aloud text. 4 of these locales have their own, specific event tables, adding further direct adventuring options to the fray. The system neutral version does not have a marketplace section for the entire village, but does provide adjusted notes regarding items for sale in the individual locations. Several of the keyed locations also feature some rather cool adventure hooks, which truly benefit from the context of Ashlar, allowing the author to spin some more complex scenarios that extend beyond the confines of the village.

We also get a total of 4 NPCs, depicted, as usual, in the fluff-only iteration that paints them as viable characters, noting mannerisms, background, etc. The system neutral version does have a remnant, where “wizard” is used as a class-reference instead of “magic-user”, should that be relevant for you.

This may be a strength for you and the purposes of your game – as a place that won’t hog the entire spotlight, this does a good job. The system neutral adaption of the supplement is solid, though I couldn’t help but feel that, particularly in this version, it sports more overlap with other villages, courtesy of there simply being more out there to choose from. Still, this does not suffice to rate this down. As such, my final verdict will be 4 stars.

Please consider leaving a direct donation or joining my patreon. It keeps the lights on.