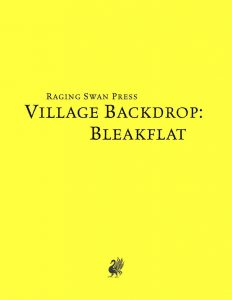 Bleakflat! What a name. I have rarely read a village with a name that evoked desolation quite to the extent as this does, so from a nomenclature angle, we’re off to a good start. From barren soil rises a rocky bluff far from any dungeons, ley lines, trade routes, or, yes, reasons to traverse the desolate waste. And the leitmotif carries over to the local populace, who, with relatively listless gait, slurp watery mutton soups in silence.

Bereft of special talents, armed forces or the like, one cannot help but wonder how the local population manages to fend off the wolves and giant bats that seem to have no compunctions about attacking travelers. Well, the reason is as easily evident as the expert roleplayer may have guessed: The warm and welcoming mayor is actually a vampire who tends to “his” humans as a benevolent farmer would…but relations tend to become strained when his elitist dhampir daughter (ironically, more despicable than her full-blown undead father…) and her treatment of the humans are concerned…and when he has undead guests, they don’t always behave.

The settlement does feature notes pertaining to the demographics and comes with a nice little selection of classic notes for villager appearances, dresses and nomenclature. As always, we receive 6 whispers and rumors that help keep the PCs on their toes/drive along proceedings and village lore. Cartography is provided by the expert skills of Maciej Zagorski. Notable locations include various families and their interaction with their semi-kinda-benevolent vampire overlord, the blood baths…oh, and the bleakwood, where the vampires sometimes hunt for the thrill and sport of the chase.

Yeah. They’re vampires. What did you expect? Sparkling? Anyways, the pdf sports some seriously nice b/w-artworks of the dilapidated hovels and is supported by no less than 6 sample events to kick adventuring into high gear if the PCs start to idle. There is even a bit of humor here: One notable NPC was granted paladin powers. The pdf remarks “Aldrich hopes this is just a phase.” This sentence, usually connotated with parents talking about their goth/punk/whatever kids perfectly exemplifies the mindset of the master of this place and really made me smile. Oh, and obviously, horses are not used for riding round here – they are food for the roaming giant bats…

Jeff Gomez’ Bleakflat is interesting in that its theme of decrepitude is supplemented by a leitmotif of conflict between generations and a bit of social commentary, if you’re inclined to read that into the supplement: The population needs their master to survive, but at the same time is slowly destroyed by him. Sounds pretty much like dominant employers in remote communities everywhere to me. Anyways, the settlement is nice, has some thematically consistent angles and can go in several ways, depending on the morality of the PCs and how the GM elects to depict the situation – from full-blown horror to shades of grey “lesser of evils”-gameplay, there is a lot of potential here. The system neutral pdf loses exactly nothing in comparison to the PFRPG-iteration, which is a big plus as far as I’m concerned. As a whole, this is a nice, fun village and well worth a final verdict of 5 stars.