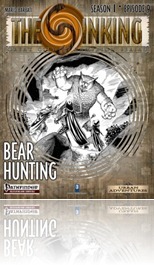 This installment of “The Sinking” from 0one Games is 15 pages long, 1 page front cover, 1 page editorial, 1 page ToC, 1 page advertisement, 1 page back cover and 1 page SRD, leaving 9 pages of content, so let’s check this out!

This being an adventure-review, the following text contains SPOILERS, so potential players should jump to the conclusion.

Still here? All right! After the PCs have supposedly found the gold-filled tomb of Furam (see the Plumb Line), a kind of gold rush has started on the sinkhole which has seen many a person hurt. Subsequently, the army has taken to guarding the place against intrusion, but sometimes, things just go wrong: A mercenary of the notorious Bloodfangs, a bugbear named Karoc Skullsplitter to be specific, has killed a captain of the guard and now the military is hard-pressed – immediate repercussions by them will be seen as revenge by the Bloodfangs and thus, the PCs are tasked with capturing Karoc Skullsplitter. There are irreconcilable factions after the murderer, though: The Kharel and the influential widow of the victim and both want the PCs to procure the fugitive.

Time is of the essence, though, as the bugbear has been seen entering a gang headquarter – which proves to be an elaborate trap that might take the gang leader as well as the PCs to the grave, while Karoc uses his allied gang of thugs, the winged angels to try and escape the city. In order to catch the perpetrator, the PCs will have to succeed in a neck-breaking chase through the streets while being peppered with arrows, caltrops, alchemist’s fire and the like. When they finally catch up with the escapee, they’ll be between the fronts – Karoc’s trail in the wilderness leads right into an owlbear’s cave and two dangerous opponents can thus be used against one another -just hope your players are smart enough not to get caught in the middle…

Once they, via any means, have returned the bugbear to their employer of choice, they will have made at least one powerful enemy, though…

Editing and formatting are top-notch, I didn’t notice any glitches. The layout adheres to a 2-column standard and comes with some nice pieces of b/w-artwork as well a bookmarks. The fast-paced chase presented in this installment makes for a neat action-romp that is on the upper scale of difficulty without being unfair. The tie-ins with the metaplot of the Sinking are subtle and very much appreciated, as they start to evoke a sense of continuity, which I hope will be expanded in future installments. What can I say? Tough decisions, a neat chase and a furious finale -for less than 2 bucks. You’ll be hard-pressed to find a better bang-for-buck ratio out there and thus my final verdict will be 5 stars – a great little scenario and apart from the extraordinary “Politics Unusual” and the weird “Animation” one of my favourites in the season so far.

The Sinking: Bear Hunting is available from: