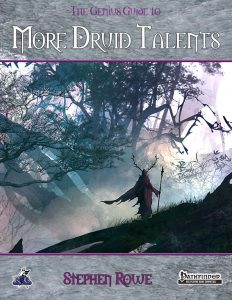 This expansion for the Talented Druid clocks in at a massive 40 pages, 1 page front cover, 1 page editorial, 1 page SRD, 3 pages of advertisement, 1 page blank, leaving us with 33 pages of content, so let’s take a look!

This pdf was moved up in my reviewing-queue at the request of my patreon supporters.

Okay, here things become interesting, as we get new stuff – where the core pdf provides the talented druid framework, this one presents new options, including guidelines (right in the introduction) that allows for their use in context with a regular druid class. The edges this time around take no prisoners, and tie in with pretty widespread and beloved concepts – it begins in a comparatively subdued manner, with astrology, which first allows for the consultation of stars to glean knowledge from them, and then, later, provides deeper insight, granting knowledge akin to mighty divinations. This edge also acts as a prerequisite for plenty of talents pertaining moons, planets, etc., allowing you to depict a natural scholar of the supralunar realms.

Then, things start to become VERY interesting indeed – the ley line edge for spellcasting druids, which, for once, does not consider itself with tapping into ley lines per se, but instead focuses on moving them in a way, enhancing areas as more and more ley lines are bundled. This can result in a variety of options that range from making to area seem haunted to mists and the like, finally culminating in the option to make the area behave as a dead magic zone. As a minor complaint: As written, the movement of ley lines is tied to gaining access to a new level of spellcasting, with no minor tweaks included. This means that the ability is more useful for NPCs and campaigns where the druid doesn’t move too much – an understandable balancing tweak, but also one that I feel could have used a minor means to temporarily bypass. That being said, I do love that this provides rules to create druidic places of power. (As an aside, I’m living not too far from a real life druidic grove from ancient times, and considering the atmosphere of that place…yeah, I can see it.) Speaking of groves – there is an edge to erect a monument, which, once more, ties into the ley line edge as a sort of anchor for ley lines – and destroying these can have a variety of rather painful effects. In a way, this is another story option that primarily comes into play in narrative contexts, as well as for NPCs, so some sort of direct benefit would have been nice…for example, in the context of kingdom building, these probably should have repercussions and effects.

The pdf also presents lycanthropy in its “natural” form as an option; so not as a curse, but as a shapechanging trick that is not infectious. Big plus here: The pdf actually differentiates between different types of lycanthropy regarding abilities granted – wereshark druids have different tricks than werebats. Good call! Being reincarnated is also included, and then there’d be the words of creation. These are 9 words spoken at the dawn of time, and a druid with this edge gains Linguistics as a class skill. The edge may be taken multiple times, with each time providing access to a word of creation, provided minimum level prerequisites for having more than one are being met. These words duplicate spell effects, with 10 + spell level + Wisdom modifier denoting the DC, and class level as CL. These behave as SPs that have a compulsory verbal component, and may be dismissed as a free action. Rules to identify them via Spellcraft are provided, and only one word may be in effect at a given time, provided no talents have been learned to bypass said limit. The respective words each denote their action to activate, and have an interesting thing in common, namely that new abilities are not unlocked based on level progression, but on specialization – the more words of creation you know, the more abilities you’ll be able to execute per word, and the better they become.

The words are the 4 traditional elements, fate, space, time, life, death. To give you an example: Air nets the druid Auran as a bonus language, and lets them summon winds in a 20-ft. per druid level-radius of up to strong force as a swift action; higher numbers of words of creation unlock gust of wind as an at-will SP, and later, that one may be redirected and maintained as a swift action – take that, overpowered archery-builds… Quicker casting, longer range and greater windforce may be found as well…though the 9-words version uses untyped damage. And yes, I’d complain about that, but considering that whirlwind etc. also use untyped damage, I won’t. Still, I wished the pdf had codified the damage incurred by windstorms in a concise manner. I was always irked by PF1 not typing damage incurred from storms etc. properly. But that may be me. Death lets the druid cause a creature below 0 hit points and stable to resume dying, behaving as bleed as a SP. Considering that bleed is a standard action to cast (which is also the default of the SP), I’d have considered it wise to decrease that to a free or immediate action. Druids with more words get at-will effects somewhat akin to death knell and higher hit point thresholds, slowly building up to power word: kill-esque levels. Nice. At this point, you get the idea – in a way, this language of creation-engine is certainly better than Paizo’s ill-fated Words of Power-engine, and as far as a suite of class abilities is concerned, provides a surprisingly nice sub-engine. I should also mention that, no, life’s fast healing options may not be effectively cheesed. Though there is a way, so let me indulge in a bit of truly grotesque theory crafting:

The base word nets an aura that heals targets, but only when they are at negative hit points. The regular word applications have a hard cap on how often they may affect a target in a given timeframe, but this aura does not. So, theoretically, provided you can move hit points around freely, you could use a bunch of half-dead kittens and the aura, with hit point transfer, for unlimited healing. Slow unlimited healing that is contingent upon keeping all critters close to death’s door, and on the ability to move hit points from multiple targets to others. Yeah, know what? For once, I’ll shut my trap, and tuck my box of kittens away. As an aside: If you’re interested in the Space word, which focuses on the manipulation of sizes, I STRONGLY urge you to get the fantastic Microsized Adventures by Everybody Games, and potentially Microsized Templates, for not only more options, but also a sped-up playing experience. Similarly, ´(de-)aging becomes more comfortable to use with the Childhood Adventures book, but that as an aside.

Anyways, so the edges provide a rather distinct array of options here, how do the talents fare? Well, here, the words of creation come fully into their own, expand from options to essentially a whole mode to play a druid of its own. Want an armor of energy, with effects contingent on word of creation used? You can have that. Want to awaken animals and plants? There’s a talent for that. Want to be a good druid, always accompanied by blue skies (cue in Frankenfurter’s classic song)? You can have that. (As an aside – I love this one. It’s just so…nice. Like an ability that, you know, a HERO would take…) And yes, if you’re an edgelord, you can choose Dark Skies instead. It’s probably what folks would expect me to gravitate towards…but personally? Blue Skies.

Breathing life back into the fallen if you know the word of creation? Possible. Those that know the earth word can gain a burrow speed. Know the words of fire and water? You can provide solace from cold and heat. Did I mention that each word has its own associated curse that can be unlocked with the right talent? These are potent, and thankfully cannot be spammed, but oh boy, those cursed will remember your name…

Speaking of curses. You don’t like non-infectious lycanthropy? There’s a talent here to change that and spread the curse of the beast. Oh, and yes, hybrid shapes may be enhanced further. Wanna be diurnal or nocturnal? Talents included for that. (And yes, they can’t both be taken.) If you want somewhat elemental features and abilities, you may wish t consult the elemental aegis ability tree, and there is a HUGE (as in: Spanning multiple pages) talent that may be taken multiple times, allowing you to take on more fey-like properties. Establishing territories to guard over, coaxing mental into shape, the ability to enter hibernation…and what about being such a brilliant herbalist that you can duplicate potent condition heals? At higher levels, we have swarm master-themed tricks and options to entomb the unfortunate, weaponry granted by the words of creation…you get the idea. But how does it retain its balance? Well, there always is the hard cap on words of creation in effect, and even though the base engine seemingly implies otherwise at once point, this cap remains pretty fixed. On the plus-side, there are combination effects and synergies galore – know air and death? Congrats, you can now generate a nauseating miasma! If you like combo-playstyles and organic character evolution, you’ll most assuredly enjoy this material. And yes, there is the good ole’ “save vs. wall of text” summary of talents by general theme to help prevent choice paralysis.

Editing and formatting are top notch on a formal and rules-language level. Layout adheres to the series’ two-column full-color standard with its wide margins, but presents a lot of CRUNCH in its lengthy pages, with stock photography and artwork employed. The pdf has bookmarks for chapter headers, but not individual talents or edges.

Stephen Rowe’s expansion for the talented druid really makes it shine; the word of creation engine is a mighty tool that can drastically shift how you play a druid – any druid, really. Add to that the other themes, including the massive fey-themed array and the astrology-angle, and we arrive at a supplement that ranks as easily one of the best druid expansions released for PFRPG’s first edition. I can unanimously recommend this little gem to fans of the druid. My final verdict will clock in at 5 stars + seal of approval.

You can get this massive expansion for the druid, not just the talented one, here!

You can find the talented druid here!

Missed childhood adventures? You can find it here!

Microsized Adventures can be found here, and the super useful Microsized Templates are right here!