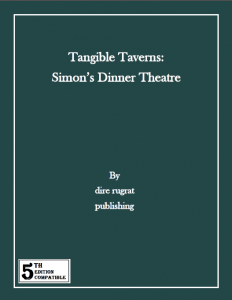 This 5e-version of the Tangible Taverns-entry clocks in at 14 pages, 1 page front cover, 1 page editorial/ToC, 1/2 page advertisement, 1 page of SRD, 1 page back cover, leaving us with 9.5 pages of content, so let’s take a look!

Situated in the dullest part of town, a corner lot with a perfectly manicured lot, there is a place with potted flowers and a little sign that reads “Simon’s” – once you enter the place, you will be in a foyer and need to pay an entrance fee that includes a meal, a drink and entertainment – for beyond the foyer, there is a main room that features a stage. Started by a young playwright named Simon Marlowe (nice nod here!), the playwright has since then met his fate in an unfortunate carriage accident, but thankfully, his nephew Augustus took over…while his existence was nebulous at best prior to his arrival, he seems to be a capable playwright of his own…the show must go on, right?

Servers don’t take orders, but ask for dislikes and everyone gets the same food at a given table and while the quality is superb, as a person (and by proxy, as a player), that would still elicit grumbling from yours truly. 😉 A total of 6 brief rumors and 12 sample plays with small synopses can be found as well, adding a nice detail to the proceedings: “A Game of Crones” or “The Rise of the House of Winter” certainly got a chuckle out of me…

6 sample events, from ill actors that need a stand in (bard – step forward!) to an actor needing his trusty bag o’ shrooms to act, the events are creative and nice.

Augustus Marlowe, just fyi, would be an NPC who gets a full statblock – he’s basically a challenge 7 kinda bard (sans pretty much all abilities) with a full complement of spells…he actually has the spellcasting array of a lvl 15 bard! Speaking of playwrights: Finnley “Finn” McEwan, also gets a statblock – he may, as a reaction, increase his AC, 1/turn sneak attack (somewhat odd restriction) or use the Dash, Disengage or Hide action as a bonus action. (Here, a minor glitch can be found – a missing blank space.) He would be another individual whose plays regularly grace the stage – and yes, he actually knows what he’s doing! Ina fantastic context, you can obviously expect more from a play than what we mortals on our good ole’ earth are accustomed to – and it would be Flibbidus Starriwynckles task to provide just that: The gnome acts as the trusty illusionist that keeps the plays engaging and action-packed. His statblock nets him advantage on all saves based on mental attributes versus magic and his spellcasting prowess extends to 3rd level, a befitting range for his challenge 3.

Of course, the play does have actors as well – Corah Bousaid, Eldrin Semarantha, the platin-blonde tiefling Talia – these would be some of the fluff-only entries that paint a surprisingly diverse picture: Eldrin, for example, copes with her shyness by staying in character and actually is hinted to be bisexual. Kel Kellsen, a somewhat arrogant dwarf, but capable actor, makes for a nice twist of the self-proclaimed “lady’s man” – trope…and he actually has a secret that is decidedly non-sinister for a change. Of course, plays do require music and Curulaeron Meadowpane (“Please call me Cerulean.”), the elven musician does provide just that. His statblock presents spellcasting of up to 3rd level, just fyi. Cerulean’s plant companion from the PFRPG-version, alas, has not found its way to 5e, even though the fluff still mentions it. Oh, and his predilection towards plants extends to growing his own sort of “entertainment” – you know, he likes his home-grown… *cough* means of extending his consciousness.

Now, in the beginning, I mentioned the spell – you whisper a question to an arrow or bolt, which then spins to point in that direction. I like the visuals, but at 2nd level, it may be a bit high – I’d have made that a 1st level spell or cantrip.

Editing and formatting are top-notch, I noticed no hiccups. Layout adheres to Dire Rugrat Publishing’s two-column b/w-standard and is pretty printer-friendly. The pdf’s cartography of the tavern is solid, though I wished a bigger version for kind-of-handout use was included. The pdf comes fully bookmarked for your convenience and art-wise, this deserves special mention: Each character herein gets a nice b/w-mugshot – particularly cool considering the low asking price.

Ken & Kelly Pawlik deliver concept-wise in this tavern: Simon’s is an unconventional, interesting place full of quirky characters and a nice change of pace from more traditional taverns/restaurants. There is quite a lot of adventuring potential to be had here and the characters feel dynamic, alive and interesting. That being said, compared to more recent entries in the series, one can see that this 5e-conversion was an earlier offering – the NPcs already have unique tricks, but from the little mention of a plant companion that fell by the conversion-wayside to the builds of the NPCs themselves, the 5e-version doesn’t deliver on the same level as the Pathfinder iteration. If you have the luxury of choice, the PFRPG-version’s the better one this time around. Hence, my final verdict will clock in at 3.5 stars, rounded up due to in dubio pro reo.

You can get the 5e-version of the cool tavern here on OBS!