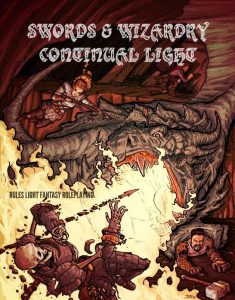 So, first things first: What is this? Well, Swords & Wizardry Light is a super-brief twist on the classic Swords & Wizardry OSR-rules-set – and it’s available for free, so you can check it out without any hassle. All basic rules are presented in the file, and it really helps getting newbies into gaming – no need to read hundreds of pages of rules and the like. That being said, its use is contingent on an experienced gamer filling in the brevity-immanent holes, and it does not suffice to play a longer campaign. It is intended to provide easy access to gaming at, for example, conventions, but from a longer-term perspective, it is not stand-alone in the traditional manner. This is where this pdf comes into play: Based on Swords & Wizardry Light, this is a slightly expanded version – one that is still rules-lite by pretty much every definition of the word, but *does* feature all the components you’d really need to run the game without requiring background knowledge of a big book – in that way, it’s a take on the light version that is “continual.”

All right, so, how does Swords & Wizardry Continual Light (SWCL) work? Well, we have the 6 classic ability scores. You roll 3d6 for them, and stats of 15 or higher net you a +1 bonus, with the respective attributes noting to what the bonuses apply. Race-wise, dwarves, elves and halflings are covered. Dwarves and halflings may only become fighters and thieves, while elves also qualify as magic-users.

Now, as per the base system, AC values for both descending and ascending ACs are provided, something to bear in mind. In this review, I will opt for noting bonuses as ascending – if you read plus X, this means it’s a bonus, not a penalty. Dwarves get +4 to AC versus Large targets, +1 Find and Remove Traps and Open Lock, +1 to hit and damage versus orcs and goblins, and +4 to saves vs. magic and poison. Elves get +1 to hit versus orcs, goblins and undead, immunity to paralysis, +2 to saves vs. magic and +1 to Hide in Shadows and Move Silently. Halflings get +4 to AC versus large enemies, +2 to hit with ranged weapons and +1 to Open Locks, Pick Pockets, Hide in Shadows and Move Silently. Humans don’t get bonuses, but qualify for all classes.

Now, as far as classes go, the system knows 7 levels. Fighters begin play with 1+1 HD (might have made sense to spell briefly out what that means for novices) and a BHB (basic hit bonus) of +0, improving that by +1 at every level. Save begins at 16 and improved to 10 in a linear manner. The fighter gets a HD every level. True to old-school, fighters get one attack per level versus foes with 1 HD or less. They also have +1 to saves vs. death and poisons. All classes come with multiple gear sets to choose from.

Clerics gain 6 HD over their levels (4th level netting just +1) and their BHB improves from +0 to +3. They learn cleric spells of up to 3rd level. The cleric gets +2 to saves vs. death and poison, spells of up to 3rd level, has the traditional weaponry restrictions (blunt weaponry and slings) and comes with a turn undead table. There is no daily limit of uses for the cleric’s turning. Saves progress linearly every level, starting at 14 at 1st, improving to 8.

Magic-users get +2 to saves vs. magic, up to 4 HD (every even level nets just a +1); saves begin at 15 and improve in a linear manner, and the class only gets +1 BHB at 5th level, which improves to +2 at 7th; armor restrictions and weapon restrictions apply, and magic-users unlock spells of up to 4th level.

Thieves have the same save-progression as magic users, starting off with 15, but get up to 5 HD, with 3rd and 6th level just yielding +1s. BHB scales up to +3. Thieves may use any weapon, but are restricted to leather armor. Backstabbing foes nets +4 to hit and deals double damage. Thief skills are noted not in a percentile manner, and instead offer a X in d6 chance that increases by +1 at 3rd and 5th level, capping at a maximum 1-5 chance of success. This thankfully makes the 1st level thief moderately competent and not useless.

Levels are gained by completing adventures. Simple and easy. However, the book does offer a bit more: There’s a value in brackets here – it’s for so-called optional classes. These include monks, assassins, bards, druids, paladins, rangers, necromancers and swashbucklers. They are more powerful than the standard classes. Assassins and Swashbucklers in particular tend to be tougher the regular classes. Anyways, there are three optional rules I’d very much advocate following: Maximum hit points at 1st level, allowing humans to swap the lowest ability score with a 15 and one that treats 1st level clerics as having 0 1st level spells, granting a bonus spell for high Wisdom.

Beyond 7th level, PCs may accumulate perks by paying with credits – one credit is gained per adventure completed. These may be used to pay for more hit points, lowering saving throws, etc. Class-only options are also covered. These are solid. The pdf does include a series of weapons and ammunition is not tracked in SWCL. Damage ranged from 1d6 – to 1d6 +1. The game knows 5 types of armor and some adventuring gear is also included.

Combat is simple: You determine initiative: 1d6. Side that rolls higher goes first. There is a chance for a tie – “the sides are considered to be acting simultaneously. How does this work? No idea. Options for the game are simple: Moving, attacking, casting spells. Characters can attack and move or cast a spell and move. Characters within 10 ft. are considered to be in combat. Missile attacks into combat have an equal chance to hit enemies or allies in combat. Targets with 0 hp die, and a day of uninterrupted rest nets 1 hit point. Monsters save by subtracting their HD from 19. Base movement per round is assumed to be 90 ft. for the small races 120 ft. for humans and elves. Running doubles that. Spells are depicted in a minimalist bullet-point style, noting range and duration. Traps are categorized in 4 different lethality degrees, and the pdf contains an impressive array of critters from the classics, with special monster traits noted in the back. Mundane and magical treasure is also included.

We end with a handy glossary and half a page of advice to convert Swords & Wizardry to SWCL and vice versa. The pdf comes with a no-frills character sheet.

Editing and formatting are very good on a rules-language and formal level. The pdf is easy to grasp, pick up and play – sequence of presentation makes sense. Layout adheres to a no-frills 1-column b/w-standard with a mixture of really nice and some less impressive b/w-pieces. Annoyingly, the pdf has no bookmarks, which constitutes a comfort detriment when using this. Particularly rules-sets, even rules-lite ones, should allow for quick navigation.

Zach Glazar, James M. Spahn and Erik “Tenkar” Stiene’s take on Matt Finch’s original retroclone is a resounding success in what it attempts to do. This is traditional old-school gaming, with the classic attributes and everything, envisioned in a way that is as accessible as it’s bound to become. This is a fantastic way to get into gaming. Now, I do think that there are a few components here that could use a tad bit of streamlining. Death attacks should have a save, imho, and I’d limit swashbuckler armor choices. Similarly, the fact that there are ascending and descending AC values can be slightly confusing for newbies, and the +1 in the HD table should be explained. Apart from these nitpicks, many of which were born from tradition and the desire to remain faithful to the source material, this represents a resounding success for a more than fair price point. While not perfect, I consider this well worth checking out – my final verdict will clock in at 4.5 stars, rounded up due to in dubio pro reo.

You can get this inexpensive, easy to learn and play game here on OBS!