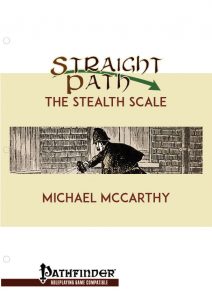 This optional subsystem clocks in at 9 pages, 1 page front cover, 1 page editorial/ToC, 1 page SRD, 1 page company logo, leaving us with 5 pages of content. The screen-version optimized for tablets instead clocks in at 15 pages, laid out in landscape format, and sports the same content.

This review is based on the revised and improved version of the pdf.

A huge improvement of the engine is the introduction of the masked conditions –basically, impaired creatures no longer necessarily drag down their groups and instead are treated as masked until the condition has been resolved. More on that later, but it is a game-changer of an improvement. Masks may pertain to either hearing, sight or other senses.

The Stealth Scale knows a total of 5 different states, which are summarized on a handy cheat-sheet that can now be found on the final page – now actually also listing mechanical benefits! This makes the cheat-sheet actually useful to have, so yeah, kudos.

With the Stealth Scale, other creatures are situated at a distinct point between Awareness and Stealth, which constitute, like on a scale, opposite sides of the same value. Increasing one decreases the other. A Stealth check is rolled versus 10 + highest Perception modifier from the observing group + number of creatures in the group + 5 per advanced sense in the group; Alternatively, 5 + CR can be used to calculate DCs; once more, significant improvement, as it makes the DC less metagamey.

The pdf proceeds to explain the most common actions and how they interact movement on the Stealth Scale – the rules are tighter and giving signals and creating distractions (and using them!) now actually are covered: Basically, distractions create temporary masks, which is really elegant.

What are masks? Means to prevent detection. They only apply if they can fool all targets in the opposing group; a character may only benefit from one mask per sense; for each mask successfully used, the maximum level of awareness that may be reached on the Stealth Scale decreases by 1. Temporary masks are more fragile: Whenever the character using them would increase Awareness, the character must make a new skill check against the DC or the temporary mask is lost. Cover and concealment grant temporary masks.

Group Stealth is still handled by designating a Point Man – this character makes the Stealth check on behalf of the group. All other characters are designated as operatives and increase the DC of Stealth checks made by the point man by 2. Actions by all characters may increase Awareness, but only the Point Man may increase Stealth. Rejoining groups that temporarily split is btw. covered as well.

Editing and formatting have been significantly improved. Layout adheres to the two-column standard with a few subdued colors. The pdf has no interior artwork, but comes fully bookmarked for your convenience.

Michael McCarthy proves not only that he cares; his improved version of the Stealth Scale now actually succeeds where the previous iteration failed miserably:

The system is elegant, quick and easy to grasp and the introduction of the mask-concept also nets the GM some tight controls and easy customization angles beyond what is contained herein – specialized masks can theoretically be created to suit individual requirements. Big kudos!

Gone are the hiccups in interaction with Occult Adventures and the cheat-sheet is actually useful as presented. To add a further bonus, the system is less metagamey without compromising the ease with which it can be used. Like day and night, a vast improvement over the original iteration!

I consider this an excellent alternative for the use of Stealth, easy to grasp, less rolling intense…what’s not to like? All things you can still complain about theoretically are direct results of the system-immanent complexity-decrease, and would as such not be fair.

Add to that the low and fair price point and we have a final verdict of 5 stars + seal of approval for the revised version of the Stealth Scale. Kudos indeed!!

You can get this inexpensive variant Stealth-system here on OBS!