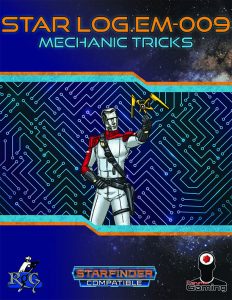 We begin this pdf with a brief introduction to the mechanic and the roles of the class, before diving straight into what we expected – new mechanic tricks! The pdf includes 3 different 2nd level mechanic tricks, the first of which would be Genius Mechanic. While spending at least 24 hours in a settlement, the mechanic may spend 8 hours as well as 50 times mechanic level squared in credits to create a genius mechanic fund. While carrying this fund, you are treated as having +2 bulk. You may, once per day, enact a brilliant plan. This allows you to withdraw from the fund in a 10 minute preparation, withdrawing any technological item or weapon that would have been available in the settlement used to shop for the brilliant plan, detracting its value from the pool. Item you could have crafted in the settlement’s resources may similarly be taken from the fund. The respective item’s bulk may not exceed 2 and the GM is the final arbiter of what works and what doesn’t. In essence, this is a crazy prepared ability, and one that has been improved regarding its verbiage.

Precision Demolitionist is amazing: When you attack with weapons with the explode weapon special ability, you may exclude up to 1 + Intelligence modifier (min 0) 5-ft.squares from the explosion – for 1 Resolve, you may double Intelligence modifier for the purpose of how many squares you can exclude. When missing, the ability does not work for the attack. NICE! Ranged Maneuvers lets you choose two combat maneuvers from dirty trick, disarm, reposition, sunder and trip. You may execute the chosen two maneuvers with melee or ranged attack rolls with a small arms weapon, provided the target is within your first range-increment. A further limitation to keep this in line is that the target’s environment needs mechanical devices or computers. The trick also has different synergy effects for drone and exocortex. Like it!

The pdf includes 4 8th-level mechanic tricks: Augment Explosive slightly increases the damage output of explosive weapons or armed explosives. Expanded Ranger Maneuvers builds on the previous trick and requires it, unlocking all maneuvers from the list. Explosive Trick is slightly problematic: “Whenever you use the dirty trick or sunder combat maneuver against an opponent…”, you cause an explosion as if you attacked the target with a grenade with an item level equal to your mechanic level and grenade type being chosen by the GM, depending on circumstances. When using dirty trick, you also knock the target prone on a failed save, while sunder adds damage to the targeted object. While the ability needs a 10 minute rest and1 Resolve point to regain a use, I do think that the trick should specify that the dirty trick/sunder attempt actually must hit – RAW, the trick does not require that you actually hit the target. The last 8th level trick is Improved Genius Mechanic, which lets you spend 1 Resolve to enact another genius plan within 24 hours after you have executed the first. I *assume* that this still requires that you have sufficient funds to do so.

The pdf also has a single 14th level mechanic trick, Penetrating Demolitionist. When you arm an explosive, you can attempt an Engineering check to assess the structural integrity of every vehicle and object in the explosion radius. The Engineering roll’s result is then compared to the Engineering DC of those. Items and structures are assumed to have a DC of 20, vehicles 15 + 1.5 times the vehicle level. On a success, you detract your mechanic level from the item’s hardness. Thankfully, it does not stack with other DR/hardness/etc.-reducing options and the DC-fixing helps to maintain rules-integrity.

The pdf also provides quite a few nice angles regarding the roles of mechanics in the Xa-Osoro system shared by Rogue Genius Games and Everyman Gaming.

Editing and formatting are very good on a formal level. On a rules-language level, a few components could be slightly tighter, but as a whole, my complaints boil down to nitpicks. Layout adheres to the ncie two-column full-color standard of the series and the pdf sports a nice artwork. The pdf has no bookmarks, but needs none at this length.

Alexander Augunas provides some really cool mechanic tricks, with the explosive-tricks in particularly being rather neat. While the genius plan-sequence of tricks could be a bit tighter, I consider this one to be worth owning. My final verdict will hence clock in at 4 stars. EDIT: The improvements add +0,5 stars, but I still feel like this is closer to rounding down.

You can get these mechanic tricks here on OBS!