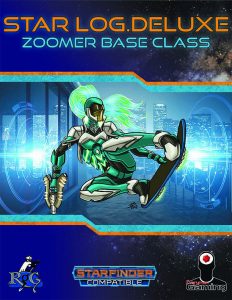 This supplement clocks in with the usual introduction, which also contextualizes the class in the context of the Xa-Osoro system. The zoomer’s key ability modifier is Dexterity, and the class gets 7 HP and 7 + Constitution modifier stamina. The class gets 6 + Int skills per level, with Acrobatics, Athletics, Engineering, Perception, Physical Science, Piloting and Profession as class skills gained. The zoomer class gets a free skill rank in Acrobatics and Piloting at each zoomer level, as well as Skill Focus in them both. Furthermore, the bonus granted increases by +1 at 11th level “land” 8should be “and”) every 4 levels thereafter. This puts the zoomer, skill-wise, on par with the operative.

Proficiency-wise, the zoomer gets light armor, basic melee weapons, grenades, small arms and full BAB-progression as well as good Ref- and Will-saves. The zoomer begins play with the Deadly Precision feature, which nets a bonus to damage rolls with small arms, thrown weapons (except grenades) and operative melee weapons equal to Dex-mod (min +0), capping at zoomer class level. At 3rd level, if you have Weapon Specialization with small arms or operative weapons, you add class level to damage with them, +1/2 class level in other classes. This is relevant since 3rd level nets you Weapon Specilization for all weapon types this class nets you proficiency with. This bonus damage does not stack with bonus damage from attacks made as part of a class feature. Also at first level, we get the jitters ability, which is a +1 bonus to initiative that further increases by +1 at 3rd level and every 4 levels thereafter.

The most important starting ability, though, would be the zoom dash – either granted by a freak accident or tech. If you choose gear, it does not influence slots available and merges with footwear. This gear may be replaced via Engineering, but it is…well, tech. Supernatural sources of this ability are subject to appropriate limitations. The ability increases your land speed by 10 ft., further increasing this by +10 ft. at 3rd, 9th and 15th level. 2nd level nets evasion.

5th level provides the zoomer’s advance ability: You can spend 1 Resolve Point as a swift action to move up to your speed; at 9th level, you may spend 2 Resolve Points to move up to double your speed as a swift action; 13th level upgrades this to triple speed for two Resolve points, but triple movement requires a move action. At 17th level, you can move quadruple speed as a move action for 2 Resolve points. This may not be used while encumbered, in power armor, etc. 7th level provides the operative’s uncanny agility, i.e. immunity to the flat-footed condition and foes don’t get bonuses for flanking you or attacking you while prone. Covering and harrying fire also don’t provide benefits against you. 1th level nets zoomer’s onslaught – as a full attack, you may make up to three attacks, at -6 penalty. The capstone doubles your speed when you charge, run, withdraw, and you may run a s a swift action sans provoking AoOs, though this swift run requires a 10-minute rest to use again.

At 2nd level and every 2 levels thereafter, the class chooses a zoomer stunt, basically the talent-array of the class. 8th and 14th level serve as caps where new zoomer stunts are unlocked. These allow for e.g. ending a charge with a small arms weapon or a thrown weapon, which still provokes AoOs – however, you may end a charge 10 ft. prematurely, provided you moved at least 10 feet. Better snap shot attacks and vehicle-born firing, expanding the edge…and really interesting, not counting as prone while crawling and retaining the zoom dash bonus to crawling speed make for interesting tricks. A more flexible charge contingent on Acrobatics and enemy CR is okay, and I liked preparing two actions to ready, with concise restrictions. Using reactions prior to acting for the first time in combat, and quick assertion of control over a vehicle is interesting.

Among the stunts unlocked at 8th level, you can catch targets off guard via charges, provided you succeed an Acrobatics check, non-stacking concealment when moving, guarded step, limited auto-haste, upgrading class features further – some cool tricks here. (As an aside: there is a slightly confusing type here, one that notes “reading” instead of “readying.”) Another issue here is that there is one stunt that allows the zoomer to forego readying three triggers to ready a full action. This is problematic, since readying an action is a standard action. Note that RAW, readying actions can only be done via a standard action, preventing cheesing here. The highest level stunts unlocked at 14th level include, among other things, improved evasion and a further upgrade for the movement contingent miss chance. Most mechanically interesting would be the zoomer whirlwind, which has a radius and area of effect contingent on speed, with maximum number of targets affected also defined by this. A handy mini-table helps here, and the effects differ for e.g. whirlwinds made on liquid. The ability is, design-wise, precise, as the base ability codifies skill checks and saves, if any – these are governed by Dexterity, fyi.

The class loses zoomer stunts for multiclassing at 2nd, 4th, 6th, 12th, and 18th level. At 9th level, the pdf notes “Your zoomer’s advance class feature improve at 9th level.“ – There is a “doesn’t” missing here.

Editing and formatting are pretty good on a rules-language level. On a formal level, there are a few hiccups here that could have been caught, some of which may cause a bit of confusion. Layout adheres to the two-column full-color standard of the series, and the pdf sports solid full-color artworks of Jacob Blackmon’s characteristic style. The pdf has no bookmarks.

Alexander Augunas’ zoomer is a fun class that won’t break your game. It focuses on agility and skirmishing, and does so in a rather interesting manner. The zoomer’s mobility makes the class pretty potent, but not to an extent where it eclipses e.g. operative or solarian etc. Their charges can be deadly, but the focus on these does limit them somewhat. All in all, I liked this class, though I felt it could have used a few more tricks like the whirlwind. All in all, I consider this to be a solid, if not perfect class, worthy of a final verdict of 4 stars.