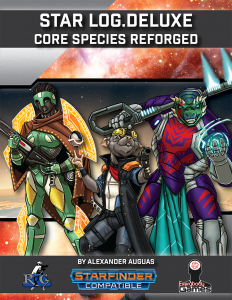 This supplement clocks in at 25 pages, 1 page front cover, 1 page editorial, 2 pages of SRD, leaving us with 21 pages of content, so let’s take a look!

After a brief introduction, we begin with the reforged base engine, for buying ability scores works slightly differently:

Write down all 6 ability scores, and put 10 next to them. You get an ability boost, which you assign and can’t reassign sand a mnemonic editor or the like, and add 2 points to the ability score. You can also choose a flaw, which means you need to subtract 2 ability points from a chosen ability – if you do that, you get another boost, and you may not apply a boost and a flaw to the same ability score. A species’ vital traits entry lists the ability scores you can boost, but flaws remain yours to freely choose, at least usually. Then, you apply the theme’s ability score increase, and after that, you get 10 point to customize your character on a 1-for-1 basis. You can spend these however you want, but at the game’s start, ability scores cap at 18. Points must be spent and can’t be saved for later.

Simple, right? So, how does the engine proceed to work? Well, each species gets its vital statistics, which note the eligible scores for ability score boosts (and flaws, if relevant), the Hit Points, sizes, speed, sense traits (designated with the word “sense”, inherent abilities (designated as “inherent”), heritages (which may be specific or universal), and the character chooses two species traits, chosen from the character’s species or the “universal” list. The character gets an additional species trait at 5th level and every 4 levels thereafter.

Okay, to give you an idea: Androids, for example, have the HP and size/type of the modeled species, with the android subtype, low-light vision, use their modeled species as ability boost guideline – this modeled species is chosen at 1st level. However, you only get to choose from the android and universal heritage, not that of your chosen species. The android-specific  heritage provided renders you immune to vacuum and eliminates the need to breathe, as well as providing a +2 racial bonus to saving throws vs. diseases, mind-affecting effects, poison and sleep due to having a higher amount of artificial components than biological ones. To contextualize this one, we should first take a look at the universal options available, right? Right!

The pdf first specifies two general subtype-y categories here – planar scion (self-explanatory) and kabeni; the latter represents individuals associated with undead, death magic, etc. These often include +2 racial bonuses to two skills for the planar scions, as well as resistance that scales: Aasimars, for example, get ½ their level or CR as a resistance to acid, cold and electricity. Planar scions generally change the type to outsider and gain the native subtype. Aasimars can, as a standard action, shed light, with dismissal noted, and this light can beat magical darkness, provided the origin’s CR or item level exceeds the aasimar’s – oh, and daily uses increase with level or CR. Duskwalkers are infused with the powers of purgatory, and are treated as having the ghost killer weapon fusion versus incorporeal undead, and these people get bonuses to saves vs. death effects and negative energy as well as re undead abilities. Yep, the classic ones like ifrit and undine are covered alongside the ganzi, and half-elf and half-orc can also be found here…and yes, you can be a kitsune with a half-elf or half-orc form! Cool, btw.: The ifrit get azimuth laser pistol integrated weapon blasting, including recovering charges – and yep, the ability upgrades properly at higher levels. Ganzi can get the Resolve-powered ability to force rerolls with their quibble ability. Being a skinwalker is btw. also one of the choices you can make, and being nograv-raised (Hello, The Expanse!) – also covered!

Now, it should be noted that the list of the universal traits actually makes you pay for the like – want to get the +2 skill bonuses or the resistance/save-bonuses for being a planar scion? You have to pay for them with one of the species traits you have. And these could also be used for being adopted: That’d let you choose a species and their culture, and reduce the DC of it by 5; you also can learn traits associated with the ancestry, provided it doesn’t require physiological traits you lack. If you’re a planar scion, you could also be ageless; if you’re a changeling, you could have a swimspeed and expanded lung capacity…or, you could be capable of surviving in space…or, perhaps you inherited dark eyes that can pierce through illusions, or you could control ambient atmosphere. Want to be able to speak with animals? That’s now universal as well, and same goes for a prehensile tail – makes sense in a world when augmentation is common, right? I certainly think it’s cool to have these all be options.

Let’s return to the android traits, shall we? These include augmentable (+ cybernetic augmentation for a system of your choice), infosphere integration lets you once per day when taking a proper rest choose a mental ability score-based class skill, or enhance that. Another trait lets you have a rebooting nanite upgrade in your brain, allowing you to reboot your brain (rerolled save!) via Resolve if suffer from a variety of conditions. Using Resolve to temporarily gain scaling fast healing…or what about your modeled species’ senses? Very much possible.

But there’s MORE to this than just modular universal traits and species traits. Know the realization that prehistoric humans are pursuit predators? That we are super-hardy and scary in comparison with other species? Well, humans in this system actually have that represented via the Pursuer ability! It’s great to see that type of information represented in the game. And there are coolnes here: Adrenaline Junkie, for example, nets you 2 temporary Hit Points per level or CR for 1 Resolve that don’t stack with themselves at the start of your turn, provided you are sufficiently stressed, so the GM has final say. Better harrying/covering fire and aid another, the option to shrug off fatigue and exhaustion, and more….what about, for example, delaying the onset of a saving throw-related effect for one round, at the cost of treating your result when you are affected as a natural 1, and the effect bypassing any immunities gained since activating the ability – so yeah, powerful, you won’t be cheesing this. Love it. This is also a good place to note the attention to detail in some of those: It bespeaks of extra care when two abilities that focus on representing teamwork (like those of humans and lashunta) actually feel and play differently.

Kasatha might be natives or starfarers, and includes drawing strength from your personal traditions, and what about using solarian weapon crystals as fusion seals? Lashunta are dimorphic, which partially affects the ability boost, with heritages being academic or psychic. The traits include being particularly adept at tackling insect races, and yes, you can have a Companion Creature Adept dinosaur!

Shirren get no less than 4 heritage castes to choose from, which include short-term flight (upgrades to unlimited at a proper level), better social skills and feinting, quicker Stealth, etc. – really cool. Oh, and you can be a combo caste with the right trait! What about an acidic, conical breath weapon that can’t be spammed? Obsession, communal spirit, natural weaponry? All covered. The latter are optional here – for the vesk, they are obviously inherent, and these also get a serious overhaul, with versions with flexible tails, better adaptation to water or venom as heritage options. And yes, the vesk venom is properly depicted. Know what I really loved seeing? You know, Starfinder is pretty meticulous regarding damage types – with the weird and nonsensical exclusion of natural weapons. Well, this pdf is actually more precise than the core rulebook and properly codifies damage types of natural weapons. I LOVE IT.

The ysoki’s rebuild is particularly interesting, with heritages to represent more anthropomorphic or therian ysoki; we have increased speed, quick scurrying on the floor, better flanking – in short, ysoki can become pretty darn agile and dangerous. And if you never liked them being frail – what about the trait that nets you an upgrade to 4 HP and Toughness? Yep, nice!

Conclusion:
Editing and formatting are very good on a formal and rules-language level. Layout adheres to the series’ two-column full-color standard, and features quite a few really nice full-color artworks. The pdf comes fully bookmarked for your convenience.

Alexander Augunas’ core species reforged are AWESOME. While they system-immanently allow you to create more specialized characters, the changes made to the species don’t hurt the balance of the game overall or jeopardize the implicit balancing assumptions of SFRPG. The species allow for a degree of customization that makes me really happy, and they become, well, more distinct. Indeed, as a whole, I think this supplement will actually prove beneficial regarding the balancing of races, and the planar scion options? Awesome. Come on, you know you always wanted to play a hardy duskwalker ysoki operative, or an aasimar vesk solarian!

The modularity proposed by this system is really cool, and the way in which it differentiates between the purely biological baselines and cultural aspects also helps you emphasize different stories. It is also full of those little flourishes in the details that show that the author really CARED. When a lesser author would have used one ability and copy-pasted it to several species, here, we have fine differentiation and tweaks that FIT the species and enhance their flavor.

The traits provided say a lot about the respective cultures…what’s not to like? I *ADORE* this booklet, and am really happy to see it, and know that I’ll get more out of this than just utility for my SFRPG-games!

Why? Because the system proposed herein, while finetuned for SFRPG, is also compatible with the one employed in Everybody Games’ upcoming Eversaga RPG, and having this level of flexibility for two systems? NICE. It works smoothly, is rewarding, and, most importantly, fun.

In short: This is a must-own book for fans of SFRPG. 5 stars + seal of approval, and this is now an EZG-Essential. Every SFRPG-campaign I run will use this. Also: Candidate for my Top Ten of 2020. Simple, elegant, rewarding. An inspired gamechanger that makes all species more versatile and rewarding.

You can get this brilliant take on modular SFRPG-races here on OBS!

If you enjoy this design-paradigm and love it as much as I do, you might want to think about supporting the author’s Eversaga RPG here!

If you can, I’d be grateful about a tip or about joining my patreon. Thank you.