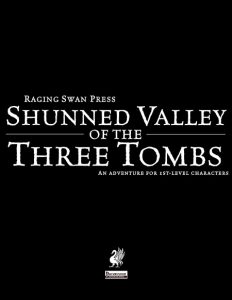 This adventure clocks in at 28 pages, 1 page front cover, 2 pages of advertisement, 1 page editorial, 1 page ToC (including tables for statblocks by CR), 1 page SRD, 1 page back cover, 1 page of advice on how to read statblocks, leaving us with 20 pages of content, so let’s take a look!

This product was moved up in my review-queue as a prioritized review at the request of my patreons.

All right, so what do we get here? Well, first of all, we get a incredibly gorgeous b/w-map of the Duchy of Ashlar: The cartography by Simon Butler, Dan Dyson and Tommi Salama employed herein is…well glorious. Oh, and guess what? If you’re like me and get a LOT of Raging Swan Press books to supplement your gaming experience…you’ll notice something. The map tells you, which direction the lonely coast is, where deksport can be found – and indeed, in this duchy, you can see Wellswood, longbridge, ashford -some of the unique villages and places my groups have visited and come to love (or abhor) – oh, and the map also sports a wide array of as of yet unexplored places. And, in case you’re asking – this whole region, contextualized, can easily be dropped into just about any campaign setting, though theme-wise, settings like Greyhawk, The Lost Lands or the like probably work best – and yep, the Shadowed Keep of the Borderlands is also mentioned.

There is a second important thing to note about this module: It is explicitly made for (relatively) new players – Core is assumed to be known, but that’s basically about it. Hence, the challenges in this adventure are somewhat less pronounced than veterans would expect. At the same time, it should be noted that this pdf does not necessarily feature themes explicitly designated as “kid-theme” – it is not gory or grimdark or anything…it is just fantasy. I tested this module with my kid-group and ran into no issues. This is very much an adventure that allows the GM to utilize tropes of adventuring and fantasy, but sans being inappropriate. So yes, I’d consider this appropriate for all but the youngest and most sensitive of kids. The pdf also provides extensive scaling advice for each encounter – by +1/-1, which means that you can also run this for more seasoned adventurers sans the players becoming bored. One more thing – while this module introduces PCs and players to some of the classics, its structure allows the GM to include ample options for rest…or not, allowing for pretty concise control over the pacing of the module itself. And no, thankfully my most loathed adventuring clichés, the shadow and ogre bosses are absent from these pages. Thank Gygax!

All right, only GMs around? Good. We begin this module in the town of Dulwich, with 3 basic adventuring hooks and 4 entries of village lore being provided – this, as a whole, sets the stage for the motivation to explore the valley. A table of 6 rumors, some of which are false, some of which are correct, provide further information and, as a whole, this section of setting-up the module already indirectly teaches the value of doing one’s legwork. The overland journey by movement speed has convenient travel durations noted and sports the option of getting lost. a brief 12-entry table of minor events during the journey features mechanically-relevant, fun little encounters that range from woodland critters to deep gulleys and streams.

The valley itself can be pictured as one that sports, obviously, multiple tombs – said tombs are the mini-dungeons in this book, but they are not the only graves there: Cairns can be looted and a table of items can be found there. Similarly, an 8-entry dressing table for the valley allows you to customized the dressing and generate more atmosphere. From the small waterfall to tracks, the valley has several interesting locations as such – but the interesting component, at least to me, would be that the mini-dungeons (usually only a couple of rooms) sport unique challenges: In the tomb of the stone woman, one can, for example, face an animated statue, with some traps that are painful, but not necessarily lethal, teaching this component of adventuring. And yes, from chests to sarcophagi, the level of detail provided in this pdf is excessive and makes running this very easy.

The tomb of the champions features unique adversaries and has a completely different flavor – inside lie the now undead remains of two erstwhile champions of the hobgoblins, emphasizing the component of combat in the exploration here. Finally, there would be a third mini-complex, wherein an owlbear and its young lair – these caves can be seen as introductions to animals and terrain – with bat guano, a bat swarm, uneven footing and the like, the focus here is admirably different.

This, however, is not nearly the extent of adventuring the pdf contains – beyond fully depicted random encounters, the module also sports a rival adventuring group that can act as a major complication for the PCs, feigning friendship and loyalty, while waiting to backstab them. Beyond these low-lives, there is another optional encounter that will introduce the necessity of ROLEplaying to PCs and players alike: The ghost of a perished adventurer haunts this valley’s lake and putting her to rest is one of the more unique challenges in this pdf. It’s not hard, mind you – but it makes it clear that sometimes, words are more powerful than thrown spells and drawn swords. These add-in-encounters, including an owlbear, obviously can also be used to save the PCs – if the aforementioned adventuring group’s too much to handle…well, then the arrival of a pack of wolves or said owlbear may act as a save…and teach the valuable lesson of considering that the world is dynamic. (Fyi, in case anyone wondered: My kids are worse munchkins and power-gamers than my adults and walked all over the combat challenges…but still had a lot of fun, particularly relishing the chance of putting the ghost to sleep!)

Creighton Broadhurst’s Shunned Valley of the Three Tombs is a great example of a first level module I would have loved to have back in the day. Why? Because it actually teaches the basics of adventuring. Watching for traps, not assuming that violence is always the solution, taking care of terrain, knowing that the world’s dynamic…all those important little lessons are taught in a pretty concise manner by showing, not telling. The challenges are sufficiently moderate to make sure that the players don’t get wiped out while learning these, though this does not mean that they can act foolhardily: This is an adventure and as such, it sports danger. Now granted, veterans may not necessarily be too blown away by the mechanic components, but the dressing and atmosphere may make this a feasible option for these as well, particularly if they prefer a campaign’s start to be less lethal than the things to come.

Beautiful in its simplicity and level of detail, this is a great introductory module for the game we all know and love – and for this purpose, it should be considered to be a 5 star+ seal of approval module. Veterans and grognards who have seen it all may be slightly less intrigued, though the old-school vibe and aesthetic employed here may tug at one’s heart’s string. Still, for experienced and jaded audiences, this may be slightly less compelling and should be considered the equivalent of a 4 star module. One final note: Fans of Raging Swan press need this module -the contextualizing map of the duchy is awesome and truly evocative!

You can get this fun introductory module here on OBS and here on d20pfsrd.com’s shop!

You can join Raging Swan Press’ patreon here and never miss a supplement!
Endzeitgeist out.